It's okay, one day all these movies will wash away... like tears in rain. 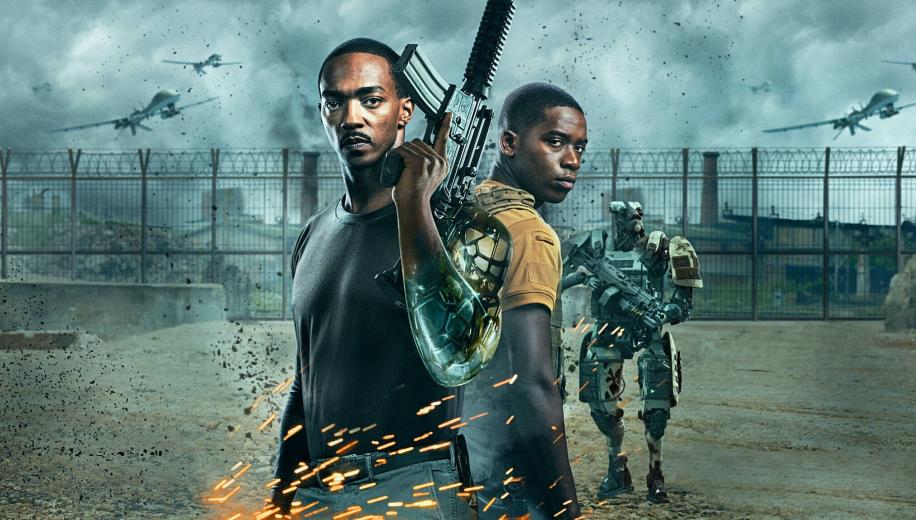 Do you fancy a quiet Netflix night? A bit of take-your-brain-out action with a named star and a director with a penchant for kooky nonsense? Like Extraction, yeah? Yeah, this is no Extraction.

Outside the wire there is a civil war going on in Ukraine between the US peacekeeping forces, the Russians, the Russian sympathetic insurgents and the Ukrainian freedom fighters. But also outside the wire is Viktor Koval, a rebel leader with a thirst for world domination. Disgraced drone pilot Lieutenant Harp must accompany man-machine Leo outside the wire to retrieve some nuclear launch codes which have gone missing outside the wire and which Koval intends to use to fire a nuke at a major city in the US (presumably inside the wire). Are you sick of reading the phrase ‘outside the wire?’ Well, welcome to the first 30 minutes of Netflix’s new sci-fi actioner where the title of the movie is said out loud no fewer than six times.

From Mikael Håfström, the director who previously brought us the enjoyably daffy Arnie/Sly vehicle Escape Plan, comes Outside the Wire, a film about how maybe the US Army aren’t always the good guys and how, like, drone pilots don’t care about the people they remotely explode and how having robots that look like people might maybe raise questions of whether they should be considered human…or more human than human. It’s all highly original stuff.

Mackie actually does a great job of mixing charisma and menace, despite obviously phoning it in.

Attempting to breathe a little life into proceedings as Leo, a sort of Alonzo by way of the T1000, is Anthony Mackie (The MCU’s Falcon), the first robotic soldier who can pass as human. Mentoring or manipulating Harp (Damon Idris – Black Mirror / The Commuter), Leo tests the boundaries of his restrictive programming in order to complete whatever mission he has. Mackie actually does a great job of mixing charisma and menace, despite obviously phoning it in, but his character’s trajectory is too clearly signposted for him to have any space to develop some nuance. As Harp, Idris is all over the place, bouncing between scared weakling and strategic mastermind depending on the scene. It’s hard to place the blame solely at Idris’s feet for the unsympathetic and unengaging nature of the central character – he really had very little to work with – but he’s green, especially when compared to Mackie’s consummate professionalism. (He’s used to saying stupid things in films that make no sense, after all.)

Doing a welcome bit of acting is Emily Beecham (Into the Badlands) as Sofiya, the leader of the liberation movement. A wry smile and subtle threatening edge tell us she’s probably a bit too good for this nonsense.

Also welcome are the designs of the robot soldiers – or ‘Gumps’ as they’re known for no given reason – which are pleasingly Boston Dynamics inspired. Atlases and Dogs with guns that move in a crunchy, almost stop motion way. This, along with the sort-of-neat, Ex-Machina-y design of Leo are the sole little visual flares that the film has going for it as the majority of the rest of it is just a big dull, grey, splodgey mess.

The whole film is so genuinely visually unappealing and unengaging that the plot just gets totally lost in a fog of low budget CGI explosions and dust. What happens in the film is very straightforward. I can tell you what happens, scene to scene. Quite why any of it happens or how it is orchestrated remains a complete mystery to me.

The whole film is so genuinely visually unappealing...

The action scenes are overlong, slow and badly choreographed. You can set your watch by the regularity with which the cuts occur: it's one a second. And wow, if it isn't repetitive. I don’t mean repetitive as in ‘the characters go to one place, have a gun fight, go to another place, have a similar gun fight.’ I mean within action sequences there is rote repetition. Example: Harp, caught under fire, escorts hostages to the front of a building where they promptly escape. Only for a second group of different hostages to emerge from the building behind him at which point, again under heavy fire, Harp must go through the same duck-and-cover ‘stay down stay down’ motions to escort them to a different place of safety. This all happens shortly before a dark turn of events has him having to escort hostages from… Oh god, I’ve bored myself just remembering it.

Fine, so there’s nothing heinous about Outside the Wire but, in true Netflix style, it is aggressively mediocre.

Outside the Wire is available now on Netflix.