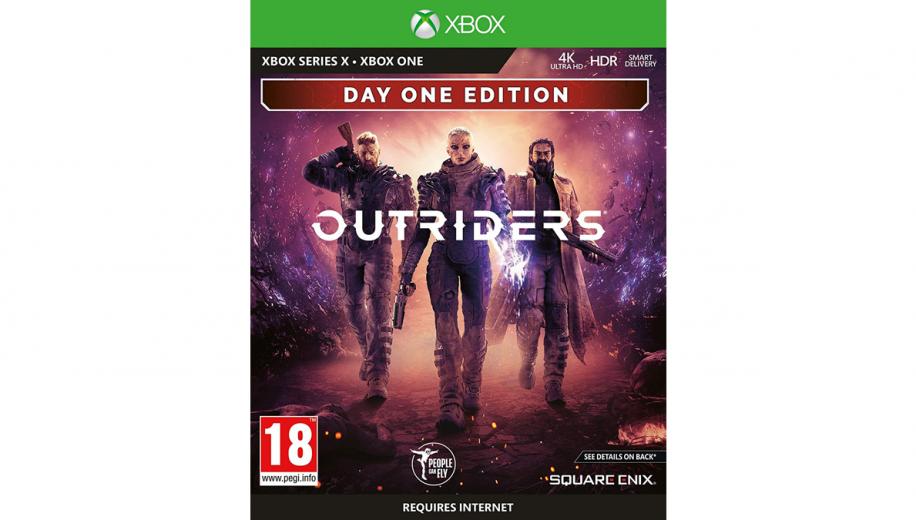 Developed by People Can Fly, the talented folk that have previously worked on Gears of War: Judgment and made a name for themselves with the excellent Bulletstorm, Outriders is a game that’s easily compared with numerous other shooters and RPGs (Destiny, Borderlands, Diablo and so on), but succeeds mainly by taking the best bits from a variety of those differing worlds. It’s playable entirely on your own, or with drop-in co-op for up to three players – including crossplay between platforms (mostly). It’s not a shared world, so you won’t see other players doing their own thing as in the likes of Destiny 2, but the online option does demand you’ll need a constant connection to play, even if you’re only ever planning on flying solo.

The inherent risks with an always online title were seen on launch, when server issues left the game frequently unplayable over the first three days, with crossplay between PC and console gamers also disabled due to teething problems. Busy servers at launch are no new thing, and certainly we’ve become accustomed to games enduring a rocky start, although that doesn’t mean we have to be willing to accept it as any kind of ‘norm’. That said, for all of its initial strife and a few other tech issues to be ironed out, Outriders still managed to leave us captivated and hungry for more.

The game is set years in the future, with what’s left of mankind having fled a dying Earth for life on a new planet. After a strange power destroys the idyllic landscape and pretty much everyone on it, you’re left wielding special abilities and a damned cool arsenal of weapons with which to unlock the planet’s secrets and give humanity a chance to stop being routinely slaughtered for a good few minutes at least. If you’re just here to shoot stuff, then the story can seem fairly trivial and generic – and at times it can be rather poorly told through some stuttering cutscenes – but there’s an absolute glut of lore and a rich and immersive tale to unfold if you’re willing to pay attention (mostly through the game’s collectibles). But, of course, most of those playing Outriders will be more interested in killing things rather than tracing their heritage, and the good news is that this is where the game really excels - even if it can take a few hours to really get into its stride.

It’s a very familiar weapon and outfit set-up (think Destiny 2), enhanced by a great array of mods that add all manner of perks (think Borderlands 3 meets Diablo 3) – so, of course, that sweet, sweet loot to constantly upgrade your armoury is the ever-important driving force behind the game. There are no health packs and so using the right mod’s status effects while killing things is usually the best way to save your life.

That sweet, sweet loot to constantly upgrade your armoury is the ever-important driving force behind the game"

That’s not to say that Outriders needs to be an aggressive run-and-gun shooter, although you are absolutely free to treat it as such, but equally you can equip yourself with a sniper rifle and keep your distance where you can. Certainly if playing in co-op it can be hard to avoid, as general matchmaking tends to become a race to the finish line, but teaming up with a couple of like-minded comrades can make Outriders a hugely satisfying and even more rewarding experience.

There are four playable classes to choose from, each with their own special abilities and a skill tree to further fine-tune their powers. Thankfully, these powers have a fairly short cooldown clock, and so you’re free to use them almost constantly while looking to maximise some cool combinations – either within your own weapons and mods or with other classes in co-op (the Trickster can put enemies into temporary stasis which the Pyromancer can then ignite, for example). Regardless of choice, you can tailor your loadout to suit any style of gameplay – even if the simple art of killing lots and lots of bad guys rarely changes or offers much you haven’t seen before. Play It Your Way

The gunplay is mostly excellent, combining toe-to-toe carnage with the scope for thinning out a crowd of foes one at a time from distance. They’re rarely the sharpest tools in the box, but the AI is a rich mix ranging from bullet-sponge tanks who’ll charge you down to snipers who’ll keep their distance and even call-in airstrikes or spam grenades with infuriating accuracy. Making good use of cover can help, with a system seemingly inherited from the dev’s Gears of War days, meaning that it’s decent enough but it does have a habit of being sticky when you don’t want it to be and not sticky when you do.

Although wrapped up in the nice illusion of an open world, Outriders plays out almost entirely as a corridor shooter linking a steady cycle of arena battles – to the point where if you find a short path leading off your current quest and don’t find a loot chest, collectible or some other reward at the end you can feel rightly disappointed. The many side-quests on offer are all sectioned off behind loading screens, which might seem a little off to the traditional RPG gamer who’s used to overlapping missions or stumbling across quests by accident. However, having everything broken down into more bite-sized chunks does make things rather more manageable, so one quest doesn’t lead into a three-hour rabbit hole which isn’t always ideal for a co-op party. In co-op, the difficulty is increased accordingly with more enemies on the field – although in general just having two other players for the bad guys to point their guns at, plus the ability to resurrect fallen comrades, makes it an easier proposition than going it alone. However, one great feature of Outriders is its World Tier system which enables you do adapt the difficulty on the fly. Similar to that seen in the likes of The Division and Diablo 3, unlocking new tiers gives the option to fight against tougher enemies for greater loot rewards – with progression to the higher levels perhaps something more for your endgame progress once you've unlocked the coolest upgrades and enough resources to truly maximise your potential.

The notion is that you’ll upgrade the World Tier in line with your growing abilities and suitably levelled-up kit. The reality is that you’ll cruise through a few levels before maybe finding a comfort level (until you find a new favourite weapon combo that can handle the higher level enemies), and then maybe drop it back down a level or two for a particularly hectic battle or boss fight, because there are plenty of moments where the sheer number of enemies or the ability of some foes to absorb a ridiculous amount of damage (while dishing out huge amounts of their own) can become somewhat infuriating, so you can choose to smash through it if you’d rather not persevere - and then up it again when you’re done.

This adaptable difficulty level certainly adds to the replay value, including the end game content which delivers 15 Expeditions, which are basically extended and super-tough missions where loot is only given upon completion (but plenty of it) – making success at increasingly difficult levels hugely challenging, but also hugely rewarding as you look to level up your kit to the max. This is further supported by an excellent crafting system that can help turn a simple ‘common’ weapon into a Legendary death dealer if you’re able to amass the right resources to pay for it, although it really becomes more of a feature for the later stages as you’ll find better weapons pretty frequently for most of the campaign.

In-game the visuals are pretty strong for the most part, with a nod to the game’s HDR10 performance further enhanced by the optional ‘High Contrast Display’ in the menus that bolsters the blacks and can really help to bring the colours to life. The resolution ranges from 1080p and 30fps on the standard Xbox One up to 4K UHD at 60fps on the new-gen consoles and PC (with the likes of the Xbox One X offering 1944p upscaled to 4K). The framerate can drop out when things get hectic, notably when you’ve got three players dropping all manner of powers and status effects on screen, but we were typically too engrossed to really notice. Not so in cutscenes, though, which can look good but also stutter rather too frequently and often seem poorly linked or are topped and tailed awkwardly in ways that don’t really do the material justice. There are plenty of them, too, including some pointless links into new areas and the game is somewhat stilted by loading screens, some questionable checkpointing and a tedious process to travel around the world map, giving some short bursts of action a rather stop-start feel.

The third-person perspective works really well for the most part, but it can lose track of the action when things get close and personal. At times we were swarmed by enemies and our hero disappeared off the bottom of the screen, making it almost impossible to do anything but spray-and-pray. It’s made all the more annoying because you can’t push past enemies and you can easily get trapped in a corner with various control options seemingly a little less responsive under pressure. There are several other examples of what might be considered tech glitches or minor inconveniences, suggesting the devs have plenty of patchwork to do beyond just keeping those servers up and running.

However, once those launch issues had passed there was certainly nothing game-breaking to detract from our enjoyment and even with plenty of replay value – the core content is a good 30+ hours, multiplied by the four characters and replaying missions and Expeditions at tougher levels with various allies for increasingly bigger and better rewards – we were left wanting more. With plans for substantial DLC (as opposed to more piecemeal ‘games as a service’ content) and lots of potential there could be a lot of life in Outriders still to come. Although not without its flaws, Outriders is one of the most enjoyable action experiences we’ve played for some time, and should easily satisfy those Destiny or Borderlands veterans looking to scratch that shooter-looter itch. The gameplay can be fairly repetitive and doesn’t offer much that’s new, but the constantly upgraded weaponry and a rich assortment of hugely effective mods and abilities manages to keep things feeling fresh.

The option to tailor the single-player experience to your own level and playing style is welcome and well-polished, although teaming up with friends or strangers in co-op can be a lot more fun and rewarding. With a good 30+ hours of in-game content, plenty of replay value and the clear potential to evolve and expand in the months ahead, Outriders could be a game you’ll find yourself coming back to for some time to come.