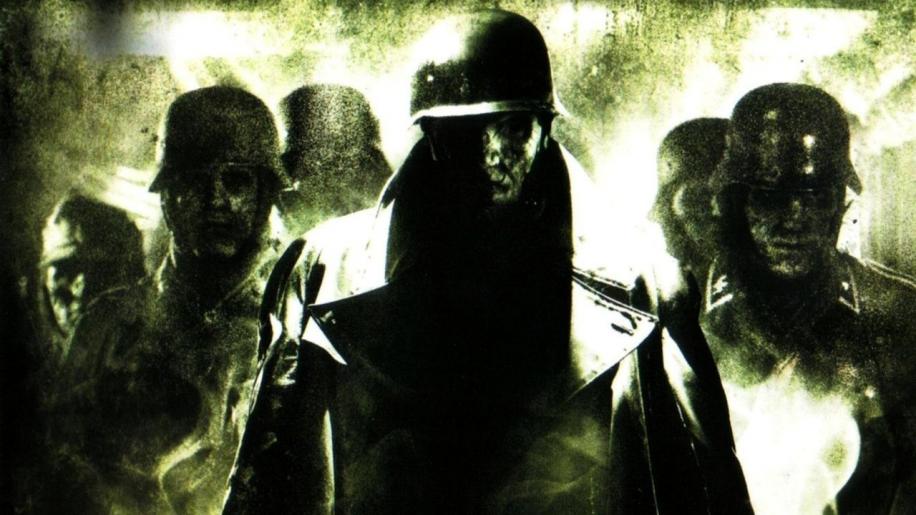 In May of this year I had the opportunity to catch a viewing of the independent venture Outpost. Unfortunately the check disc we received at the time wasn't up to the usual high quality we at AVForums Movie Reviews demand, but now I have a copy of the real deal in my hands so I'm going back to the original review to update it. Obviously the story remains the same...

Earlier this decade Arabella Croft and Kieran Parker staked everything on a straight to disc low budget horror. Initially released in the U.S. only on SD DVD it got some worthy praise, worthy enough for Sony to step in and offer them cash for exclusive rights to a cinema release back in good old Blighty. Black Camel Pictures and their PR team have kindly given us a check disc to see what this furore is all about.

Set in a devastated Eastern Europe a group of mercenaries are hired by a British businessman, Hunt (Julian Wadham); their mission to get him into an area, presumably searching for lost Nazi Gold, and get him back intact; their fee, 5 grand per man as long as Hunt returns safe and sound. The head of the mercenaries DC (Ray Stevenson) takes a couple of days to get his team together, only one of whom Prior (Richard Blake) has worked with before. The rest are your typical hard nosed, brutal, rag tag bunch amalgamated into a small fighting force and whom DC occasionally has issues with. Eventually with DC appearing apprehensive on the overland journey they get to their prize, an old Nazi bunker.

The reasons for their trip slowly become apparent; there is no Nazi gold, in fact the raison d'être for their journey is a machine which has the mysterious powers not only to warp time and space but ultimately to help produce an indestructible army levelling all before them and on further inspection the bunker is not all that it seems. Their mission to be in and out of this war torn hell hole in 48 hours has just been extended.

Steve Barker directs Outpost and for this low budget horror he does an erstwhile job. The film has fantastic pacing revealing information only when it has to yet no leaving the viewer for long periods wondering what's going on. Every ten or fifteen minutes further information is uncovered carrying the film and the viewer's interest forward. For a low budget feature it uses its limited finances extremely well, essentially only using 2 locations; the brief cafe scene near the start where the deal is done and the bunker where most of this film is shot. Makeup for the dead and unburied within the bunker is excellent with costume design on the mercenaries and the scientist/businessman fitting well within the scope and intent of this feature.

It's a combination of horror, and at times brutal horror, and siege and it is the latter of these two which reminded me so much of a very early John Carpenter and his Assault on Precinct 13. It creates the same atmosphere, the same sense of claustrophobia and the same sense of urgency that something has to be done to survive. As Carpenter flourished on low budget features for sometime I can only hope that the writers behind Outpost have the same sense of imagination and commitment; I would have to say that Outpost is a very promising start. Creating the siege are Zombie Nazi's from the 1940s, now bare with me here. On first inspection this does seem a little ludicrous but then what doesn't in most films we see in the cinema or on our screens. Ark retrieval anyone for Indiana Jones?, indestructible psychopathic killers from either Jason or Michael Myers? Yes we suspend our disbelief and that's what we asked to do here also.

And once that disbelief is suspended the viewer is rewarded handsomely. The premise is the Nazis are using this experimental bunker to create the ultimate race, the ultimate army, far beyond their own aspirations their intent is to create an army populated by soldiers who would never die. This is slowly revealed throughout the film with some very disturbing scenes; visions of experiments on humans, killing them, disposing of the bodies in piles in one room. And it is in this room that the horror of this piece kicks in. Piled up, layer upon layer are these 'unfortunate' souls, unfortunate because they cannot die and now come back to haunt and stalk our mercenary band. There is excellent use of lighting and shadows as we see only brief glimpses of the movements of the undead; we know they are 'alive' we know our characters initially don't and this creates great tension by our own mind expanding on what might be to come. Like Blair Witch before it the horror comes from the viewers own imagination and not what the director has to dish out on a plate. Ultimately this is the best horror that anyone could ask for in my opinion, your own mind playing its own tricks on you. Fear not though, those who like their shocks and gore there is that too. Some brutal killings and more than a few 'he's behind you' moments as the creepies pop up in the most unexpected of places.

The score again reminded me of Carpenter's work, this time The Thing; not because of its haunting electronic tones but because it adds to the characters feelings throughout the film. It heightens the sense of tension and is a welcome addition to this feature, not in your face detracting to what's on screen, more adding to what you're seeing and that's always the sign of a great score. Shot in the bleak woods of Dumfries and Galloway (bleak, trust me I used to live there!) visually the film is muted somewhat, colours drained from the woods and our characters' costumes as the blood is drained from the zombies faces. Without a doubt though this is perfectly suited to the film, no bright colours distracting the viewer from the sombre mood created.

I was astonished again with the actors assembled here. On a low budget I wasn't expecting too much hoping the story would carry it through but Ray Stevenson (Rome, King Arthur, The Bill) is excellent as the commanding leader who slowly realises that this is not all he had bargained for and now needs to find a way out, quickly. Julian Wadham as Hunt plays his part well enough as the scientist whose own ambition forsakes everything and everyone else. The mercenaries are a diverse bunch including Richard Brake (Batman Begins) however most are culled from the UK television arena. Here they certainly make the jump to movies well enough with Michael Smiley and Brett Fancy coming across well as the increasingly disturbed Scotsman and battle hardened Russian respectively. Note to Brett though; work on your accent a little.

Outpost has been compared to another low budget early feature, Neil Marshall's excellent Dog Soldiers and there's definite parallels, a siege by unknown horrific forces but Outpost easily stands on it's own alongside Dog Soldiers and should be enjoyed for what it is on it's own merits. Yes it's derivative of a few films, Dog Soldiers being one of them, but it mashes themes together to produce its own form and that form is a more than enjoyable one.

So ultimately there's a film out there which in modern day terms has been made for buttons, estimate put Outpost at just over £1million, compared to the millions our US counterparts may spend on the current crop of torture horror yet they have eclipsed them all by producing something that is genuinely creepy, atmospheric, wonderfully paced and acted; and on this tight a budget it's a credit to the director, the production team and the actors. It's a joy to watch, like Dog Soldiers before it, a breath of fresh air in a genre populated with too much hack and slash. So for all you spook fans out there then I can whole-heartedly recommend you pop down to your local multi screen and feast your eyes on this. Here's looking forward to their next feature.