Out of Sight Movie Review 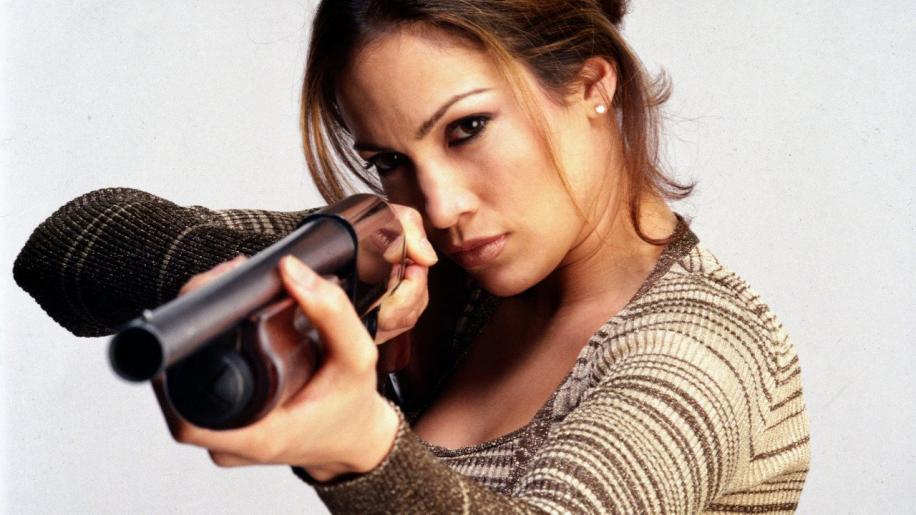 How would you define cool? Ok, let me narrow the question down – how would you define cool in the movies? Is it the scene from the Matrix where Neo fights Morpheus in the training dojo? The slo-mo walk from Reservoir Dogs? The oft-forgotten opening nightclub scene from Blade? The coffee-shop ‘showdown’ from Heat? Basically most anything with Steve McQueen or Benecio Del Toro in it? The list of cool scenes is endless, but the list of cool movies is somewhat narrower – with only a few standing out. On that list, however, are quite a few titles which have been adapted from Elmore Leonard novels. The now 85 year-old author is probably most famous for the likes of Get Shorty (the film that truly cemented John Travolta’s first comeback, post-Pulp Fiction) and Rum Punch (adapted into Jackie Brown); his ear for dialogue apparent in most every film adaptation and, most recently, in the Timothy Olyphant TV drama, Justified. And things simply don’t get much cooler – or sexier – than Steven Soderbergh’s 1998 film of Leonard’s novel, Out of Sight.

“Is this your first time being robbed? You’re doing great.”

After a tightly-packed ride in the boot of a prison break getaway vehicle, career bank robber Jack Foley and the woman he took hostage, US Federal Marshall Karen Sisco, hit it off. It’s not supposed to be that way, it’s complicated, and the both of them know it’s not going to end well – but the moment they share in the trunk of that car leaves them both yearning to find out ‘what if’. All the while they continue with their day jobs – Foley trying his best to stay out of jail and pull down ‘one final score’, and Sisco actually assisting in the manhunt for him and the others who broke out of prison – but they are both waiting, and hoping, to meet again; and maybe find out...what if?

Out of Sight was actually quite a landmark movie in terms of it marking the breakthrough for not only acclaimed director Steven Soderbergh but also (at least in part) that of a certain George Clooney. Clooney had proven his charisma in E.R. but needed to make his mark as a Hollywood contender, and so proceeded to churn out no less than 6 movies – as the leading man – in just 3 years. Of these, the only one I can truly complain about is Batman & Robin, and even that was probably just a side-effect of his scattershot attempt to secure a footing in Hollywood: taking in practically every genre, from romantic comedy to comic book adaptation; from war satire to action-thriller. From Dusk Till Dawn, The Peacemaker and Three Kings are all amongst my favourite Clooney films – made back when he had that youthful passion (which has since been replaced, to good effect, with veteran experience). Now Clooney makes either deadly serious movies (like the excellent Michael Clayton and the underrated The American) or outright comedies, with only the occasional movie in between – like the enjoyable Up in the Air. But back in 1998 he was still finding his footing, and so he teamed up with Steven Soderbergh for Out of Sight.

“If I see him wearing his sunglasses I’ll step on them. Might not even take ‘em off first.”

It was the first of no less than 6 collaborations – the most popular of which are probably the Oceans Trilogy – and it also included the intense Solaris. Soderbergh himself had lingered in indie obscurity for a decade after his debut Sex, Lies and Videotape, and it was Out of Sight that finally put him on the map as a serious contender. With it, he was able to show all of his indie talents – his stylistic flourishes and eccentricities – whilst also providing a thoroughly entertaining crime drama, itself bolstered by a fantastic Elmore Leonard script. Soderbergh blended non-linear narration with clever flashbacks, freeze-frame punctuation and specific colour coding for location to great effect. It’s the first of 5 movies by the man where a key phrase would surely be ‘effortlessly cool’ (I’m adding The Limey in with the ‘Oceans’ package) and it appeared never more natural than in bringing Leonard’s words to life through an eclectic bunch of great talents. I’m not just talking about Clooney here – and he wasn’t the only upcoming actor who would later become a serious Hollywood player (Don Cheadle) – with the likes of Ving ‘Pulp Fiction’ Rhames, Luis ‘Carlito’s Way’ Guzman, and Dennis ‘Manhunter’ Farina and contributing to the heady mix. And hell, Soderbergh and the script get surely the best performance out of Jennifer Lopez that we are ever likely to see.

“You wanted to tussle. We tussled.”

One of the best things about it is the way in which they almost all play against type. Clooney is tough as nails, but plagued by bad luck; suave and charming, but occasionally quite goofy – he may be a classic Leonard protagonist, but his bank robber Jack Foley is certainly not the perfectly-assured film noir character that you would perhaps have expected from the actor, and it’s a refreshing change. And to think that they nearly cast Sandra Bullock as Karen Sisco! Whilst these days it may seem as if Jennifer Lopez would be the more dubious choice, back in ’98 Lopez was taking some (more) adventurous roles and wasn’t yet known for just dire romcoms. Out of Sight really brought something out of her, however, and she perfectly embodies the cool, undeniably sexy and dominatingly assertive US Marshall Karen Sisco. I can totally see why they did a spin-off TV series based just on the character (who was arguably the focal point of the novel), but Carla ‘Sin City’ Cugino’s portrayal of Sisco in said ill-fated crime drama was evidence of how casting – and perhaps script – are everything. Lopez was perfect as Sisco. Of course it helps no end that both Clooney and Lopez had great chemistry. Apparently Clooney displayed good vibes with Sandra Bullock as well, but Soderbergh thought it was not appropriate for this kind of film – and I totally agree, Clooney and Lopez ooze sex appeal and magnetism, working effortlessly together – and becoming one of the best on-screen couples that I have ever seen.

“It’s like seeing someone for the first time, maybe passing on the street. And you look at each other for a few seconds, and there’s this kind of a – a recognition... you both know something. The next moment the person’s gone and... and it’s too late to do anything about it; and you always remember it because it was there and you let it go and you think to yourself ‘What if I had stopped? What if I had said something... What if? What if?’ It may only happen a few times in your life. Or once.”

Dennis Farina is also superb as Sisco’s dad, an integral accompaniment for Karen’s character. Farina’s been in a whole bunch of stuff, from playing William Petersen’s partner in the underrated Manhunter to popping up as a mafia boss in Snatch (as well as appearing in the other big Elmore Leonard adaptation, Get Shorty), but he generally plays it straight – often as a criminal – which is what makes his performance here so rewarding. Here he’s the perfect dad to a US Marshall, and it’s a shame his background isn’t developed enough (he’s an ex-cop turned private detective) but what we do have from him – largely witty scenes which show how cool but protective he is towards his daughter – is fantastic. Arguably one of the best father-daughter relationships ever committed to film, it was paid tribute to somewhat in the recent comic-book adaptation Kick-Ass.

Don Cheadle? The man can do no wrong. Whether replacing Terrence Howard for Iron Man 2, playing an honorable cop in Crash, an undercover cop in Brooklyn's Finest, or backing up Denzel Washington in The Devil in the Blue Dress, Cheadle is an undisputable presence. His intensity is evident in every film, often portraying individuals that are not to be messed with. Here, his fellow inmate Snoop has some great lines, and knows how to intimidate, but is given a nice edge when facing off against Foley and Buddy, who see him for what he really is – an amoral bully. Even Ving Rhames, perhaps most famous for being Marcellus Wallus, has a softer side to his tough edge here, his character plagued with a guilt that requires a confession to his sister after every crime committed. Rounding out the eclectic cast, Luis Guzman brings in a bit of camp hilarity as the Hispanic escapee Chino; Isaiah Washington is scarily oppressive as Snoop’s serial-rapist friend; Being John Malkovich's Catherine Keener is almost unrecognisable in bright pink leggings as Foley’s colourful ex-wife; and Steve Zahn is a great point-of-humour as the goofy, perpetually stoned Glenn, who always gets in over his head; and we also get great cameos from Michael Keaton (playing the same character that crosses over into Jackie Brown) and Samuel L. Jackson (on suitably prophetic form – perhaps the only part that could be considered typecasting, but still works fantastically).

“You broke out?”
“I prefer to think of it as an exodus from an undesirable place.”

All the ingredients are here in this exceptional production – it’s part crime drama, part caper, part comedy, and part romance – all effortlessly blended together to provide exceptional results. And aside from the great script, superior direction and amazing ensemble cast, Soderbergh rounded out the proceedings with what proved to be a last-minute but nonetheless integral accompaniment: the score. Initially he’d planned on having far less music, and indeed only one track by composer and DJ, David Holmes; but both of these changed for the better, and Holmes went on to compiled one of the coolest, funkiest film scores of all time – a modern DJ Shadow / Adam F-style update on 70s beats as pioneered by Lalo Schiffrin (Dirty Harry). It works perfectly with the production, richly enhancing every single scene (watch the Deleted Scenes to see how some of these sequences would have played with no score) and raising the coolness quotient no end.

Out of Sight was truly a game-changer for many of those who were involved, and will likely be remembered for its ever quotable, sardonic dialogue; great performances; stylish direction and funky soundtrack. It’s not a heavyweight vehicle, but it is surprisingly dramatic; it’s not an outright romance, but it simmers with palpable chemistry; it’s not a comedy, but it’ll have you in stitches. And beyond all of this it is one of the top contenders for the coolest movie of all time. Highly recommended.

“Take your sunglasses off!”
“I see better with ‘em on, man.”
“You don’t take ‘em off, I’m gonna’ throw them off the overpass while they’re still on your head.”