No such thing as a KODI Box? Arguably this is the KODI Box. 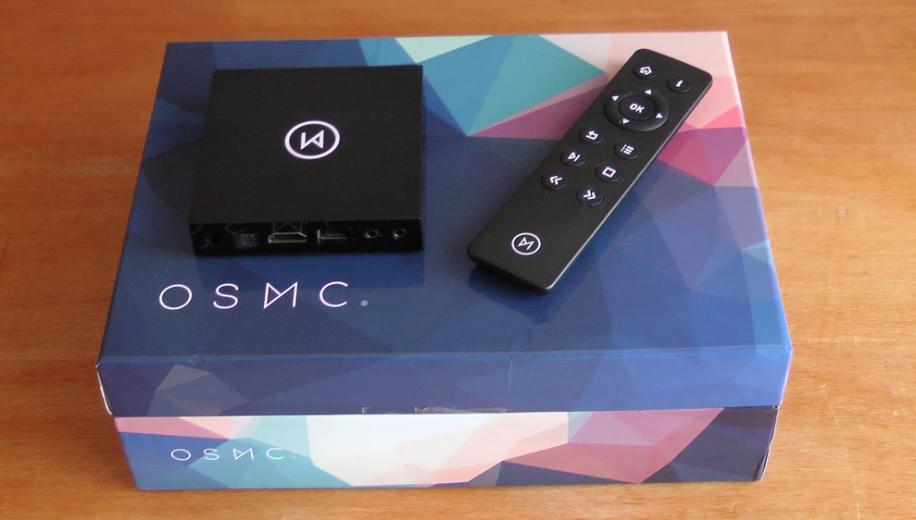 What is the OSMC Vero 4K?

Before we get in to the nuts and bolts concerning the device, itself, we’re probably better served by explaining how it came about and which operating system it runs on as the two are inextricably linked. The Vero 4K is a purpose built streamer running on OSMC (Open Source Media Center) which is a free and open source media player using Linux and based on KODI. The chief architect of OSMC was previously responsible for the extremely popular distribution of Raspbmc, on the Raspberry Pi, which was also based on KODI (then XBMC) and Linux. The Vero 4K came about as a purpose designed device for OSMC and was intended by its developers to get the best possible performance from it. At the time of writing (September 2017), the Vero 4K is priced at £119 which is competitive with the best supported and performing ‘little black boxes’ on the market and we have high hopes for it, so let’s see if it’s able to live up to them.

The Vero 4K is super small, as in palm-of-the-hand size and is fairly non-descript other than there being the OSMC logo, top-centre, and a blue/red cross power indicator on the front-centre. Connections are located to the left side and at the rear. On the side are a Micro SD card slot and two USB ports while rearwards facing are a Toslink digital audio output, HDMI 2.0 port, a ‘Fast’ (100Mbps) Ethernet Port and two 3.5mm jacks; the one closest to the Ethernet port is a CVBS port, which can do 480/576 video output with two channels audio so, in all likelihood, you would use it as a stereo jack as you’re probably not interested in SD video (we hope). The second 3.5mm port is for the included IR (infra-red) extender, if you want to use a universal remote, such as a Logitech Harmony and place the receiver behind the TV or in an AV cabinet. . The Vero 4K also comes with a mounting plate that sticks on to the back of your TV (or wherever you like) with an adhesive strip. This IR extender isn’t necessary if you are not putting the device out of line of sight, or if you're using the included RF based remote and dongle. The remote is among the very best we’ve used with such a device with its rubberised buttons providing a very satisfying amount of ‘clicky’ feedback. There’s the usual array of buttons – including directional and enter keys, transport controls, a home button and information key and, wait for it, an actual Stop button which, believe it or not is very rare in the media player market where the Back button tends to be used in its place. The Vero 4K provides an easy to follow setup wizard on first boot where you’ll go through the usual language and location choices and choose whether to enable the SSH (Secure Shell) network protocol or not (it makes remote administration of the device possible so we’d advise it). You can then opt between two default skin (user interface) options, with choices of the OSMC or Classic (Estuary) KODI and, finally, sign up – or not – to the monthly OSMC newsletter. Personally, I’m not a big fan of either Estuary or the OSMC skins but you have the ability to load all the available KODI Krypton (V17.x) compatible skins anyhow, so you have all the usual freedom of choice we love about KODI. You then go about adding your sources in the usual fashion whereupon you can then scan them in to your library with images and metadata. All-in-all, it’s a pretty pain-free process that can be achieved in around 5-10 minutes, depending on how large your library is. There are a number of features built-in to OSMC, and therefore the Vero 4K, that sets it apart from regular KODI. OSMC has its very own ‘App Store’ including a dedicated TV Headend Server, a Transmission Torrent Client and both FTP and SMB Server software options. OSMC also comes with built in support for a variety of popular infra-red remote controls, an easy to access log uploader, in case of issues, and the software also receives monthly updates, like clockwork, which is a feature very much not to be underestimated; the Vero 4K has been promised to be supported for 5 years from release which is much, much better than most, if not all, of the competition.

Going forwards, there are plans afoot to introduce Android support as a dual-boot option from an SD Card – OSMC will stay on the internal memory, which is the reverse of how it usually works in OpenELEC/LibreELEC set-ups. It will still be recommended to use OSMC as the media playback option, of course, but Android certainly has its own benefits and it’s always good to have options!

Right off the bat, let’s just say that the Vero 4K is as good as anything out there and in most cases superior, other than when it comes to the playback of 3D video and that’s being worked on as we type. One of our favourite differentiators, especially from the crowd of Android players, is the ability of the Vero 4K not just to switch video output refresh rate to complement the framerate of the content – which it does very ably – but also to switch the actual resolution between 1080p and Ultra HD, where necessary. Most media players force the user to select resolution in the system settings which can be a royal pain. It’s far better in almost every case to ask your 4K TV to scale sub UHD resolutions than it is to rely on the scaling of the device which is invariably inferior. Moreover, we couldn’t find a sensibly encoded 4K file the Vero was unable to play.

Although our current test TV is not a true HDR set, it will accept HDR signals and go in to a Faux HDR mode and we're happy to report the Vero 4K was able to detect and play every HDR 10 file we had for testing. It even played the Dolby Vision clips, albeit in SDR, but that's better than most players can manage.

Considering some of the issues we’ve seen with some AMLogic S905 based devices, it would almost be more logical to expect that the Vero 4K would have more issues with sub 4K content but this didn’t prove to be the case.

In fact, the Vero proved superb with almost every file type and resolution, regardless of whether it was progressively captured or interlaced. The latter is good news for those that like to integrate Live TV in to their media set-ups but we have read of use instances where 25p content is displayed sub-optimally on Ultra HD displays where, seemingly, there's an issue with KODI sending the content at 50Hz and stutter; it shouldn't be a problem but it is something we've seen with other devices and can generally be worked around by setting display output at 4k25Hz or adjusting AdvancedSettings.xml to something like:

...it's not something we saw on our test displays, however.

The lack of a Gigabit Ethernet port was always going to prove a stumbling block for some of the following tests but a lot of this (maybe most) is theoretical, in all honesty, especially considering the maximum bitrate for Ultra HD Blu-ray is 128Mbps and that’s assuming it will ever be cracked for ripping.

As we mentioned at the top of this section, the Vero 4K isn’t currently the best option for 3D video enthusiasts. Side-by-Side files are well catered for and should, in most cases, automatically engage your TV in to its 3D mode – assuming it has one – but support for frame packed ISO and MKV is currently limited to 2D playback, although you can ‘hack’ a frame-packed output but we didn’t find it reliable. The previous Vero (2) did support frame packed 3D but it was broken by KODI 17 but the developer(s) is hoping to add back support in the next (September 2017) update, which would be great news indeed

When it came to support for various audio types, the Vero 4K was certainly not found wanting.
The Vero 4K has absolutely no problems with the HD audio formats in up to 7.1 channels, including DTS HD-Master Audio and Dolby Digital TrueHD, plus there’s also support for object based audio in the shape of DTS:X and Dolby Atmos. The Vero can also handle PCM up to 192Khz/24-bit and, as you would expect, ‘regular’ DTS and Dolby Digital presents no difficulties either.

The Vero 4K is an extremely compact, purpose-built media streamer that has an awful lot going for it and, given the almost unparalleled support it receives, it’s a safe bet that it will only get better with age. The design is nothing special – it’s a little black box with only a couple of notable touches – but it’s well made and features pretty much all the connectivity options you will ever need. Those include an HDMI 2.0 port, S/PDiF (Toslink) digital audio out, a couple of USB ports and up to 802.11ac Wi-Fi and Bluetooth 4.0 capability. About the only negative is the lack of Gigabit Ethernet, instead of which there’s a 100Mbps port but you could reasonably argue the case that it’s not really a problem. Far more impressive than the Vero 4K box, itself, is the supplied remote which is a super little controller, operating over RF with highly satisfying ‘click-ability’ and the unusual, but welcome, inclusion of an actual Stop button; the only way it could conceivably be improved would be the addition of a backlight for late night operations.

The Vero 4K runs on OSMC (Open Source Media Center) which, like the device itself, is a something entirely built for purpose; in this case that objective is to run KODI, the world’s favourite (and we would say best) open source media centre software. The result of this marriage of custom hardware and software is that the Vero 4K runs super smooth (and fast) and comes with very few limitations. There’s effortless playback of HEVC Ultra HD content, up to 60 frames per second, including HDR 10 (High Dynamic Range) content. The Vero 4K also possesses a rare, and extremely useful, ability to automatically switch video output between Ultra HD and Full HD resolutions, leaving the scaling to your display, rather than the chipset, which is always the better option; it will also dynamically adjust the video refresh rate to complement the frame-rate of the content which, while not so unusual, is equally welcome. There’s also support for High-res (192Khz/24-bit), HD surround and object based audio, including Dolby Atmos and DTS:X audio. In fact, the only thing really lacking, for the time being at least, is playback of frame-packed 3D video but that’s being worked on right now and should hopefully follow in an imminent software update. We’ll update the review when that happens and it may even affect the overall rating which is already standing at an AVForums Highly Recommended status; if the developers can properly nail frame-packed 3D output then the Vero 4k would be the Reference KODI device, if it isn't already.