The ultimate in tidy audio solutions? 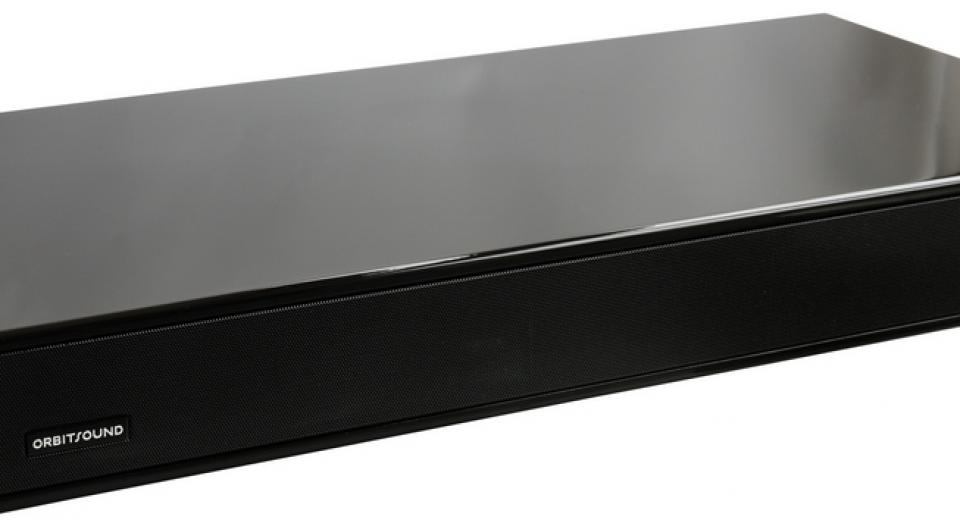 The soundbar market has blossomed these last 24 months as consumers have flocked to their combination of convenience, simplicity and TV audio enhancement. The trouble with selling true multi-channel audio systems has always been that they aren’t easy to accommodate tidily in the living room and soundbars at least partially address this issue; but what if even a single speaker and subwoofer solution upsets your (or your other half’s) design sensibilities? Step forward Orbitsound’s SB60 airSOUND Base, which packs it all neatly in to one package that simply sits beneath the TV. Surely nobody would object to something so unobtrusive but how does it perform. Time to touch (sound) base.

The SB60 doesn’t really need to look particularly good considering it’s destined to spend most of its working life partially hidden below the base-stand of your TV but it features an attractive piano black polished finish, nevertheless. In typical Orbitsound fashion, the unit also feels well-engineered and robustly packaged so you needn’t worry about it caving in under the weight of your TV. The manufacturers state that it’s designed to support TVs in the 32- to 42-inch range but we’ve had a 60-inch Samsung F7000 sat atop the sample for a couple of weeks in rock solid fashion so they’re being a little coy there. Of course, the modern trend for TVs is to sit them on designer stands so it’s not going to fit everything but it’s generally only the latest flagship models that have broken the rectangular mould. For completeness, the units’ dimensions are 60cm x 30cm x 8cm (width x depth x height) so it’s worth checking if your base will fit on. To coordinate with the finish of your TV, Oribitsound has included a choice of black or silver speaker grilles so most bases (how many times is that word in the review?) should be covered.

For better or worse, connectivity options aboard the Orbitsound SB60 airSOUND Base can be described as extremely simple as there’s only an S/PDIF digital optical in, a pair of RCA stereo inputs and a 3.5mm analogue audio jack to the rear. Also on the back are a volume dial and an On/Off switch but the exclusion of Bluetooth compatibility, out-of-the-box, is a bit of a mystery to us. Oribitsound’s ‘traditional’ soundbar packages can stream audio wirelessly from phones and tablets so we don’t see why the SB60 won’t – it’s not that radically different a product and we’d expect the airSOUND bases’ target market would appreciate its inclusion. Orbitsound says there is a (paid for) external solution but full details of that have yet to be revealed.

The airSOUND Base ships with a slightly-larger-than credit card style remote control which is OK but nothing special. Like the engineering of the main unit, it feels solid and fairly weighty for something so relatively compact and is also cast of shiny black material. It has adjustments for Volume, Treble and Bass as well as a Mute button, Source selection and power. Something to note is that the audio controls are quite coarse, so if you have it down low for late night listening, beware that 3 or 4 quick clicks up on the volume can result in peace-breaking levels of output. We’d also like it if the labelling on the buttons was easier to read in low light conditions, or even better if there was a backlight, but since there’s relatively few buttons that's not a huge limitation. Under the speaker grille there is a small indicator light which glows red when in standby and blue when the device is powered on but there’s no way of telling which source you’re connected through, other than by scrolling through the inputs until you hear something. Since there’s only 3 sources available, by default, that’s not a huge issue but some further means of feedback might be nice. Note: You might want to check your TVs menu if you’re not hearing anything from the optical input as some require enabling their outputs by the user but, other than that, the SB60 is perhaps as simple as gets in terms of its operability.

What we suspect most of you are wondering is, just how does the SB60 airSOUND base get on without a dedicated subwoofer unit? It should be easy enough for Oribitsound’s engineers to secrete the smaller drivers, necessary for the mid and high frequencies, in to the recesses of the SB60 but squeezing in a 5-inch subwoofer doesn’t seem such an easy task. We think it would be fair to say that, based on our experience to date, almost every soundbar package that comes with a separate sub will undoubtedly outdo the efforts of the SB60, in terms of volume and depth. However it is very agile and packs enough punch to show your TV's speakers a clean pair of heels.

It’s certainly on the polite side of the fence and isn’t going to satisfy those with tastes for something really low but its pleasing enough, nonetheless, and rarely puts a restrained foot wrong. The nature of the technology might mean you’ll get some undue vibration depending on the surface of your rack but provided we didn’t puch the Bass control too hard, it was fine on our wooden cabinet. Despite the exclusion of Bluetooth, we still expect many will utilise the SB60 for music playback and it’s inherently warm sound lends itself well to that discipline. In fact, during its stay at AVForums towers, it was in fact used for that very purpose – back-to-back against a soundbar system with a dedicated sub – and the SB60 acquitted itself very well indeed, pleasing guests and hosts alike with the wide variety of party schlock thrown its way.

But there’s no doubt the airSOUND base’s main use will be as the purveyor of audio for whatever display it’s connected to so it’s the performance here that is really key. As well as the down-firing 5-inch sub, the SB60 employs 4 two-inch drivers – two at the front and centre and one firing from each side – which are tuned to give a sense of breadth and designed to eliminate the sweet-spot. We’d say the SB60 was certainly successful in the first regard, with movie & TV soundtracks, alike, given a welcome sense of space and some surround but the sweet spot doesn’t really extend much beyond the centre of the unit. In a typical living room environment, however, the SB60 will sound excellent, wherever you’re sat. Once again, it’s only really the lack of totally convincing bass notes that lets the side down.

The airSOUND Base SB60 is a very nicely crafted bit of kit; from the durable, piano black finish to the well-engineered feeling of the box, which is reassuringly weighty. Connectivity options are sparse, however, and we’d like to see the inclusion of Bluetooth, as standard, as well as at least one more digital audio input. This does make set up and operation of the SB60 suitably straightforward however, although some visual indication as to which source you’re currently listening to would be appreciated. The design of the SB60 is supposed to be capable of holding a TV with screen size of up to 55-inches but we found you could sometimes stretch it a little more provided, of course, the stand will fit; your 2012/2013 flagship TV with its fancy schmancy designer stand may not be a candidate.
So how does the one box solution work outside of the design aspect? Very creditably, in fact, delivering clean, tight and crisp audio that belies the dimensions of the box. Orbitsound have imbued the SB60 with a naturally warm tone which lends itself almost equally well to movies, TV and music, although the lack of substance to the bass is perhaps most keenly felt with musical duties. The spatial sense from the airSOUND technology is actually rather satisfying and packs some depth that thinner soundbars struggle with. However based on our reviews to date, the SB60 can't match a soundbar package with a dedicated sub when it comes to delivering gut thumping low frequencies. In all fairness though, it will still comfortably outperform your flat panel TV's rather weedy output by some margin.
At just under £300, the airSOUND Base is pitting itself against some very good performers in the soundbar market but it’s certainly a more powerful performer than one might expect and the one-box solution is bound to find favour with the aesthetes out there.