Super-sized home entertainment for those on a budget 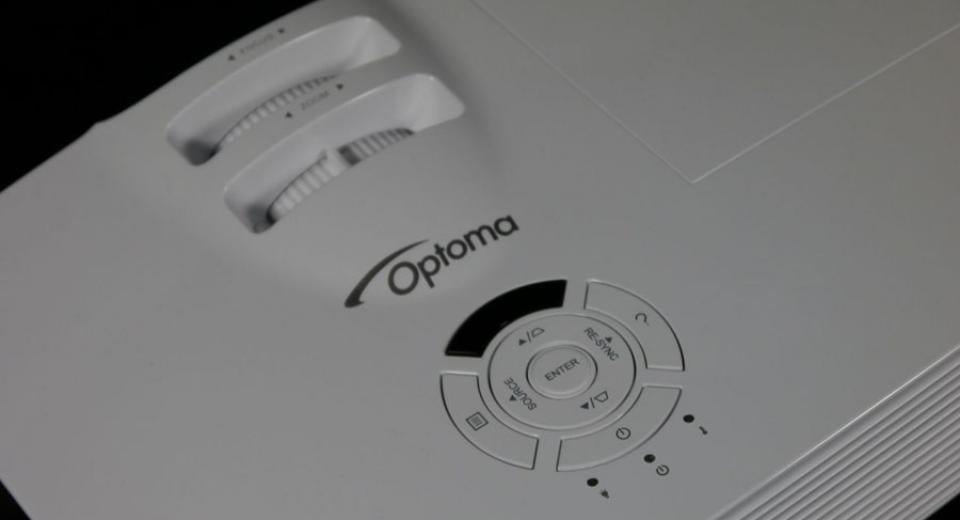 The HD26 is the latest budget Full HD projector from Optoma and retails for £549 (September 2014). It uses a single chip DLP design with a four segment colour wheel and UHP bulb. It is rated at 3200 ANSI lumens and has a claimed contrast ratio of 25,000:1. There is an integrated speaker and the HD26 includes support for 3D and MHL, along with Optoma’s Dynamic Black feature.

Who is it aimed at?

The HD26 is clearly aimed at the budget end of the projector market and as such it is not intended for dedicated installations. The higher brightness of the bulb means that the HD26 is better suited for average living rooms, where there will be lightly coloured walls and a degree of ambient light. The HD26 is designed to provide big screen home entertainment at a reasonable cost and thus would be ideal for anyone looking to watch films and TV or play games on a big screen, whilst still using the room for other purposes.

The build quality is reasonable for the price.

The HD26 uses an all-white plastic chassis and whilst the build quality isn’t great, it’s certainly adequate for this price point. There is a small plastic lens that is position just off centre and above the lens there are controls for zoom and focus. Also on the top is a set of basic controls, which might be handy if you ever misplace the remote. There are air vents at the front, sides and rear and the integrated speaker is also situated towards the rear. How do I connect it up?


Unusually the connections are on the right hand side and are orientated vertically rather than horizontally. Aside from this strange orientation, the other point to note is that the HD26 has no legacy inputs, so it only accepts HDMI. There are two HDMI inputs, one of which supports MHL but otherwise that’s your lot. The only other connections are a USB port and a 3.5mm analogue audio output, along with a 3D emitter connector and a 12v trigger. The HD26 is very easy to set up, you just connect your sources to the HDMI inputs and position the projector in front of the screen. The Optoma can create a fairly large screen size so as long as you position it carefully you shouldn’t have any trouble zooming the image to fit your screen and focussing it with the manual controls.

It’s important that you position the HD26 correctly because it doesn’t have a lens shift and you want to avoid using keystone correction if at all possible. Then you just enter the menu and select the appropriate picture mode and make sure any unnecessary features are turned off. You can do this by either using the controls on top of the projector itself or with the provided remote control.

The connections are in an unusual position but at least there are two HDMI inputs.

How do I control it? The HD26 comes with one of Optoma’s standard remote controls, which is small but comfortable to hold. On the whole the buttons are sensibility placed, although the menu button is in a strange place and can be hard to find in the dark. There’s also a backlight which might be helpful, although it's unlikely the HD26 will be used in a completely dark room. So overall the remote control is perfectly adequate and, as mentioned previously, there are controls on the top of the projector should you misplace it.

What features does it have?

The HD26 is hardly feature packed but you wouldn’t really expect that considering the price point. However it does include a few features that some might find useful. The HD26 betrays its lower budget, data grade origins with an integrated speaker. We suspect anyone looking for big screen home entertainment will use a proper audio solution but the internal speaker might come in handy where sound quality isn’t important.

The HD26 also supports 3D, although it doesn’t come with any glasses, so you’ll need to buy those separately. One of the HDMI inputs on the HD26 supports MHL (Mobile High-definition Link) which means you can project photos and videos from your compatible smart device. Finally the HD26 includes Optoma’s Dynamic Black feature which adjusts the brightness of the bulb, depending upon the scene - more on this later.

We experimented with a number of the presets and found that the best Display Mode to select out-of-the-box was Reference, which delivered the performance shown below. The greyscale performance wasn't perfect but it wasn't bad for an out-of-the-box setting, although there was an excess of red energy and a defect of green.

However the gamma was better, tracking close to our target curve of 2.2. The colour performance was somewhat disappointing, especially when compared to previous Optoma projectors that we have reviewed. There were sizeable errors in the saturation of all the colours, with blue, green and magenta being especially under-saturated.

The white balance control on the HD26 is very basic, essentially just moving red, green and blue across the entire scale but luckily the errors were consistent from 20 to 100IRE, so we were able to make a significant improvement in greyscale accuracy. There were equal amounts of red, green and blue and the overall errors were all below the visible threshold of three. Unfortunately using the white balance control did affect the gamma, introducing clipping at 90IRE.

The colour performance was poor with a very under-saturated image.

The HD26 has been designed for a specific purpose and in that sense it performs quite well. It's bright, even after correctly setting it up, so it will deliver the goods in a room with light coloured walls. The increased brightness also means that it can compete with any ambient light, so if you intend to use it during the day or with lights on, the image should still be very watchable. This makes the HD26 good for anyone planning to use the projector for occasional movie nights, to play games or to watch sporting events. The Optoma HD26 is intended as a reasonably priced first-time projector and in that sense it succeeds.

The HD26 also provides other benefits and, as we would expect from a DLP projector the motion handling was excellent with no smearing on fast moving objects. This will make it ideal for fast-paced sports action or gaming and the low latency also made for a more responsive experience. The HD26 also handled 24p content well, so Blu-rays will look impressive and thanks to the single chip design, images will be pin sharp and detailed. The video processing was also very good and the HD26 will have no problems with standard and high definition interlaced images. The HD26 also supports 3D and anyone who has experienced the format on a DLP projector will know that the technology works particularly well with active shutter 3D.

Optoma HD26 What’s not so good?

The HD26 isn't perfect of course and there are a number of issues that need to be addressed. The first is the under-saturated colour gamut shown in the technical section. This under-saturation was obvious when watching actual content and demo discs where we would expect to see a vibrant green appeared decidedly muted. However it isn't necessarily going to spoil your viewing experience and we would rather a muted colour palate than an over-blown one.

The next issue is that since this is a DLP projector, the blacks levels are fairly mediocre. The combination of the technology and the bright bulb do rob the HD26 of contrast ratio and dynamic range. As a result blacks look more like a dark grey and even resorting to the Dynamic Black feature didn't help. In fact the blacks really didn't look any different but the fluctuations in brightness did become annoying as the power to the bulb was adjusted. However given that the HD26 will probably be used in rooms with light coloured walls or ambient light, the black levels are less of an issue.

Since the HD26 uses a colour wheel, those that are susceptible to rainbow artefacts will undoubtedly suffer and the projector is quite noisy once you combine the fans and the colour wheel; however this is fairly standard for a single-chip DLP projector. The bright bulb is useful but there was a degree of light spill coming from the various vents around the chassis but if you're not using the projector in a pitch black room, this shouldn't be a problem.
The HD26 isn't perfect but it's bright and cheap, making it a decent first-time projector.

The HD26 is aimed at a specific part of the market and in that sense it succeeds in its purpose. The projector is small, light and easy to set up, whilst its brightness makes it ideal for rooms with light coloured walls or ambient light. The overall performance was good and the HD26 would be ideal for anyone looking to try big screen entertainment for the first time. The inherent strengths of DLP make the HD26 great for sports, gaming and 3D; whilst its price will make it very attractive to those on a limited budget.

There are issues with the HD26 but most can be mitigated to some degree. Of course since it's a single-chip DLP projector with a colour wheel, those that are susceptible to rainbow artefacts should be careful. The combination of fans and colour wheel also result in some noise, whilst the bright bulb and air vents create a degree of light spill. This probably won't be that noticeable in a room with ambient light and the same is true of the mediocre blacks; whilst the muted colours are preferable to over-saturated ones.

This area of the projector market is very competitive, with a large number of models being available for similar prices. Almost all of these are DLP projectors, so a lot of the same issues apply but certainly in the case of BenQ's W1070, the colour accuracy is considerably better for a similar price. Alternatively if you suffer from rainbows, you could take a look at Epson's TW5200, which offers many of the same features at a slightly higher price.