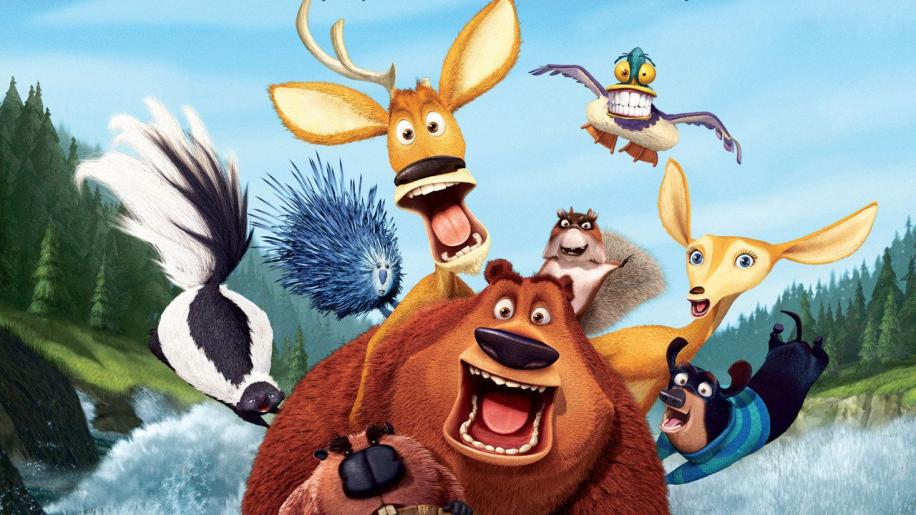 Open Season is yet another CGI animated movie, but with the added detraction of possibly the single most irritating duo in Hollywood history. It's bad enough having to subject one's self to Black Knight or Bad Boys 2, with Martin Lawrence, but to add Ashton Kutcher in the mix, of whom only The Butterfly Effect was worth watching (and not just due to Amy Smart either), and you can see where I'm coming from already.

The story is simple. Boog (Lawrence) is a bear that is somewhat domesticated. He's peaceful, loving and caring and puts on shows for the village where he resides. Enter Elliot (Kutcher), the deer who Boog frees after being hunted and tied to the front of Shaw, the hunter and main villain's car. Elliot feels that as Boog freed him, there's a connection and this is when chaos ensues. Firstly, Elliot manages to get Boog on a sugar rush, at which point they wreck the local quick stop. After being reprimanded, Boog recognizes Elliot to be trouble and wants him gone, but due to a severe misunderstanding, the town folk think that Boog has gone from good natured to “normal” and both Boog and Elliot are tranquilized, lifted and dumped back into the wilderness. Boog then decides that he HAS to get home even though Open Season is 3 days away and they're going to be “fair game”.

So it ticks all the cliché boxes. It has annoying side kick, typical buddy movie-isms,the realization that the irritating buddy is actually alright after all and the typical Hollywood schmaltzy ending. It even features lots of famous names as the voices, such as Gary Sinise, Billy Connolly and Debra Messing. So what went wrong?

Well, for starters, the formula is tiring. Heck it was old when Lethal Weapon did the buddy movie, it's really tiring now! It also features - and I don't think ANYONE can defend this - two of, if not the most, annoying actors working in Hollywood today. They're not funny. They're not even amusing. They are plain and simple awful. I wish studio execs wouldn't waste any more time and especially money on hiring them - it's a surefire way to kill a movie dead.

But even if we take that out of the equation, the movie is just Shrek, Madagascar or any other animated CGI buddy movie that we've seen over the last few years. The villain, Shaw, isn't even remotely a threat - he's too dense to be a threat and is only in the movie sporadically. What's the point in having a villain if you never, at any point, remotely feel that the “heroes” are in any form of danger? Exactly. This is movie 101 on how not to make a movie for children - as they really are harsher critics than I am. From a lover of movies, I'd give this a miss.