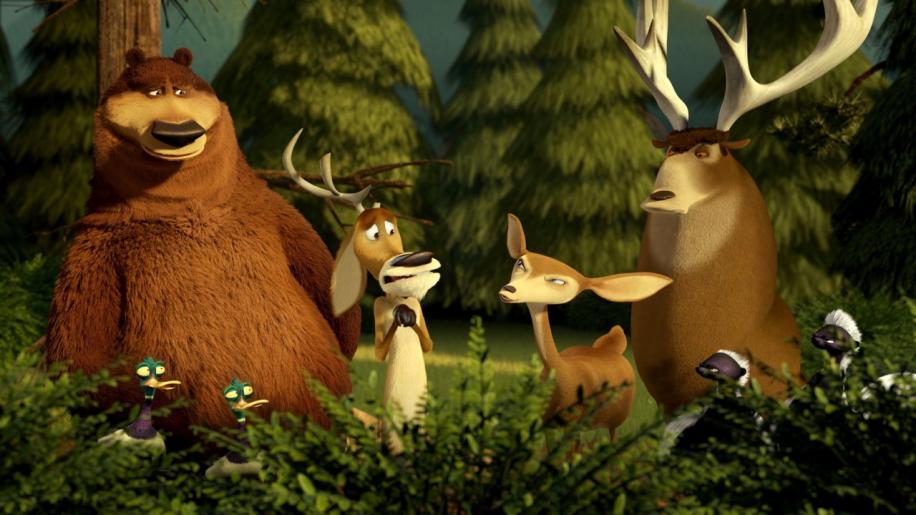 I began watching 'Open Season 2' with no pre-conceptions, as somehow I had missed the first movie. This gave me the chance to view it on its own merits, although the term 'straight to video' gave me a sense of foreboding and set my expectations on the low side.
The animation is very stylised and on the minimalist side, perhaps reflecting budgetary constraints but the use of strong primary colours make it cheerful to watch in High Definition.

We find the 'hero' male deer, Elliot (voiced by Joel McHale), having jitters prior to his wedding to the love of his life, Giselle (Jane Krakowski). In need of reassurance, he turns to his friends including one Boog the bear (Mike Epps). What follows is a sequence of 'rack' jokes - in reference to the size of his antlers - so you'll gather that there's some attempt to provide humour for adults in this kiddie oriented movie. This along with various 'wiener' gags is probably responsible for it being given a PG certificate for rude humour.
Now, the humour's not all adult in nature. Indeed there is a whole slew of 'pooping' gags to gladden the hearts of pre-teens, the world over. Who says Sony Animation doesn't know their audience?

So, the plot continues when Elliot, in desperate need of an excuse to get out of the wedding, notices that Mr Weenie (Cody Cameron) the wiener dog - that's a Dachshund in civilised countries - has been dog napped by his original owner. Now, pay attention at the back. You see, he's been living in the wild with his wild animal pals since the last movie and his loving human owners now want him back.

Has anyone outside of the USA recognised any of the voice artists yet?
Oh, it's not just me then. Half the fun of an animation is recognizing the famous voices. Here's one for you. Billy Connolly!
Thank God for Billy Connolly as the voice (and personality) of the irate squirrel McSquizzy - who should have been given a free hand to write his own script.

Anyway, Elliot and his buddies track down Mr Weenie to Pet Paradiso, a retreat for domestic animals, where he's being retrained for petdom by Fifi (Crispin Glover), the French poodle - a nasty piece of work.
It's around about now that we're introduced to the coolest, funniest character in the whole movie. Roger (Sean Mullen) is a pretty dopey, skinny cat with two different coloured eyes who talks with a lisp. He's several beats behind everyone else and the suspicion is that he's survived a road accident at some point in the past. My audience instantly warmed to him and it's just a shame he's not a more central character.

So, the wild animals dress up in various disguises including a deer as a Dalmatian and a bear as an Old English sheepdog to get past the guard so they can infiltrate Pet Paradiso.
There's then a lot of running around as well as screaming and shouting before Mr Weenie is set free. Elliot and Giselle then take part in a deliberately out of tune version of the old Carpenters' hit 'Close to You' before settling down to wedded bliss.
There are no original songs in this movie, which would probably have raised the game a bit.

There were several 'laugh out loud' moments like the sequence where Fifi, the poodle, gets the Winnebago to stop by throwing up so that her companion, Roberto, can be allowed out to relieve himself. Anyone who's taken a dog on a long car journey can relate to this. It's good advice not to be eating anything at this point in the film.


Parents of young children will love this movie as it should afford them 76 minutes of respite. There's plenty to keep the kids (young and old) amused as it's a very colourful, noisy affair with more than a smattering of toilet gags.
Oh, to be young again!