You are in a dark cinema. You are likely to be eaten by a grue. 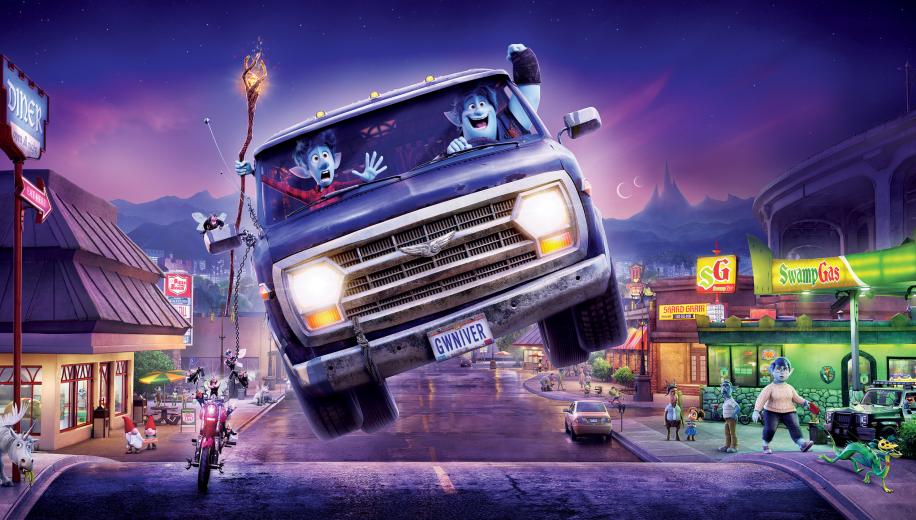 Pixar rolls for initiative and scores high but Onward is a film not entirely in a class of its own.

Pixar is one of Hollywood’s most reliable studios. Even when pumping out franchise sequels they consistently demonstrate emotional depth in their subject matter and over the last twenty-five years they have built an unmatched record of quality on the core principle that their films are for families, in the most literal sense. Not simply films for kids with pop-culture references (although these are not absent), not flooded with innuendo and knowing nods to adults among a sea of frenetic activity, their strongest creations are those that inspire some sort of insight into familial relationships. Mothers (Brave), fathers (Finding Nemo), growing up (Inside Out), growing old (Up), losing people (Coco) falling in love (Wall-E), or a mixture of the above (The Incredibles): films that demonstrate some sort of universal truth accessible to everyone. Onward is no exception, a film about male familial roles – specifically brotherhood – which also finds a little time to explore the experience of widowed motherhood.

Onward is essentially a road movie, complete with the usual successes and pitfalls of the genre

Onward looks like a film about a land which has lost its magic, but more accurately, it’s a film about its current inhabitants having never felt magic in the first place. Ian Lightfoot (voiced by current Spider-Man, Tom Holland), never knew his father, and his brother, Barley (Guardians of the Galaxy’s Chris Pratt) only has three memories from before their dad’s untimely death. As a 16th birthday present, Ian’s mother (Julia Louis-Dreyfus - Veep) passes on a magic staff with the power to bring their father back for 24 hours. But Ian doesn’t know if he really believes in magic and certainly doesn’t believe in himself, and his half-hearted attempt at the staff’s spell leaves the boys with only half a father.
﻿

﻿Good friends of both Disney and of each other, if their Twitter presence is anything to go by, Tom Holland (+1 chance to cast ‘web’) and Chris Pratt (+2 to rolls against mouserats) have a natural fraternal chemistry. The likeable pair play to their strengths with a buttoned-up anxiety (Holland) and metal-head enthusiasm (Pratt) that is a variation on a theme for the types of characters they’ve become famous for playing well. Onward is essentially a road movie, complete with the usual successes and pitfalls of the genre, and as with all road movies, it’s this hand-in-glove fit for the boys’ characters that propels the film, even through a dip or two. Some of the diversions provide opportunities for character growth, others feel a bit meandering or inessential beyond  an excuse for some jokes with an entertainingly nerdy bent. For those less familiar with the fantasy references, the fun odyssey itself is more than enough to charm.

Their mother’s own quest, to be reunited with her boys, works an entertaining counterpoint and her encounter with a manticore played by Octavia Spencer (Hidden Figures) who has lost her confidence and her ability to fly gives the film a nice back and forth rhythm that, while underdeveloped and lacking the kind of emotional heft that could easily have been earned with a tweaked ending, works if you’re just watching for the spectacle or if you’re looking for slightly deeper thematic parallels.

Where Onward suffers a little is with its own conceit; there’s something a little off about seeing an incredible fantasy world stripped of its magic. Having two elves whose “mighty steed” is a beaten-up old van with a unicorn on the side is funny initially - and then briefly much funnier a little later - but, after a second thought, feels a little depressing. It’s a similar sort of sinking feeling to watching Sonic the Hedgehog ride around in a car at a tenth of his top speed, and who would put that in a movie?

In Onward, Ian’s attitude is the norm and it’s Barley and his obsession with D&D-a-like ‘Quests of Yore’ who is unusual in this story for committing totally to the magic of his own world. This pervading cynical attitude to magic is far less Shrek and far more Max-Landis-Netflix-abomination Bright, a comparison that’s a real grind for a touching Pixar movie.

Where Onward suffers a little is with its own conceit; there’s something a little off about seeing an incredible fantasy world stripped of its magic

Very much a passion project for director Dan Scanlon, who based the story on his own experiences of losing his father at a young age, the emotional beats are sincere. Scanlon is otherwise known primarily for helming the enjoyable but mostly disposable Monsters University, a heartfelt take on campus movies. It’s interesting then that M.U. could easily be said to inhabit the same parallel pseudo 1980s era as Onward, culturally speaking. Ostensibly set in the modern world, there are a few clunky expository scenes to explain why the boys are cut off from technology and so what Monsters was to films like Revenge of the Nerds, Onward might be to Back to the Future or Bill and Ted. Both films could also be said to inhabit that corner of pop-culture infused nostalgia that Pixar usually steers clear of and, without the familiar loved characters that populated his last film, it sometimes feels like one of the most un-Pixar Pixar movies. That’s not entirely a criticism: Onward is exactly what Pixar should be doing, using big franchise winners to bankroll personal and more daring stories. It recently worked miracles with Coco and, while this film is no Coco, it’s certainly more substantial than Monsters University. It’s just that when Pixar rolls the dice with a more personal project, we’re used to them scoring a critical hit, so when they simply roll a success it almost feels like a disappointment. Almost.

But it’s a Pixar movie, with humour, visuals and impossibly wide appeal intact and, most importantly, it tugs at the heartstrings when it really counts.

The impossible reunion is one of the most powerful plot devices in cinema, a sure-fire tear jerker, but the real triumph in Onward is a much more earthly reconnection, and while it’s not a direct hit, Scanlon and his party pull it off at the eleventh hour, gain a bonus roll and level up.