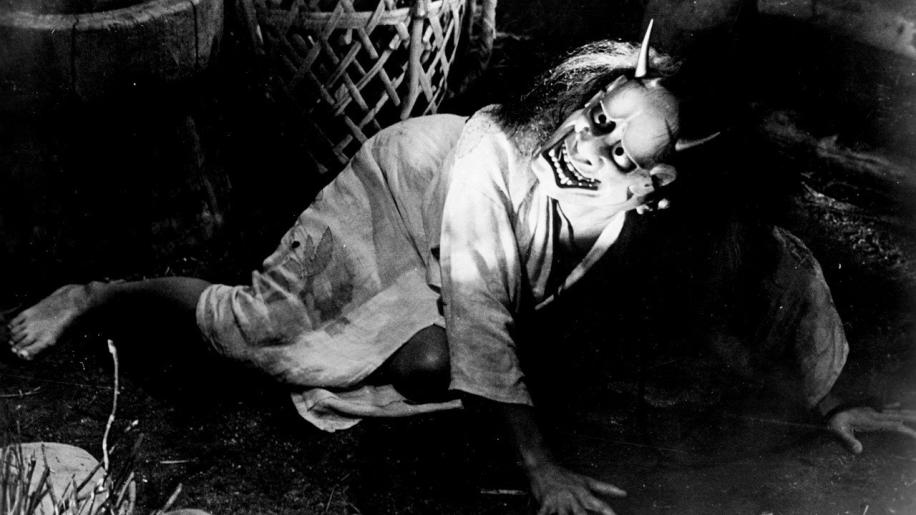 Whilst a civil war rages throughout medieval Japan, a young woman and her mother in law await the return of their loved one. Camped out in a hidden, desolate marsh, full of thick, 7 foot high susuki grasses, the two women do what they must for food.

The women chase, trap and eventually murder any lost samurai who are unlucky enough to be wandering through the grasses. The co-conspirators strip the bodies for any belongings of value, and then trade the items for grain. The bodies are disposed of in a deep hole in the ground.

Two may well be company, but three is certainly a crowd when an old neighbour, a man called Hachi shows up with bad news about the missing relative.

Lust, jealousy, manipulation and murder hang over this trio like a poisonous cloud, but all is resolved when a cursed demon mask eventually makes an appearance...

This is Japanese director Kaneto Shindo's tenth film, and is a masterpiece. Although most people seem to remember this film as a tale of supernatural terror, it isn't until the last 20 minutes or so of this film that Shindo moves into that territory that the Japanese know so well. The large bulk of the story plays like a morality tale, and shows just how low people will go to survive. It's clear from the start that the two women (only known as Woman and Young Woman in the cast listing) are not good people - although driven by hunger, they are murders. Yet by the end of the film, it's interesting that the audience's perception of the young woman is now good, and the older woman bad - the fact they are both murders and manipulators has been expertly manipulated by Shindo.

Made and released in 1964, and shot in black and white, the film feels ahead of it's time. The sexual elements of the story are not glossed over, and probably over 20 minutes of the film contains nudity, which at first is surprising considering the age of the movie. These scenes are presented with not so much taste, but in a more “matter of fact” style - in fact, the nudity is a plot point which kicks in when Hachi shows up.

The acting is excellent across the board (there are only five speaking parts). Nobuko Otowa and Jitsuko Yoshimura offer subtle, brave performances as the two women, joined by family, but split by jealously. Kei Sato plays Hachi, also a thoroughly dislikeable character, who only has his mind on one thing - bedding the young woman.

The photography by Kiyomi Kuroda is astonishing - full of interesting compositions - striking uses of contrast and perspective make for a dazzling spectacle - especially when you consider the limited number of locations used. He certainly wins the award for “most menacing susuki grass.”

Upon watching this film for the first time, I jumped out of my skin about a minute or so into the film as Hikaru Hayashi's music kicked in. Thoughtful, atmospheric and dynamic, this is a first class score, that is both transparent whilst also being potent enough to creep under you skin.....

The supernatural elements of the story are based upon a Buddhist fable called “A Mask with Flesh” which Shindo adapted into the screenplay for Onibaba (you can read a translation of this in the booklet which comes with the film). Its funny how what was originally a highly moral religious story, is twisted by Shindo into something altogether less wholesome. When you watch Onibaba, its noticeable how many modern film makers have been influenced by it. The young woman being chased in this film is shot almost identically to Tobe Hooper classic Texas Chain Saw Massacre's chase sequence thorough the woods. The whole idea of the mask has been copied countless times, most obviously in Lamberto Bava's Demons. And then of course, the hole in the ground has been done a few times too, none better than the original Ringu.