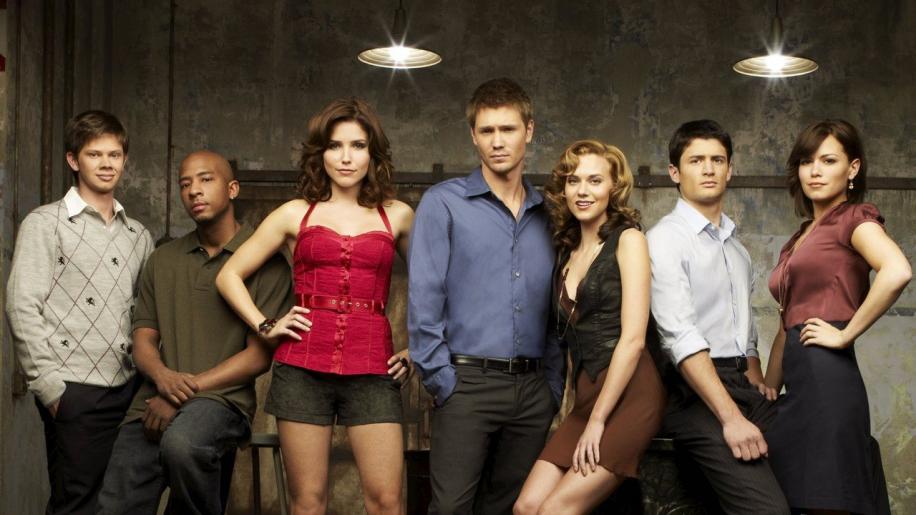 The image has that typical 'American' feel to it. By that I mean the image has a warm diffuse glow as if bathed in perpetual sunlight. This means that detail is not that impressive and the picture looks a little soft. Of course it is a TV show and not a big budget movie so this is par for the course and is in line with similar shows. There does seem to be some edge enhancement present, almost as if an effort was made to 'sharpen' up the image somewhat. Instead it has given the picture a slightly artificial look but it is nothing too distracting. Black levels lack the snap associated with the bigger movies of late and are closer to a dark grey than deep black. Grain is thankfully absent but the occasional artefact is visible in brighter scenes.

Considering its origins, the image is more than acceptable and is indeed quite watchable with it's warm, inviting tones. In fact, the previous season was released with an aspect ratio of non-anamorphic 1.33:1 so this, more widescreen offering is to be welcomed and does offer a much more cinematic feel. But on a purely technical basis, it lacks the qualities of the best that Hollywood can offer. Only a Dolby Digital 2.0 soundtrack is available, no 5.1 surround I'm afraid. This is of course digital stereo which a pro-logic signal can be drawn from and is actually not that bad. It lacks the pinpoint steering of a 5.1 soundtrack but the more diffuse sound is rather nice especially when the musical score comes into play. Speech is a little light and could do with some added bass weight to give voices more accuracy but I never found it difficult to understand what was being said on screen

It would be all too easy to write off the sound based purely on it's lack of a 5.1 surround soundtrack which seems to prominent on both film and TV today but we still tend to listen to music in stereo form and having so much music in this show may have influenced the decision to only include a stereo 2.0 soundtrack. Either way, it is acceptable. Nothing to shout about, but not terrible either. A wealth of extras for the ardent One Tree Hill fan is offered here although I'm not sure whether an 18 year old will want to sit through 3 hours of audio commentary! But then again, if they like the show enough, maybe they will. There are three episodes with audio commentary and they are: Commentary by series creator Mark Schwann on Don't Take Me for Granted, commentary by Mark Schwann and co-star Bryan Greenberg on Unopened Letter to the World and finally commentary by director-actor Paul Johansson on Something I Can Never Have. Like I said not much fun for the target audience I would imagine and not much more fun for those outside the target audience. These are all fairly run-of-the-mill stuff and nothing really worth a special mention. You do get three different perspectives on the show though, from the creator, the actor and the director's point of view. Best commentary? The one by creator, Mark Schwann is the most interesting as he discusses the origins of the series an d how it was originally to be a movie titled 'Ravens'.

Next we have the Unaired Scenes (deleted scenes to you and me) which consist of about 40 minutes of footage that was considered unsuitable for inclusion into the show. This is actually quite entertaining or at least as entertaining as the show itself and fans will enjoy the chance to see even more of their favourite stars on offer here! Next is The Music of One Tree Hill, including a backstage glimpse of the concert tour which features Tyler Hilton and The Wreckers (Tyler plays Chris Keller in the show). This is what the fans will enjoy. The music in the show is great and really helps to generate enthusiasm for the storylines as you watch. Two bands you may have heard of that feature in the show are Keane and Travis as well as solo artist, Sheryl Crow.

Diaries from the Set is basically a behind the scenes look at the making of the show featuring both cast and crew. It is quite amusing to watch the stars play and fool around and muck up their lines as well as interesting to see how they finally get their act together. Change Is Good takes a look at the new characters in this season compared to the original one and include interviews with Felix (Michael Copon) and Chris Keller (Tyler Hilton),

Finally there is the bonus episode, What I Like About You which is taken from Season 1 and is described as being a 'limited edition' disc. I suppose this is included to introduce those not familiar with the original series to the main characters but how much of a 'limited edition' it is remains to be seen. That's about it for the extras. This could have been one of those occasions where I went right off doing reviews! I mean imagine that I had to sit through 23 episodes, plus hours of extras of something that was total drivel. Fortunately, it was only partial drivel! This is a show aimed specifically at a certain type of viewer.....a young one. For us old fogies, we may demand a little more from our entertainment, less stereotypical, more depth and more originality. But then we also like shows such as Neighbours, Desperate Housewives and Nip 'n' Tuck so maybe we shouldn't be so quick to dismiss soaps aimed at the youth of today. It's disposable entertainment, but entertainment all the same. You never know, you may just get hooked and sign up for that evening class too!