Powerful, artistic, high-minded and stylish from head to toe. 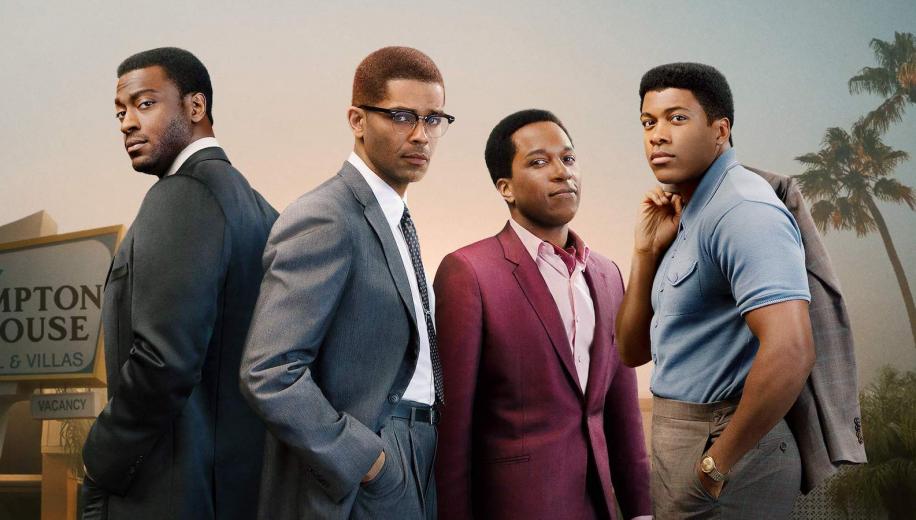 Powerful, artistic, high-minded and stylish from head to toe. These words could just as easily describe the four men at the heart of Regina King’s directorial debut as the film itself. One Night in Miami takes some artistic liberties with its portrayal of a real historic meeting of minds, but grounds itself so forcefully in politics and humanity that it forms what might well be one of the most realistic and striking films of this year.

The vast majority of the film takes place in an unassuming hotel room in Miami Beach. It’s 25th February 1964, and boxer Cassius Clay (Eli Goree) has just been crowned Champion of the World. This hotel room is to be the site of his “victory party”, which actually turns out to be an important and revelatory conversation between Clay and three other titanic figures of American history – human rights activist Malcolm X (Kingsley Ben-Adir), soul singer Sam Cooke (Leslie Odom Jr) and NFL star Jim Brown (Aldis Hodge).

The film is written by Kemp Powers, who co-wrote and co-directed Pixar’s recent hit Soul, and is based on his 2013 play. Both imagine the conversation and actions that happened behind closed doors at this celebrity conference, which really did take place. Regina King, best known for her storied acting career, makes her directorial debut here in true style; the film stays true to much of the play’s taut, well-paced dialogue yet opens the filmic world up into something that encompasses far more than just that one hotel room.

Indeed, the film introduces us to our characters out in the real world, showing them in their elements and also demonstrating just how difficult it is to exist – let alone thrive – as a black person in the 1960s. The film begins with Clay being KO’d during a 1963 bout. We meet Cooke on stage at Copacabana Club, where he sings for a deeply unimpressed all-white crowd. Brown drives to meet a close family friend (Beau Bridges) on his front porch for a short conversation that flows from good-natured praise and chat to a shocking yet understated reminder of the significance of race in America.

These opening scenes lay out the world of these four men for us, and show us each man’s motivations, struggles and personalities in a subtle way that is only as didactic as it needs to be. The play itself is a chamber piece, and while much of the film’s action also takes place in a single setting, King and Powers add extra context and meaning to make it absorbing enough to counter any momentary lulls in action.

This isn’t a big, exciting, action-thriller type film. It’s slow and subtle and meaningful – don’t come in expecting flashy set pieces and big moments. That’s not the point – the point is all these little moments, looks and lines that bear greater meaning. It’s a huge narrative and scope operating on a small stage; this is exemplified by Terence Blanchard’s score of piano solos and singular jazz melodies.

It’s hard to pick the strongest element of the film. Everything works so well in harmony – from Powers’ enlivened dialogue brought to life by King’s pitch-perfect directorial decisions, to four boldly charismatic performances from the lead ensemble.

Everything works so well in harmony

King manages to balance screen time for each of the lead quartet so no character outshines the others. Each are allowed to have individual personalities – tempers, humours, opinions – while still remain part of this collective council. Odom Jr’s silky smooth Cooke is countered by Ben-Adir’s bristling, alert and forceful Malcolm. We see Brown’s ever-rising disillusionment and cynicism through Hodge’s balanced, quietly powerful performance, while Goree is masterful and transformative as the iconic Clay.

Though the film is in perfect balance, there are a few moments that remain stand-outs. The opening sequence is eloquently powerful, while any combative exchanges between Cooke and Malcolm are bristling and electric. They form the perfect counterbalance to the scene capturing Odom Jr’s rendition of Chain Gang, as Cooke is watched by an impressed and inspired Malcolm.

King humanises these historic titans, who have been portrayed and studied and examined countless times before. We’re in the room with them, watching them and empathising with them. These are engaging, enigmatic figures from history who are almost frighteningly well played here. The contrast between the opening situating scenes and the struggles the men vocalise over ice cream in the hotel room is beautifully portrayed on-screen.

One Night in Miami is available now in 4K UHD HDR with an Amazon Prime Video subscription.
﻿