One Flew Over the Cuckoo's Nest Movie Review 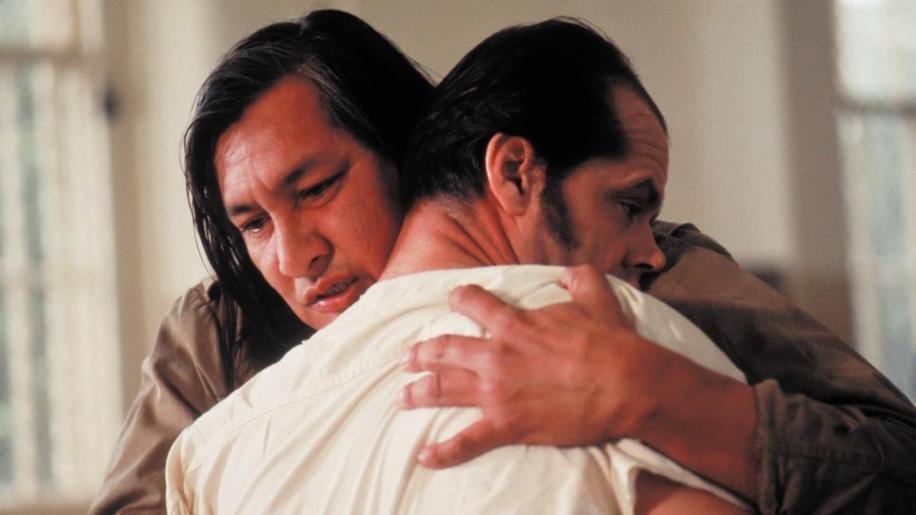 Milos Foreman brought this film to our screens in 1975 when America was reeling from the protracted yet failed war in Vietnam, it was a time of solace for the American people as a whole, a time for wounds to be healed. It was the birthplace of that most eccentric of actors, Christopher Lloyd, as well as paving the way for early stalwarts like Danny DeVito. There's other faces in there as well that you'll obviously recognise, most notably of course one Jack Nicholson and this feature like Easy Rider before it and The Shining after it really sealed Jack's doom as playing the raised eyebrow madman bestowed upon him for some time.
R.P. McMurphy (Jack Nicholson) is assigned to a mental institution for some minor yet disturbing violent crimes. In reality he's not really insane, he's just playing the system to get some easy time. Little does he know however that time in this institution is neither easy nor does he have control over it ending; that privilege has been removed from him. The state can now hold McMurphy for as long as they feel he remains a danger to society. Not being the brightest bulb in the chandelier McMurphy doesn't then knuckle down and serve his time without question; his rebellious nature drives him forward to be the man he always has been infecting the rest of the inmates with a sense of adventure, misadventure and ultimately a belief within themselves.

We meet some varied characters in One Flew Over The Cuckoo's Nest and all of them have their own story to tell, Billy Bibbit (Brad Dourif) perhaps the most poignant of these. It seems he has been down trodden all of his life until now he firmly believes that he is worthless, he cannot do anything with his life, the persecution from his mother has changed this young man's life irreparably and as McMurphy points out it's not an institution he belongs in, it's just that he's going through the same feelings that everyone else his age does, he just needs to break free, become his own man and make his own decisions. Martini (Danny DeVito) and Jim Taber (Christopher Lloyd), two actors who would grace our screens again for many years in the TV series TAXI, play inmates of unknown origin who perhaps indeed do belong there, they're slightly oddball, not necessarily dangerous but certainly out there. Chief Bromden (Will Sampson) is an old Indian incarcerated for no known reason but happy enough to stay there until he realises that he's fooling himself, and his ancestors by not allowing himself the freedoms his people naturally regarded as their own to enjoy. It is ultimately his story more than anyone else's that we learn here.

We feel he's been brought into a world long past his time and he should have been raised with his tribe some hundred years earlier. This was not the case and he was born into a busy world where no one seems to care about anyone else. The Chief is at odds with this world and for his own sanity, it seems as though he has shut himself off from the world because he cannot cope with all of its inhumanity. Ultimately though The Chief finally realises that it is freedom that is paramount to anyone's life; freedom to do as one chooses as long as those choices are not detrimental to others. It is this which he re-learns from McMurphy and it is this which finally provides his own salvation.

Other characters in the ward include Dale Harding (William Redfield) and Ellis (Michael Berryman) two individuals who have themselves taken solace in the ward by their own hand because one dramatic moment in their life led to them rejecting society and the pressures which naturally come with it.

Throughout it all we have the ever present R.P. McMurphy and his only role within this film is to provide the catalyst to all around him. To show that the inmates of the institution have more to offer themselves and the world other than wasting their lives away in here. To show Nurse Ratched (Louise Fletcher) that she is in fact caring for human beings and not just soulless entities passing through the system. The continual banter between McMurphy and Ratched is both intriguing and frustrating as at some point we hope that Ratched will see the error of her ways and alter her tune; this is never to be though and as the film progresses the more frustrated the viewer becomes with her character and the more understanding of McMurphy's actions after that.

It is this interaction between the characters and McMurphy and between themselves after that which propels the movie forward. There are some deviances from this setting and at times they don't work. It's plausible to see McMurphy being incarcerated in the fashion he is, plausible to see and understand every character's reason for being in the institution but it goes a little too far when McMurphy holds an impromptu alcohol fuelled party within the ward or escapes en mass with inmates in tow to go on an extended fishing trip. These two scenes are certainly in there though to show that it if the natural freedoms were perhaps given to those that need it the most then they might recuperate and assimilate back into society a little quicker. These scenes are a little too heavy handed though and their message hits home like a veritable sledge hammer; it is the interaction on the ward between patient and patient, patient and staff and more importantly patient and institution which is the main thrust of this film. Milos has given us an interaction movie within a close knit community with a sense of belonging and self esteem perhaps not bettered until the awesome Shawshank Redemption graced our screens. He went onto other intelligent works such as Amadeus, a swipe at American culture in The People vs Larry Flint and the altogether excellent Man on the Moon; never since though has he produced a work which drags emotion from the viewer. Emotion where the viewer feels disgust at both a society and the institution which incarcerates people in this fashion, or emotion where the viewer is enthralled by the inmate's antics and revels in the brief pleasure that they enjoy.

One Flew Over the Cuckoo's Nest is an intelligent piece of direction coupled with an excellent cast who produce some sterling work. At the top of his game yet again is Nicholson and guided by Milos here you will rarely see any better work from him, perhaps Chinatown but not many others I would wager. It's a demanding movie on the mind and heart and one which you really have to be in the mood to view and as such whilst it does have 'reviewability' those viewing may be not few but certainly far between one another. Still this again should be added to anyone's collection; it's one of a selection of films from the 70s which should grace anyone's shelves.