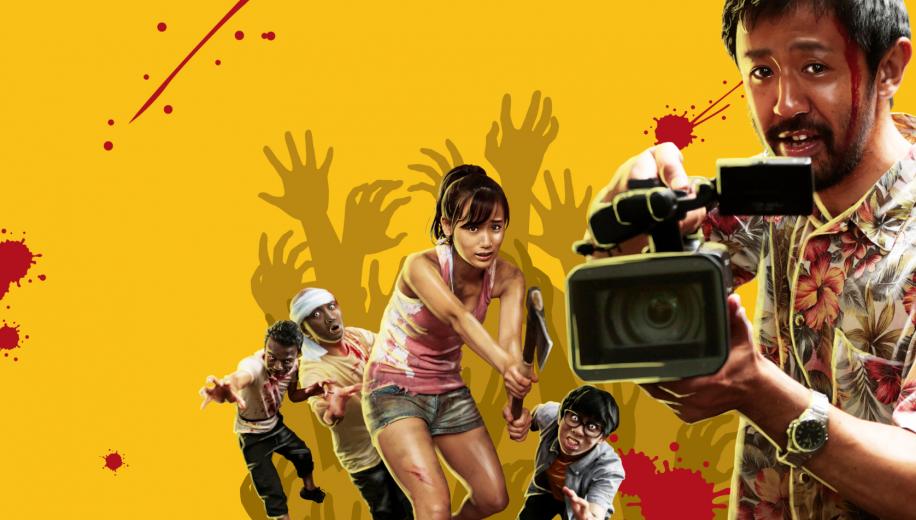 One Cut of the Dead Review

This ingeniously inventive meta-zom-com whips out a succession of reveals to make for an engaging romp through amateur zombie filmmaking.

The best way to watch One Cut of the Dead is to go into it knowing nothing about it. Don't expect anything even modestly budgeted (although, for internal movie logic reasons, the film quality does drastically shift midway through) and just run with the supposedly amateur acting, and it's a refreshing blast of inspired indie filmmaking by writer/editor/director Shin'ichirō Ueda, who had reportedly borrowed some ideas from long-running stage play Ghost in the Box.

It's clever, it's meta, it's briefly disconcerting, and it's a whole load of fun

Both wielding and deconstructing a 37-minute single-cut take, One Cut of the Dead superbly plays with your expectations right from the opening sequence, managing to somehow craft a feature that is equal parts zombie movie documentary, creepy zombie movie, and zombie movie mockumentary, lovingly playing with the setup and reveals, and finding inspiration in on-set antics which likely gift it plenty of rewatch value, which you will kind-of do anyway just by watching it through in the first place! It's clever, it's meta, it's briefly disconcerting (the abandoned water treatment plant tale is ingenious), and it's a whole load of fun.

One Cut of the Dead Blu-ray Video

One Cut of the Dead comes to UK Blu-ray courtesy of Third Window Films. This Limited Edition set presents a High Definition 1080p image in the film's original aspect ratio of widescreen 1.85:1.

... a perfectly suitable look for the film

One Cut of the Dead is, by its very nature, a very rough-looking film - at least in parts - but this is wholly intentional, going for multiple handheld-in-handheld shots of extremely variable quality, delivering softness and washed-out tones. At some point this shifts drastically, enjoying images which purportedly range from 2-4K in source, and showing a vast improvement in terms of clarity, detailing, and colour reproduction. It's still a pretty low budget feature, but the intentionally variable quality ironically both highlights just how good the image can get, whilst also leaving it largely impossible demo material (not that you'd try). It's generally a perfectly suitable look for the movie, but don't necessarily expect anything desperately special.

One Cut of the Dead Blu-ray Audio

One Cut of the Dead's Blu-ray release enjoys a healthy Japanese DTS-HD Master Audio 2.0 track with decent English subtitles. Much like the video - but not as drastically so - the soundscape opens up distinctly between the two movie worlds, coming across as quite (intentionally) restricted during the opening sequence, but feeling much more 'alive' later on.

Dialogue remains well-prioritised, and there are some fun effects noises utilised (you'll have to watch to the end to find out just how fun it can get), with a little score music thrown in to keep things rolling. Hardly a boisterous offering, it's an engaging track nonetheless that gets the job done.

One Cut of the Dead Hollywood Edition Blu-ray Extras

Third Window Films' UK Limited Edition Blu-ray release of One Cut of the Dead is a pretty impressive release which delivers not only the original movie, but also the shorter spin-off "One Cut of the Dead in Hollywood", which features a slightly bigger cast but is basically the same core movie.

The further extras include the hefty Making of One Cut of the Dead Documentary, clocking in at 45 minutes, as well as an 18 minute Interview with Director Shinichiro Ueda, the original Raw "One Cut of the Dead" GoPro Footage, which is some 38 minutes' long (with limited sound), a short Instruction Video and 5 minutes of Outtakes.

One Cut of the Dead Hollywood Edition Blu-ray Verdict

One Cut of the Dead is inventive indie filmmaking at its best, and likely should be watched knowing as little as possible about it. Suffice to say it cleverly involves single-cut takes, fake zombies, and real zombies... or does it?

... for those who still haven't discovered this gem, now's the best time

Third Window Film's Limited Edition UK Blu-ray release of One Cut of the Dead delivers a strong presentation of the main feature, the spin-off , and a whole bunch of extra features. For fans, it comes highly recommended, and for those who still haven't discovered this gem, now's the best time!

One Cut of the Dead: Hollywood Edition is released by Third Window Films in the UK as a Limited Edition set and available on Blu-ray™ now.