Once Upon a Time... in Hollywood 4K Blu-ray Review

"When you come to the end of the line with a buddy who is more than a brother, and a little less than a wife, getting blind drunk together is really the only way to say farewell" 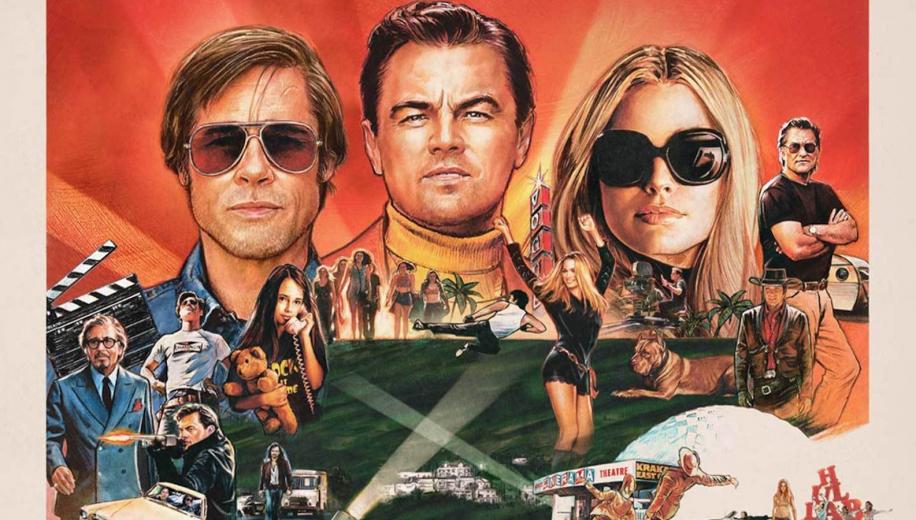 Once Upon a Time... in Hollywood Film Review

Tarantino's 9th is one of the biggest event movies of 2019, a classically styled and suitably epic ode to Hollywood, riding high on its DiCaprio/Pitt bromance.

Certainly, the last three decades have been an interesting time with the filmmaker, with a striking debut in Reservoir Dogs, and a career-defining sophomore outing with Pulp Fiction, making something of a magnum opus in his Kill Bills, then venturing through WWII for Inglourious Basterds before hitting the Wild West for his latest two, Django Unchained and The Hateful Eight. Were it not for his insistence that there are only 9 films on his resume, Once Upon a Time ... in Hollywood would be a fine and fitting way to round out his career, clocking in with the usual 160-ish minute runtime synonymous with a Tarantino film, and boasting at least one of the Top 3 most impressive ensemble cast list of the year (which is a tough accomplishment in the same year as Avengers: Endgame and The Irishman).

Every single one of Tarantino's movies - for good or bad - is a must-see event, and Once Upon a Time ... in Hollywood is certainly no exception, arguably proving his most assured effort since Kill Bill, taking its sweet time in almost every shot, every scene, and somehow winning you over in the process. After the end of the first long, languid car drive where nothing happens, you realise what you're in for - this is a classic Tarantino production about a classic age in Hollywood (or at least the death of a classic age in Hollywood), and he's sure as hell going to savour every moment, going hard on some great scenes of story-driving dialogue, and playing out a few fiery bursts of action - normally through in-movie sequences showing DiCaprio's has-been actor Rick Dalton's greatest hits, but also, before we get to that finale, in a memorable moment with Tarantino's version of Bruce Lee.


This is classic Tarantino: controversial, fresh and unapologetically old school - more than happy to take its bloody time getting to the damn point

Although never reaching that level of tension that some of Tarantino's classics (or even just classic scenes, like Waltz's moment in Inglourious Basterds) have had, the filmmaker does well to paint the creepy, infectious malevolence of the brainwashed zombie hippie cult Manson group, affording the film a level of underlying unease. And, on the screen within the screen, he does an impressive job turning DiCaprio into an emotional wreck, forgetting lines, and sweating his way through his performance - but also championing the hope for an underdog comeback moment. However, despite the easier part, it's Pitt who absolutely steals the show. It's the best we've seen from him in years, and his quietly tough-as-nails stunt double is a choice role that provides some welcome air-punching moments. Margo Robbie doesn't fare quite as well (now's a good time to get up to date on Sharon Tate), with Tarantino's gaze spending more time on her legs than anything else. Still, it's not her film, and the Pitt/DiCaprio bromance drives the whole bloody affair to tremendous effect, carrying a strange warmth and companionship that is actually quite unusual to find in movies these days - an organic buddy-buddy relationship that feels wonderfully natural. Indeed, this is probably the director's most heartfelt movie ever.

This is Tarantino, so some might feel the undeniably indulgently languid pace, the abortive cameos, the seemingly-going-nowhere scenes, but if you go with it all you may find that this is mostly also classic Tarantino: controversial, fresh and unapologetically old school - more than happy to take its bloody time getting to the damn point. From the dialogue to the acting, to the cast and the cameos; from the start to the very end - complete with mid-credits scenes - this is a must-see event movie. And, even as a huge Marvel fan, it's great to see a must-see blockbuster that isn't superhero driven.

Once Upon a Time... in Hollywood UHD 4K Blu-ray Picture


Once Upon a Time ... in Hollywood drops onto UK 4K Ultra HD Blu-ray - for once - in advance of its US counterpart, even if only by a few days, sporting a glorious native 4K video presentation that looks sensational.

Lovingly shot on film, and unhindered by any 2K digital intermediate, this is a fabulous looking movie - and there's no real surprise there given Tarantino's love for the format. Detail is excellent, lapping up the right textures; the lines on the ageing, potentially has-been, actors' faces, the set makeup and lavish settings themselves, as well as the impressively authentic period Hollywood landscape, which really feels like a character of its own. Whilst languid in pacing, the cinematography is also very assured, and the confidence resounds here with perfectly framed shots, stunning pans and zooms, allowing the camera to roll across the landscape - and the characters - with care and attention, all of which is reflected in this presentation.

The colour scheme of course benefits from the advantages of WCG and HDR, which give the early night sequences impenetrable blacks but superior shadow detail so you never feel that it's too black, and can always see every little iota of detail that you're supposed to see. The range to peak brightness brings added pop to the image, and even if the dusty, perpetual, California low sun informs the palette with a warm sun-drenched feel, there's still some lovely brightness on offer and some glorious midday-sun daytime sequences. It's a rich palette, vibrant and happy to boast some nice primaries (the party scene showcases these mostly through outfits!) and '69 looks absolutely gorgeous, rounding out 2019 with a superb demo presentation.

Once Upon a Time... in Hollywood UHD 4K Blu-ray Sound

The DTS-HD Master Audio 7.1 track is pretty damn potent
Disappointingly, there's no Atmos on offer here, but the DTS-HD Master Audio 7.1 track is pretty damn potent anyway, soon making you forget you're missing anything a discrete object-based track could provide, and sweeping you up in familiar 60s tracks and explosive action segments (albeit initially mostly through faux trailers for Dalton's movies). With the audio seeping out from tape and record players throughout, there's a wonderful backdrop and atmosphere created for the movie, where interstitial moments of action gets to add some LFE impact, and light nuances bring the environment to life across the surrounds, bringing the space to life with silence and the wide-open emptiness of vacant lots and sets, as well as the rolling wind over the Hollywood hills. Dialogue gets keen priority throughout - going toe-to-toe with the score for which is more integral to the movie - and overall it's a great mix.

Once Upon a Time... in Hollywood UHD 4K Blu-ray Extras

Curiously a few additional scenes make it onto the 4K disc, with the remaining Behind the Scenes Featurettes available on the Blu-ray

Once Upon a Time... in Hollywood 4K Blu-ray Review


Even as a huge Marvel fan, it's great to see a must-see blockbuster that isn't superhero driven
Once Upon a Time ... in Hollywood is a fabulous return to form for Tarantino, and enjoys a gorgeous native 4K presentation, great soundtrack, and a few nice extras on both the UHD and accompanying Blu-ray. It's a must-have release to pick up before the end of the year.