Once Upon a Time in High School Movie Review 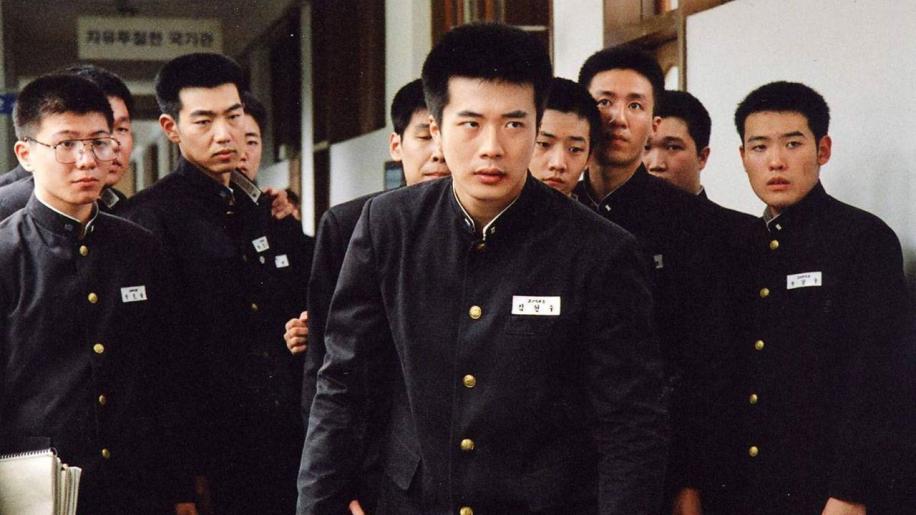 I'll be honest, when I asked to review this Korean movie (full title Spirits of Jeet Kune Do : Once Upon A Time In High School) I thought I would be watching a fusion of Bruce Lee (famous of course for the development of Jeet Kune Do) and Sergio Leone's man with no name trilogy, a sort of a Noodle Western if you will. Alas this is not the case, as High School (as I will refer to it from now on) is much, much more about life as a teenager in High School than it is about kicking ass the Bruce Lee way.

Set in 1978 against the backdrop of a ruthlessly oppressive military dictatorship High School tells a powerful story about the difficulties of life as a teenager growing up in such a system. Hyun-soo (Kwon Sang-woo) is a painfully shy and quiet teenager who has just transferred to Jungmoon High School; a single sex school where military cadets, for whom the words corporal punishment could have been defined, uphold discipline. Beatings with a baseball bat occur at the school gate if your uniform is at all out of place, and teachers think nothing of taking off their glasses, rolling up their sleeves and beating seven bells out of students who under perform. Hyun-soo is a social misfit. His father who teaches martial arts at his own gym is bringing him up the hard way. He too believes in beatings to force home a point of view. Hyun-soo has to try to roll with the punches and survive. His life is made bearable by two things, his love of Bruce Lee, his idol, and his unrequited love for Eun-ju (Han Ka-in) a girl he sees regularly on the bus to school. He quietly adores her from afar, and dreams of being with her, but when his chances to talk or dance with her arise, he is too shy to act, and consequently sees her start a relationship with his best friend Woo-sik, who is everything Hyun-soo is not, bold confident and sure.

Building slowly like a simmering volcano, the story struggles along with little pace or enthusiasm. While it may be a realistic portrait of the 70,s in Korean High School not enough happens to warrant a two hour run time. The opening scenes and closing scenes are full of fraught emotion but a long and saggy middle third means the viewer loses interest long before the end. Hyun-soo is suuuch a drip that his character becomes unlikeable. By the time he strikes back at those who have wronged him, you can't really find it in your heart to cheer for him. Ultimately, whether you view this film as a social commentary on modern Korean history, as a love story, or as a high school drama, the pacing kills it stone dead.