Once Upon a Time in China Blu-ray Review 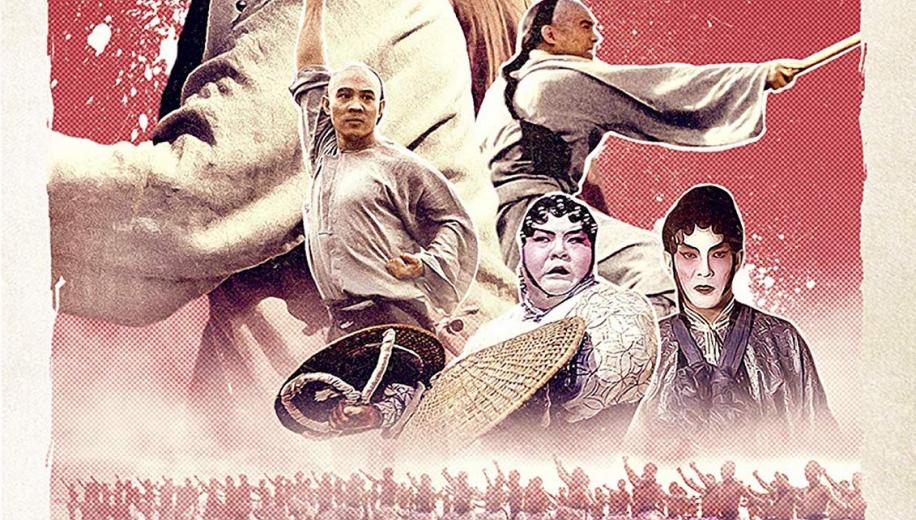 Once Upon a Time in China Film Review

Chinese folk hero, Wong Fei-hung (which was the original title of the series), is so popular that almost a hundred films and TV shows have been made about him over the decades, including some 70 with the same actor - Kwan Tak-hing - in the role for a whopping 40 years, and even an early couple of movies for Jackie Chan playing a young version of the real-life character in his Drunken Master series.

Renowned not only for his superior martial arts skills but also for holding true to the ethos of martial arts, these days the best remembered incarnation of Wong Fei-hung is the one delivered by Jet Li, who'd been in the movie business for almost a decade, but managed to attain superstardom - and even success in the West - largely as a result of his Once Upon a Time in China films.

Directed by Tsui Hark, who is a bit like De Palma to John Woo's Scorsese (and frequently collaborated with Woo), and is now likely best remembered for his Detective Dee series, having failed to crack Hollywood with a couple of unsuccessful Van Damme flicks (the terrible Knock Off and the guilty pleasure than is Double Team), Once Upon a Time in China was not only Hark's most successful production until that point, but also one of his most personal, finding a channel for his innate Chinese nationalism (and concerns about Western influence), and using it to bring this celebrated folk hero to life, arguably better than ever before or since.


Jet Li managed to attain superstardom largely as a result of his Once Upon a Time in China films.

The story sees Li's Wong Fei-hung struggling during the uneasy Qing Dynasty, with China entering into many dubious treaties with various other territories, including the French and Americans, whose soldiers bring their guns to bear at the slightest sound of even a firecracker going off. Both acting as the martial arts instructor of the local militia and running a local medical clinic on the side, Wong Fei-hung encounters trouble when he attempts to stop gangsters from extorting protection money from the town's small businesses, being instead himself labelled a troublemaker (due to corrupt American officials who have a vested interest in seeing the gang thrive) and seeing his militia disbanded. All the while, a notorious martial artist from another territory - "Iron Vest" - seeks to challenge Wong Fei-hung so that he can finally gain the title of the best martial artist in the land.

Once Upon a Time in China takes a while to get going - it's first half tries to build a dense political backdrop and afford it some historical factuality (the umbrella scene is reportedly based on Wong Fei-hung's real-life skills with the seemingly innocuous 'weapon') and also borrows a few more slapstick moments from the Jackie Chan style of physical comedy. Indeed, the film can easily be compared to Chan's earlier Project A series, but Jet Li's iconic character eventually comes into his own during the second hour, when his nemesis Iron Vest makes his bloody Road House-style throat-ripping entrance and Li engages in almost wall-to-wall action (coordinated by The Matrix's action choreographer, no less) for the remaining hour, often going up against dozens of opponents but arguably more impressive in his one-on-ones with Yen Shi-kwan's Iron Vest. Perhaps benefiting from classic status more as a result of the impact that it had upon martial arts cinema going forward, Jet Li's real breakthrough into stardom is still an intoxicating actioner that'll have you hooked to the series by the end.

Once Upon a Time in China Blu-ray Picture The Once Upon a Time in China trilogy of films each earn themselves brand new 4K remasters thanks to Eureka, making their UK debut on a 4-disc Region B-locked Blu-ray set which promotes the series better than it has ever looked before.

1991's Once Upon a Time in China is the eldest - and was afforded the smallest budget - but still manages to frequently impress with this 1080p/AVC-encoded High Definition 4K-remastered video presentation, framed in the movie's original theatrical aspect ratio of 2.4:1 widescreen.


A great looking presentation which will come as a shocking step up for the majority of fans who are still running an old DVD copy.

Detail is often excellent, with Hark's broader - oftentimes surprisingly panoramic - shots of the fight sequences bringing the focal central images to wondrous life, with rich texturing and clarity. Sure, there's some evident softness, but it won't impinge upon your enjoyment of the martial arts classic, whose striking improvements come not just in terms of the increase in detail but also a much more stable grain rendering - suggesting also that DNR application is much more subtle than on previous home releases of this feature.

The colour scheme too has been significantly improved during the remastering process, bringing some fabulously vivid reds to the fore - evident right from the opening dragon ceremony, and continuing throughout the piece. Browns are rich; black levels are deep and afford some strong shadow detail and, whilst the seams in the sets and painted backgrounds do sometimes show through, it's a great looking presentation which will come as a shocking step up for the majority of fans who are still running an old DVD copy, but which also easily bests the HK Blu-ray releases that some may have imported a decade back.

Once Upon a Time in China Blu-ray Sound Once Upon a Time in China has always had some form of 'dubbed' audio (often of the 'synch-sound' variety, which was anything but). Cantonese, Mandarin - obviously English - it doesn't matter what track you pick: the dialogue is, at best, out of sync and, at worst, completely different from what the characters are mouthing. It's hard to discern whether or not it would have been possible to correct this issue for a modern release of the feature, but Eureka have not done so, instead choosing to offer up what is promoted as the 'original' Cantonese in both a lossless Linear PCM 1.0 mono and 2.0 stereo option, a Mandarin LPCM 2.0 track, and an English DTS-HD Master Audio 5.1 dub.


Likely the best the film has ever sounded.

The feature defaults to the Cantonese LPCM 1.0 mono, and this is the one that appears to have had the best restoration work done on it, with a much less 'tinny' sound to it than the 2.0 alternative, or the Mandarin (let's not even talk about the English dub - it may be the only lossless 5.1 offering but, even though the dialogue is still not in sync on the Cantonese offering, you can't watch this film with Jet Li and co. speaking English).

Effects - of the biff-pow Jackie Chan variety - are rendered with some nominal impact, gunshots have that classic late 80s, early 90s echoey twang, and atmospherics are kept to a minimum for this front-dominated affair, but it's still a strong, reasonably natural presentation, promoting the thematic score with some manner of refinement and coming out tops above the alternatives. Dialogue aside - and it's the kind of movie where it doesn't take long to get to the point where you're not watching the lips; you're either watching the action or reading the competent subs (which are peppered with f-bombs) - it's likely the best the film has ever sounded.

Once Upon a Time in China Blu-ray Extras Eureka's Once Upon a Time in China Blu-ray release is actually part of a much more expansive trilogy set, that's not really even a trilogy, with an extras disc that actually includes the sixth film in the series (the only other one starring Li) as an 'extra'. Rather than list these here, it will be reviewed separately; instead, this extras section will focus on the supplemental features available on the Once Upon a Time in China '1' movie disc, however, the score for extras reflects the fact that, as a package, the extras on this release are some of the best of any release this year - not least because they include a whole extra movie!


The extras on this release are some of the best of any release this year - not least because they include a whole extra movie!

The Once Upon a Time in China disc includes an Audio Commentary from martial arts cinema 'expert' Mike Leeder and filmmaker Arne Venema, the first part of an expansive Documentary on The Legend of Wong Fei-hung (which continues on the rest of the discs), Interviews - including an early interview with Jet Li - and the original Trailer. Replicate similar content over the next two film discs and throw in a fourth disc with a further movie and more extras on it, and you get one hell of a package.

Once Upon a Time in China Blu-ray Verdict

Once Upon a Time in China Blu-ray Review Eureka continue to outdo themselves with their work on classic martial arts features, following their Jackie Chan box sets on Police Story I & II and Project A Part I & Part II, with this fantastic 4-film 'trilogy' set of the first three of Tsui Hark's classic, Jet Li-starring Once Upon a Time in China films, as well as the final Jet Li entry - the sixth film directed by Sammo Hung instead of Hark, Once Upon a Time in China and America, which is actually included as an 'extra' despite being given its very own 2K restoration.


One hell of a package.

Eureka's Blu-ray package of the 'trilogy' is fabulous, we're not even going to dispute the 10/10 extras, but the 4K-remastered movies also look superbly restored and, source audio issues notwithstanding, the audio options are at least numerous, leaving this another Eureka must-have release to round out the year.