Once Upon a Time in Anatolia Movie Review 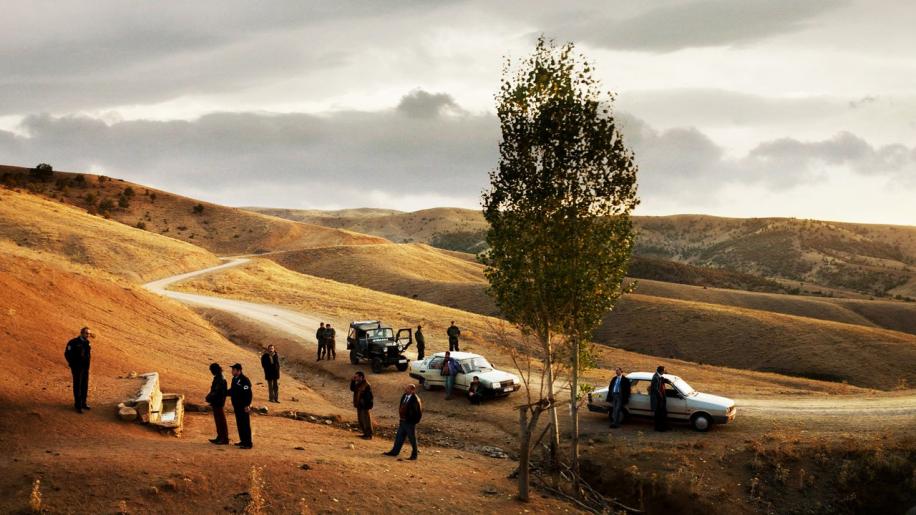 If I was sat in a room with a hundred movie critics watching Once Upon a Time in Anatolia, I'd be the one they all groan and scoff at when I sheepishly raise my hand to say - "I didn't get it."

It's undoubtedly a beautiful piece that intends to be as visually provocative as possible, and here it succeeds with flying colours, but with a very stop-start narrative that unseats the movie somewhat and can, quite frankly, be a bit of a bore at times. It's not that I'm saying there's anything particularly wrong with the movie, but I found myself at several points during the movie realising that nothing is really happening. You spend quite a lot of the time waiting for something in the story to develop, for the narrative to take a sharp turn, but it doesn't come. It's not a short movie either, and it just feels that much longer because nothing happens.

Indeed, you wouldn't exactly be skirting the realms of the ridiculous if you were to, at this moment, leap out of your chair and declare me a witless moron for making such a claim, but I must admit that despite looking forward to this movie a great deal, I found myself increasingly bamboozled at what, besides the spectacle and incredible acting, this movie really delivers. This is, however, extremely well camouflaged by a mesmerising visual feast and a genuinely remarkable vision for style and quality from acclaimed director Nuri Bilge Ceylan; but the truth is that after watching it, the movie fails to deliver all it promised me.

So, I watched it again.

It's a jigsaw murder mystery at it's core, but one that shuns the norm by dispensing with the traditional three act premise, instead delivering all narrative through character interaction and development. From the get-go, the movie is mysterious, choosing not to spell out the tale that's about to unfold. It opens with a deliciously crafted shot through the dirty, weather stained window of a shack in the middle of nowhere. Three men eat and drink together. Immediately I'm struck by the very deliberate and languid camera movement, drawing me into their conversation, which is really about nothing in particular, before pulling me slowly away to reveal the scale of the landscape that contains them. A man feeds a dog under the glistening stars, insignificant in the vastness of the countryside around him.

Three vehicles trundle over the horizon at night, headlights cutting through the darkness. We observe, from a distance, as several men exit the vehicle. Two, with hands bound in front of them. The three vehicles contain twelve men, ten of whom are investigating a murder, allegedly committed by the other two. One of the perpetrators, it transpires, is leading the Chief of Police, Naci (Yilmaz Erdogan), a short-tempered stout fellow who spends the majority of the movie moaning, and a Prosecutor, Nusret (Taner Birsel), a dignified, well dressed man, his vanity is the prevailing aspect of his personality as we discover during the course of the movie, to an unknown location. The case against the suspects is strong, and is all but ready to go to court for prosecution. They have a confession, they have a suspect, they have the murderers' cohorts; all that's missing is a victim - the only problem being, the murder suspects can't quite remember where they buried the body.

As the group visit various locations, all based on supposition at where the body may be according to the suspects description – Near a round tree – our story is delivered to us almost without us realising. First, we start to get a sense of who the characters are. There's the Police Chief, Naci. He's quite an angry chap, and seems predominantly irritated throughout the movie. If it's not the case and lack of results, it's his wife and family on the phone causing him grief. He takes out his frustrations by picking on his small detail of police officers accompanying him. He's driven to achieve what he claimed he would to the prosecutor; to find the body based on the suspects confession. As things start to go wrong, he worries that the Prosecutor thinks him to be a fool for believing the suspect, and that he will grow angry for having been dragged across the countryside in his nice suit in the middle of the night on some wild goose-chase. Stressed out, and irritable, Naci seems to focus most of his frustrations on his driver, Arab Ali (Ahmet Mümtaz Taylan), jibing at his love for all things culinary, and how this has taken it's toll on the driver's frame.

And then we have Prosecutor Nusret. Carrying an air of authority and vanity, with his references to being likened to Clark Gable in the past, there's something very dislikable about him, though we're given no real deliberate reason for this. Among them, is a local doctor, and a detail of military police accompanying them in another truck, and two gravediggers.

There's also a local Doctor, and a military detail accompanying them, though little development is made of the military detail, the Doctor is ever present with the main characters. I struggled to see why a doctor would be brought along on such an investigation though, unless he was there purely to confirm that having been buried for rather a long time in the wilderness the victim was, indeed, dead.

As the tale grows older, and the characters bicker and snipe at one another, we begin to realise that we're not taking any sides at all. It's a completely impartial observatory role we occupy as the audience. This, in some ways, allows us to objectively soak up everything that's going on from the breathtaking cinematography to the natural acting, however, it also leaves us with a slight sensation of distance from the story. This only really poses a problem in that it doesn't completely draw us in. Nuri Bilge Ceylan keeps us at arm's length the entire time, and although this is utterly intentional, he certainly runs the risk of pushing some audiences away.

So we follow these men across the Turkish countryside, watching as one thing after another goes wrong. The suspects can't remember where they buried the body; the driver doesn't have a map; the gravediggers travelling with them haven't brought a pick; they have no means to cover the body for the journey back, should they ever find it. A cacophony of sequential errors befalls them throughout, and it's this that draws out the individual character traits.

It is in the fact that their objective is obscured from us at the beginning of the movie that we could easily miss the rather passive and subtle turn in narrative; it's not their attempts to find a body that this movie is really about, rather, it's about how this one night extrudes such a broad range of personalities that interact with one another. It's told with a poetry that is impossible to ignore, and I have no doubt that this will be a huge attraction for some audiences.

If you've read anything about this movie so far, then you might be wondering why I'm not following suit with the widespread critical acclaim the movie's received so far. It's not because I thought the movie was overrated, it's just that it's most certainly not for everyone. If you enjoy a more alternative cinema experience, then you're unlikely to go far wrong with Once Upon A Time in Anatolia, however, if the widespread critical acclaim has sparked an interest because you think the movie and the way it's been marketed is reminiscent of foreign No Country for Old Men, then you may be setting yourself up for a disappointment. All the parallels are there with No Country For Old Men, the cinematography, the lighting, the grading, the minimalistic narrative delivery style; but what's missing is a mainstream story arc that audiences love to sink their teeth into. Of course, in saying that I feel I'm slightly killing myself inside, because I do love alternative cinema, and I hate to think of myself as one of those “I didn't really get it” types. I just struggled to get along with Once Upon a Time in Anatolia as much as I'd hoped.

It's unquestionably Art-House Cinema delivered with a poetic twist.