Once a Thief Movie Review 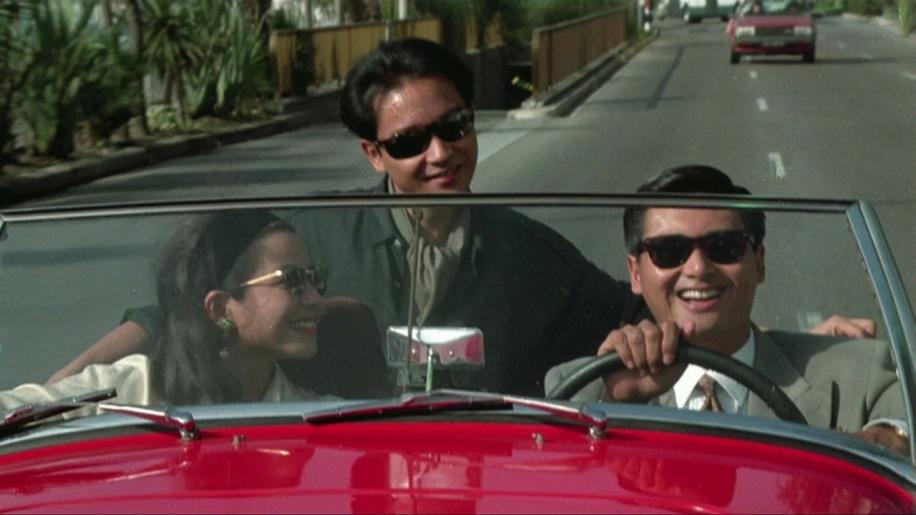 You know a medium is hitting its stride when even the less acclaimed titles from a director’s back catalogue are starting to crop up, and there will be many Hong Kong film fans only too pleased that John Woo is at the forefront of this. With the director having made his mark and almost single-handedly kick-started, nay created, the heroic bloodshed genre, he commenced a four year period of solid blood-spattered output. This period, probably the most creative of his career, saw two bona fide classics in the form of A Better Tomorrow and The Killer as well as the under-rated sequel A Better Tomorrow II (though it’s perhaps fair for even fans to turn their noses up slightly at the ham-fisted gimmick of essentially reviving a dead character under the guise of a twin). This golden era culminated in a more personal, but far darker project, the fraternal tragedy based around the conflict in Vietnam that was A Bullet in the Head (surely up there with Snakes on a Plane in the all time great titles category!). It was fitting then that his next film would deviate from the uniformly macho posturing of criminal honour and squib-fests.

Released the following year to A Bullet in the Head, Once a Thief marked Woo’s attempt at a more light-hearted romp. He would however ensure that fans would take note as the presence of the man who has sometimes been described as his filmic alter ego, Chow Yun Fat, the De Niro to Woo’s Scorsese, would only increase the pull of the title. Similarly, Leslie Cheung who appeared alongside him in the first two A Better Tomorrow films added to the sense of a thread running through Woo’s oeuvre despite the lighter tone. The story follows a typically whimsical view of thievery, with the three central characters, Joe (Chow Yun Fat), Jim (Cheung) and Cherie (Cherie Chung, who also starred alongside Chow in Ringo Lam’s Wild Search) all being partners in crime. In typically simplistic backstory form, Woo paints his usual tale of the melodramatic, the trio having been (or should that be still are?) orphans, raised by a Fagin-like figure Mr Chow (Ken Tsang – another of Woo’s stable of collaborators) who schools them in the ways of deception and generally how to be light fingered little toe-rags. As with all Woo stories, the necessity to paint a figure as entirely unsympathetic and give the audience an obvious target for their hatred is evident. Mr Chow is a brutal teacher, preferring the stick to the carrot method, thereby helping to reinforce the bond between the three young wannabe artful dodgers.

This easy to digest back-story is told via flashbacks and the usual mawkish music, and the more such sequences there are, the more simplistic the characterisation is. Woo has never been one for nuanced characters, and Once a Thief doesn’t differ from his traditionalistic story-telling leanings. Thankfully these moments are brief and the film announces itself with an opening heist. Our triumvirate of budding Raffles are now all grown up and planning a daring raid on a protected moving vehicle that is transporting rare works of art. You have to wonder what those from Chinamake of Western characterisations of themselves, as the opposite, namely Woo depicting Westerners, has always been frightfully awful and this is probably the worst there’s been. What appear to be American action film extras pretending to be European make some scenes unintentionally funnier than the entire ITV comedy schedule (though I admit that isn’t saying much). Joe, Jim and Cherie have a suitably daring plan that includes marking the crate with a touch of subterfuge, distracting the guard van, gaining access to the moving vehicle and exiting in stylish fashion.

The robberies are unremittingly kitsch and if you attempt to actually think during such sequences (never a great idea in any Woo film, and I say that as a fan) you’ll only frustrate yourself. There is little logic in the manner in which our pilfering protagonists go about their daring raids, having one man slide a motorbike at full pelt, roll under the truck and attach himself to the underside looks flash but barring Stevie Wonder being on the security detail it’s unlikely to pan out well. Similarly, when gaining access to the vehicle, Joe picks the lock as the truck bounces along rather than using bolt cutters (it’s a flimsy padlock that, if you put it on your motorbike security chain, your insurance company would likely laugh as your excess headed into the stratosphere). Once inside, just taking the artwork and jumping out the back would be too simple. Much better to have the man beneath the trailer cutting a hole through the floor with a jigsaw (because of course most convoys carrying priceless artworks and protected with armed guards have wooden floors, don’t they?) He will then be handed the booty and disengage himself, successfully managing to simply slide between the back wheels of the truck, rather than getting his backside swept along the road or enduring an unexpected detour through a cactus patch. The icing on the cake is Joe’s departure though, the open doors must have beckoned him to take the easy route and jump to safety, but that wouldn’t be a John Woo film though would it? No, the leader of the troupe of thieves unscrews a light fitting, hoists himself onto the roof, attaches a parachute and flies into the air. You’re not meant to ask what if the wind died down, or stop for a moment and query what the actual speed of a travelling paraglider is. The over-elaborate nature of the robberies (and they get more incredulous) is part of the fun.

The comedy element revolves around the mini love triangle that grows but generally stays in slapstick territory. To his credit, Chow Yun Fat seems to have a bit of a talent for such material – it may be to the dismay of every fanboy with a Killer poster on their walls, but when the laughs are purely performance based, his enthusiasm and willingness to throw himself at the task of making a mockery of himself is almost Chan-like, even if some of the high kicks make it look like he’s about to split his difference!

Chow isn’t a man made for kung-fu, and though this is firmly in the lighter realm of crime flicks, Woo does take the opportunities presented in the story to show us some of his magic. The car sequences may be edited poorly (a collision at a geriatric pace followed by a heavy cut and then a shot of one of the pranged vehicles seemingly ejected from a cannon), but put a gun in the main man’s hand and he’ll always provide an adequate image for the poster, a host of fans dying to watch the picture and a healthy quota of “cool”. Someone recently reminded me of the quote “change is the only constant”, well I disagree, the only constant is Chow Yun Fat. It doesn’t matter whether he’s in a genre defining gangster movie (A Better Tomorrow), or an ill-advised comic book adaptation (Bulletproof Monk), he remains quintessentially cool. Here, in between making a royal tit of himself for comedic effect, there are more than enough scenes where, with trademark slick hair, he is suited like an extra from Miami Vice, chewing on gum or with gun in hand.

The story (yes there is one) introduces a nice guy cop played by Kong Chu (The Killer), but really he doesn’t need to be there. Proceedings take the perfunctory twist and there’s the standard double cross before the final showdown. It’s all tinged with comedy, and Woo to his credit has actually tailored some of the action sequences to include some decent slapstick as well as a more desperate, use anything as a weapon, ingenuity. The marriage of the two styles doesn’t always work, with some brutal moments reducing the levity of the chortle factor but the wheels never fully come off. The strength of the assembled cast of Woo regulars holds the cart together till the end, with Cheung lending weight to the narrative and surprisingly Chow Yun Fat many of the laughs, as well as his bags of charisma. It is an apt departure from the balletic gunplay director, but understandable why his next feature went back to the trademark of his success – gritty, full on bloodshed – with Hard Boiled. Once a Thief remains a glimpse into the comedic leanings of Woo as well as a handy reminder of Chow Yun Fat’s talents beyond simply looking iconic whilst wielding twin Berettas. High camp, kitsch, baddies with the aim of a blind darts player and a distinctly eighties air all combine to make the film strangely compelling in a nostalgic sort of way. And all this without a dove in sight!