Olympus Has Fallen provides everything that the Die Hard series only wishes that it could still deliver. 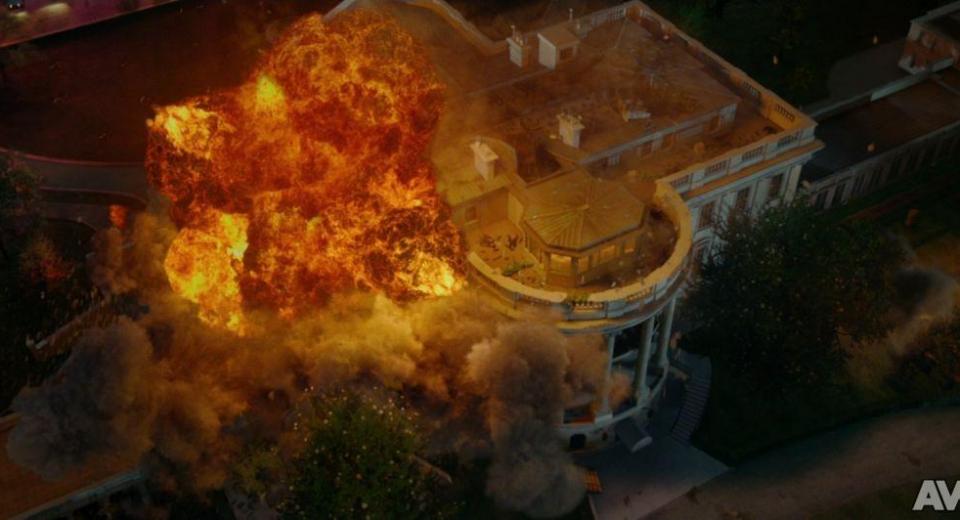 The volatile elder brother of fellow Presidential-palace-assault actioner – Roland Emmerich’s suitably grandstanding, frequently fun but comparatively tame White House Down – Antoine Fuqua’s first-out-of-the-gates actioner was made cheap and played dirty, but easily won at the Box Office, and is certainly the more satisfying of the two. There’s nothing new here – whichever film you see first, the territory has already been covered in 24 – but Gerard Butler’s one-man-army Secret Service agent drives the piece with just enough clenched-teeth wit and sheer brutality, and Fuqua delivers on both the action and violence front, rendering a film that is b-movie material, but A-grade entertainment.

There’s no clear explanation as to why there are two 2013 Die-Hard-in-the-White-House movies – Hollywood plagiarism, in-fighting and one-upmanship all contribute – and there’s no denying that the two have a striking amount in common beyond just the basic premise (inside traitors, ill-advised helicopter assaults, lost children in need of rescuing), but, then again, this stems from the formula established byDie Hard. In fact, Olympus, even more so than White House Down, feels more than just a McClane outing; almost like an Under Siege-style variant: ex-Special Forces hero – expert in weaponry and close-quarters-combat; with a link to cynical US officials watching helplessly from the side-lines – races against time to stab, shoot or kick all the bad guys and save the day. Either way, although both Die-Hards-in-the-White-House are worth watching, Olympus has the edge.

If you haven’t figured out the plot, terrorists lay siege to the White House, taking the President and half his staff hostage in the underground bunker, and making demands to shift US troops from the border with North Korea, which would allow the South to fall. With the Secret Service wiped out, and several dozen armed assailants occupying the White House, it falls upon one man – ex-Presidential detail Secret Service agent and former Special Forces Army Ranger Mike Banning – to kill everybody and save the day.

“With all due respect, I’m the best hope you’ve got.”
The films of Antoine Fuqua are almost all defined by action, even though arguably his best effort – Training Day with an Oscar-winning Denzel Washington – does not quite fit that category. Indeed, whilst he briefly dipped back into corrupt-cops-and-criminals territory withBrooklyn’s Finest, he’s largely become known as something of a go-to guy for entertaining, slick action. The Replacement Killers was one of Chow Yun-Fat’s few decent US-based actioners, Tears of the Sun marked a welcome return-to-form for Bruce Willis, and Shooter delivered up a sniper-rifle-toting Mark Wahlberg, remaining possibly the only true example of Wahlberg succeeding in the action hero mould. Olympus Has Fallen does much the same thing for Gerard Butler (who hasn’t been this effective since his breakthrough in 300) and is probably the best no-frills, no-pretence all-out actioner from either Butler or Fuqua.

There’s nothing new on offer, and, right from the get-go, you know where the story is going but thankfully – and perhaps a little unlike White House Down – it doesn’t take very long to get there. And, once it’s there, it delivers in unreservedly bloody glory. This is old school adult action, through and through, racking up a body count easily into triple figures – which, alone, guaranteed the adult R-rating of the feature, before we even got down to bullet impacts, broken bones and a multitude of f-bombs. Few films can pull off having the hero stab an unarmed, bound man in the head – and then throw off an hilarious quip – but Olympus does it, taking the same risks which only the likes of Dredd are willing to commit to.

“I just ran into one of the terrorists.”
“Is he alive?”
“Ask me a serious question.”
Of course, for some, this may well be off-putting, but I personally miss this kind of action filmmaking. This is classic 80s/90s action territory (the Expendables series wishes it could be this effective), and it’s all too rare these days. Don’t get me wrong, not everything has to be bloody to be satisfying – the Fast & Furious franchise has evolved into a highly entertaining action-heist series, and the largely bloodless fights within are still excellent – but, for films that take a more serious line of action, for example, portraying a siege on America’s most sacred territory to take the Commander-in-Chief himself, there’s more of an innate necessity for high bodycounts, visible deaths, and, frankly, blood. It’s something which even a post-Millennium John McClane has been plagued by – I don’t think he went toe-to-toe with a single villain in the last outing, something unforgivable when you stand it alongside its forebears.

Whilst Olympus doesn’t have the same refinement, script, direction or performances as the genre-defining original from which it spawned, Die Hard, it does share Under Siege ranking in its provision of a highly enjoyable variant – it’ll never be remarkable, but it’ll always remainwatchable. The style is reasonably slick, but knows when to be gritty, with Fuqua’s action direction still very impressive indeed; the script might be frustratingly jingoistic at times, but it also sports some great one-liners that Butler carries off with aplomb; and the performances never amount to the original Willis/Rickman combo, but make up for it in well-placed quantity and reasonable quality.

“Classified? Really? Well right now I believe I have the proverbial need to f**kin' know.”
Sure, Aaron Eckhart feels more like an ageing Secret Service Agent than Presidential material (although Jamie Foxx didn’t exactly rise to the equivalent role in White House Down), and Dylan McDermott struggles with a slightly ineffective and off-kilter ex-Secret Service Agent part, but the rest of the cast bring a welcome weight to the proceedings: Melissa Leo gets put through the wringer as the Secretary of Defence; Angela Bassett remains the consummate professional as the Director of the Secret Service; Robert Forster is well-chosen as the gruff shoot-first-ask-questions-later Army Chief of Staff; and Rick Yune makes for a surprisingly decent villain, not least because he looks convincing in the action department as well; and Pitch Black veterans Radha Mitchell and Cole Hauser offer welcome cameos, as does the underappreciated Ashley Judd. Then there’s Morgan Freeman. Even finally looking his age (he should be grateful, like Samuel L. Jackson, he’s spent about 40 years looking ambiguously and enviably middle-aged), Freeman can still muster a shouty put-down or two to rally his people together.

This is, of course, Butler’s baby, and, at the very least, it’s going to (hopefully) lead to offers of numerous other decent action roles for the guy. You never know, maybe we’ll even get a sequel, although they’ve kind-of hobbled themselves with the movie title (as has White House Down). Still, as stated, this is the best evidence since 300 that the guy can pull off gritty, no-nonsense action. He dispatches opponents with ruthless efficiency – as you would only expect SF operatives to do (again, setting it apart from White House Down’s cop-in-the-wrong-place-at-the-wrong-time scenario) – resorting to SMGs, handguns, knives and unarmed combat in equal measure, but also always having a throwaway quip at the ready. It’s been a while since we’ve had an actioner like this with quite so many good lines.

“Why don't you and I play a game of f**k off. You go first.”
Olympus Has Fallen isn’t an exceptional film. It won’t make any Top 10 lists, or win any Awards. It will probably be dismissed by many as either just another Die Hard rip-off, or ‘that other Die-Hard-in-a-White-House movie’ in a year where we really didn’t need two. Yet, for those who still like to kick back to a decent actioner once in a while; who can appreciate the time and the place for this sort of thing in amidst all the high-brow fare that every critic more readily raves about. Unfortunately these days adult action movies are largely relegated to the DTV arena – and are often unwatchable as a result – with the majority of mainstream equivalents rendered ineffective with their PG-13 restrictions. Olympus Has Fallen has no such ambitions, remaining old school through and through, and delivering thoroughly satisfying action and thrills from start to finish. For what it is, it’s one of the best of its kind in years, perhaps even decades. So if you like action, don’t miss out.