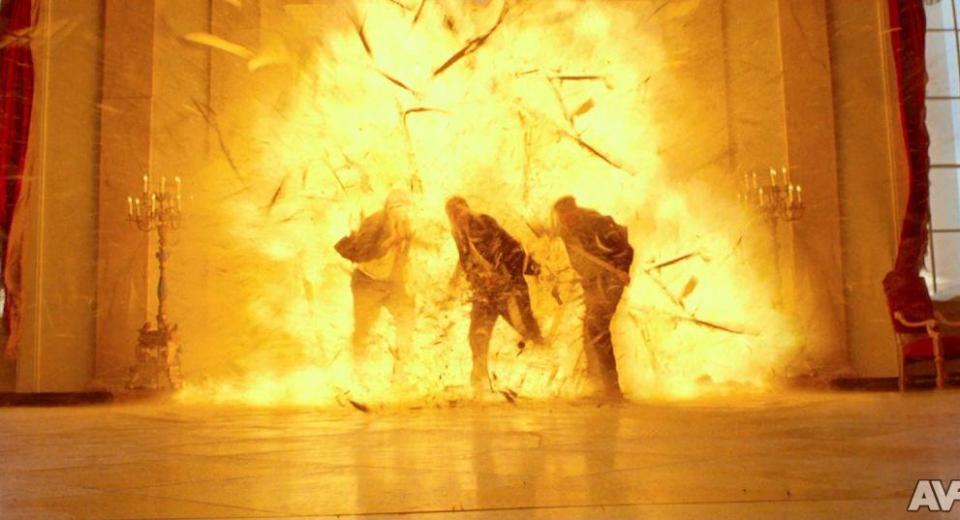 Olympus Has Fallen’s UK Region B-locked release doesn’t attempt to correct any of the issues which arose on its US debut, providing a solid, largely good 1080p High Definition video presentation in the movie’s original theatrical aspect ratio of 2.4:1 widescreen, but dropping the ball when it comes to both crush and noise, leaving the image far from what you would expect from a newly-minted feature like this. Detail is still impressive, particularly when it comes to fine objects, facial observation, clothing weaves and background textures; softness is never an issue, and edge enhancement does not appear to be present. DNR is also far from an issue. The colour scheme is where the problems start to creep in, with an overall dark tone that does allow for some brighter primaries to encroach, but lacks somewhat in the skin tone department and, more importantly, in the shadow detail and black crush area. Noise also fluctuates – stable for the most part, but a couple of scenes will make you sit up and take notice. Overall it’s a good video presentation which falls short of great because of these frustrating niggles which are, unfortunately, impossible to ignore.

On the aural front things are far more impressive, and much more clear-cut. The accompanying DTS-HD Master Audio 5.1 track provides for a boisterous, punchy listen, which immerses you in the often bombastic proceedings right from the get-go. Dialogue comes across clearly and coherently throughout, dominating the frontal array wherever necessary. Effects are diverse, but the highlights include thundering helicopter-mounted guns and plenty of assault rifle fire, with no sense of restraint whatsoever, especially in the explosives department. Bullets whizz around you, and hit with discernible impact; dynamics and surround usage is noteworthy, and the LFE channel has a fair amount to say too. The film’s numerous action sequence positively engulf you and turn your living room into a White House lawn warzone. The score picks up in all the right places, balancing the calm-before-the-storm moments against the more rousing action pieces, also bringing the LFE channel into play. Overall it’s a welcome, impressive and thoroughly demo-worthy production which only just falls short of a perfect 10 rating.

On the extras front we’re missing anything particularly special – there’s no PiP, nor even a Commentary and the clutch of Featurettes do not quite equate to a comprehensive Documentary – but it’s far from a bare-bones release, and it matches up to the US counterpart.

Basically we get 5 Featurettes, each with a fair amount of cast and crew input, as well as some nice behind-the-scenes footage and, in the case of the effects-driven offerings, lots of scene breakdowns. The Making of Olympus Has Fallen is the biggest of the lot, and the only one which is more than 10 minutes long, and we get to hear about the premise, expanding the plot, what Fuqua brought to the table, and which hints at the level of effects that were required to bring the movie to life; The Epic Ensemble spends half the time looking at the ensemble cast; andDeconstructing the Black Hawk Sequence, Ground Combat: Fighting the Terrorists and Creating the Action: The VFX and Design, focus on the action sequences, fight choreography, gunplay, and effects. The disc is rounded off by a short Gag Reel and a number of Previews.

Whilst Olympus doesn’t have the same refinement, script, direction or performances as the genre-defining original from which it spawned, Die Hard, it does share Under Siege ranking in its provision of a highly enjoyable variant – it’ll never be remarkable, but it’ll always remain watchable. The style is reasonably slick, but knows when to be gritty, with Fuqua’s action direction still very impressive indeed; the script might be frustratingly jingoistic at times, but it also sports some great one-liners that Butler carries off with aplomb; and the performances are far from exceptional, but make up for noteworthy quality with ensemble quantity.

Olympus Has Fallen isn’t an ambitious film, but it is an exceptionally effective actioner, remaining unabashedly violent in a painfully tame age of PG-13 restrictions. Indeed, with no pretentions about being anything more than it is, it’s one of the best no-frills actioners in years, perhaps even decades.

This Exclusive UK Region B-locked Blu-ray, aside from sporting a nice little fan-chosen (though not fan-designed) Steelbook case, is identical to both the Standard UK release and the US counterpart, and has the same difficulties – fantastic audio brought down by disappointing video, and limited extras. Still, you surely came here for the action, and nothing on this disc will change how you enjoy that. Highly recommended for anybody who likes their Die-Hard-On-A... variants, and who enjoys action movies in general.