"My advice? Save the last bullet for yourself. Because if you don't, I'm gonna stick my knife through your brain." 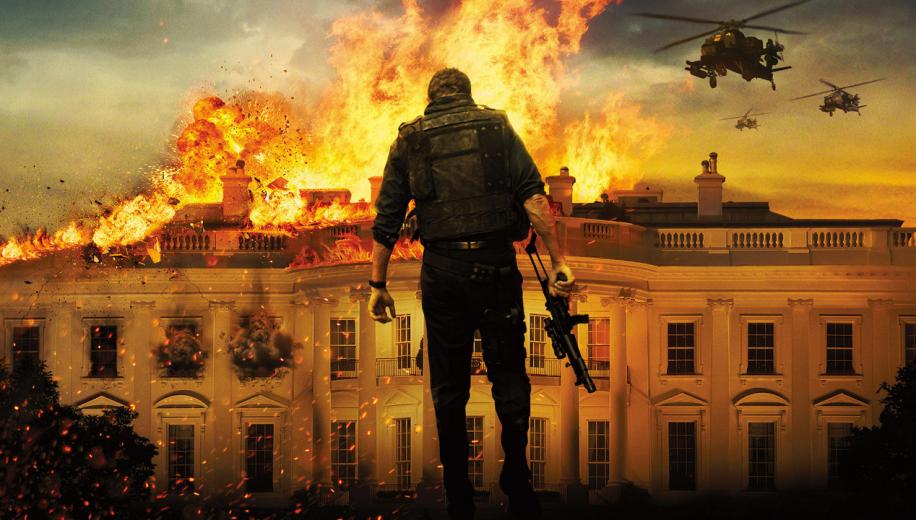 The unexpectedly good first film in the series debuts on 4K as part of a German trilogy release, boasting Dolby Vision and a much cleaner image than the Blu-ray, unfortunately thanks to a very liberal application of DNR.

The volatile elder brother of fellow Presidential-palace-assault actioner – Roland Emmerich’s suitably grandstanding, frequently fun but comparatively tame White House Down – Antoine Fuqua’s first-out-of-the-gates actioner was made cheap and played dirty, but easily won at the Box Office, and is certainly the more satisfying of the two. There’s nothing new here – whichever film you see first, the territory has already been covered in 24 – but Gerard Butler’s one-man-army Secret Service agent drives the piece with just enough clenched-teeth wit and sheer brutality, and Fuqua delivers on both the action and violence front, rendering a film that is B-movie material, but A-grade entertainment.

There’s no clear explanation as to why there were two 2013 Die-Hard-in-the-White-House movies – Hollywood plagiarism, in-fighting and one-upmanship likely all contribute – and there’s no denying that the two have a striking amount in common beyond just the basic premise (inside traitors, ill-advised helicopter assaults, lost children in need of rescuing), but, then again, this stems from the formula established by Die Hard.

Refreshingly old school through and through

In fact, Olympus, even more so than White House Down, feels more than just a traditional McClane outing; almost like an Under Siege-style variant: ex-Special Forces hero – expert in weaponry and close-quarters-combat; with a link to cynical US officials watching helplessly from the side-lines – races against time to stab, shoot or kick all the bad guys and save the day.

Whilst it doesn’t have the same refinement, script, direction or performances as the genre-defining original from which it spawned, Die Hard, it does share Under Siege ranking in its provision of a highly enjoyable variant – it’ll never be remarkable, but it’ll always remain watchable. The style is reasonably slick, but knows when to be gritty, with Fuqua’s action direction still very impressive indeed; the script might be frustratingly jingoistic at times, but it also sports some great one-liners that Butler carries off with aplomb; and the performances never amount to the original Willis/Rickman combo, but make up for it in well-placed quantity and reasonable quality. With no ambitions to entice the PG-13 crowd, it's a better effort than the Die Hard series itself was able to deliver the last time out of the gate, remaining refreshingly old school through and through, and delivering seriously satisfying action and thrills from start to finish.

Olympus Has Fallen makes its 4K bow in Germany as part of a "Fallen" Trilogy boxset with the two sequels, courtesy of Leonine Films, with no imminent UK (or US) 4K release on the horizon, and it feels like a bit of a Concorde / Iron Man Trilogy situation, with a half-hearted attempt at launching a title in 4K - and with Dolby Vision too - but not actually employing any kind of quality control on the end product. This Ultra HD Blu-ray release is a prime example of everything that could go wrong with a 4K release, overplaying its blacks with Netflix levels of DV implementation, and absolutely destroying image integrity with heavy-handed DNR and subsequent sharpening. At least it looks clean, but at what cost?

Olympus Has Fallen has never looked 'good', with a Blu-ray release rife with crush, noise and variable grain issues which left it often compared to the dire Expendables 2 disc, also from Lionsgate. Unfortunately, it's not Lionsgate dealing with this 4K release (although after some of their work on the Expendables 4K discs, that's a couched 'unfortunately'), and it feels like a very unprofessional end result, taking the tools afforded by the 4K format and wielding them in an extremely heavy-handed fashion, presumably in part to contend with some troublesome source material, but nonetheless producing dire results.

For starters, because Olympus was quite a grainy, gritty, noisy production, it's required some DNR implementation. This is not an unreasonable decision in and of itself, as it was the only way to clean up the image to any degree of stability, but DNR has clearly gone way too far, yielding an extremely clean image, which was presumably a little soft around the edges, and which therefore required some rectification in the form of sharpening. If this was the early days of Blu-ray, it may have been remarked upon but forgiven, however, we're a decade past the point where this kind of wayward digital manipulation should ever pass quality approval, but here we are, and the result is occasionally pretty ugly.

Really squinting, you're going to get a few - probably count them on your fingers - shots where the image looks pretty good. Not outstanding, but good enough that, if consistent, it would have made for what would be regarded as a 'modest' upgrade. However, these shots are few and far between, and the majority is the kind of image that a less generous viewer prone to a degree of hyperbole would suggest is 'no better than a DVD'. Of course, it is far better than a DVD, and probably more often than not a step up from the distinctly average Blu-ray, but it's still not forgivable, and unfortunately it's only the start of the problems.

Surely HDR would save the day? And Dolby Vision too? Well, no, if anything the Dolby Vision implementation is as heavy-handed as the DNR, borderline Netflix in the approach, utterly drowning out several darker scenes to the point where you simply can't make out what is going on (the night helicopter assault is a prime example). There's deep blacks, and then there's a bottomless pit of darkness, and Olympus more often falls into the latter. Conversely, DV/HDR highlights have been dialled up to 11, so you know when those flares go off, you're going to have seared retinas. It's not utterly ugly, but it's pretty garish and, again, very heavy-handed - all very Concorde / Iron Man Trilogy, for those who made the unfortunate mistake of jumping on those early 4K MCU releases before Marvel/Disney did them properly. Really, the only hope is that Lionsgate will release these titles themselves, and do a professional job. Hell, even semi-professional would be leagues ahead of this release, which has to be a contender for one of the worst 4K presentations in the history of the format.

Olympus Has Fallen's 4K Blu-ray also bow drops the ball on the aural front with no sign of a 3D object-based immersive audio track, of either the Dolby Atmos or increasingly rare DTS:X variety, which would have been a choice option for such a bombastic action-packed affair.

There's no denying that this is a demo track

On the plus side, the original DTS-HD Master Audio 5.1 track was largely excellent, and hard to fault in and of itself, promoting clear and coherent dialogue throughout, and delivering a strong - albeit patriotically generic - score in the background, but thrilling mostly with some excellent effects coverage raining down thunderous fury when the assault kicks off, and pretty-much not let off with its explosions, heavy machine guns and artillery until the credits roll. It earns a punitive mark down on the score because, coupled with the poor video, there really is nothing here - technically - to suggest an upgrade on any front, but there's no denying that this is still a demo track.
﻿

Leonine don't bother to do anything on the extras front either, neither promoting anything new, nor even bothering to port the old extras onto the 4K disc itself.

Leonine don't bother to do anything on the extras front either

The accompanying Blu-ray is likely identical to the original Blu-ray release, affording the same interviews, B-roll footage and making-of featurettes.

Olympus Has Fallen was considerably better than it had any right to be, spawning an unlikely trilogy and rumours of a further trilogy in the works. It's one of the better modern riffs on Die Hard, with Butler on fine line-quipping, bad-guy-gutting form.

Sooner or later, Lionsgate will release these films on the format and hopefully do a semi-professional job too

Although the latest entry, Angel Has Fallen, has already earned a 4K release, the first two movies in the trilogy haven't graced the format until now, coming in a trilogy box set from Leonine in Germany. The set is a very mixed bag, at best, and Olympus itself has nothing even remotely approaching an 'upgrade' on either the video or audio front. Based on that alone the trilogy is probably not worth picking up unless you simply have to have London in 4K (a better upgrade), it's a hefty price to pay when you know that, sooner or later, Lionsgate will release these films on the format and will hopefully do a semi-professional job too.