Instantly recognisable and a joy to watch 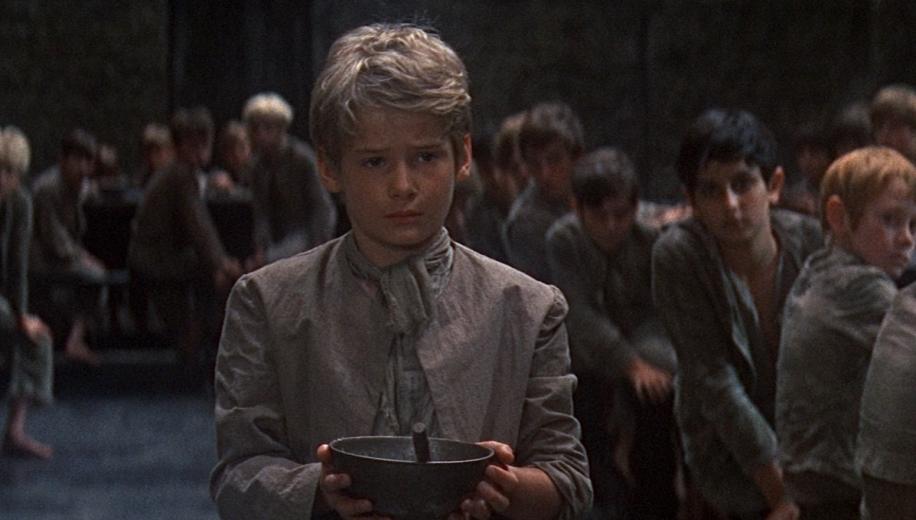 Shut up and drink your gin

Oliver! the 1968 musical from celebrated director Carol Reed was a ‘free adaption’ from Charles Dickens’ novel Oliver Twist; what this means in practice is that it had more to do with the stage play than it had the source literature. Dickens was a master of character and plot, interweaving story threads between characters as they meet, pass, and meet again in what in script form looks like contrivance, but is in novel form coincidence. The translation to a filmic format, much as the stage play had done, dropped or amalgamated many characters and situations to form a liner narrative, and Oliver! is all the better for it (indeed, the film deviated even further from its source in this regard at the end).

Of course, the film is probably best known for its score, the musical numbers have become as much a part of our conscience as the book. Who among us can say they do not know, “Food, Glorious Food”, “You’ve Got to Pick a Pocket or Two”, “Oom-pah Pah” or “Consider Yourself”? Indeed, you may not know the titles but I bet “I'd Do Anything”, “Who Will Buy?”, and “As Long As He Needs Me” are equally as familiar.

But the score is only part of what makes Oliver! special. The acting talent involved really sells the film. Ron Moody as Fagin was a master at the part, essentially reprising his role form the play, Shani Wallis as Nancy is delightful as the mother figure wanting nothing to do but protect Oliver and see him straight, Jack Wild as The Artful Dodger is wonderful, a character who is easily persuadable, while the scene stealing, centre of the film, the awesome Oliver Reed as Bill Sykes is absolutely loathsome. Director Ken Russell was famous for stating that Oliver Reed only had three acting styles, but if you knew what you wanted, he was utterly dependable – the Sykes character is pure Reed at his most charismatic and evil, essentially he was that dependable linchpin on which the production hung. Unlike Mark Lester as the titular character, who was kind of lost and out of his depth – apt for the character of course, and a decent enough foil for Reed, but not even singing his own songs, in a musical... come on!

Made at a time when sets were vast, extras were plentiful and productions were huge, Oliver! was all this and more. Crane shots of dancing crowds, epic sets with sunsets, the whole of Grosvenor Square meticulously recreated, this type of film will simply never be made again. It is shot through with wit and charm, instantly recognisable and a joy to watch. “Please sir, I want some more”.

Oliver! was shot on 35mm film and has benefited from a full 4K restoration from the original camera negative, producing a new 4K DI from which it appears this UHD is sourced.

Some pictures have to be seen to be believed, and Oliver! has such a picture. Everything combines to make a magnificent whole, a simply stunning image.

Detail is amazing from close-ups such as skin texture and ground-in grime on faces, fingernails etc, clothing weaves, or damage, or buttons to medium shots such as wood grain in barrels, fat in meat, legible writing in posters, grass and leaves. Perhaps best of all are the distance shots, best exemplified by the crane shots of the dancers, specifically during “Be Back Soon” where the facial features of the urchins are clearly visible, or “Consider Yourself”, the climactic dance with the enormous crowd, and “Who Will Buy?” with its myriad of patrons and their various items, roses, strawberries etc. – outstanding.

The WCG and HDR add significant punch to the colouring, all the primaries are gorgeous; again check out “Who Will Buy?” for some simply breath-taking colours, the pinks, blues and yellows of the costumes, the greens of the grass, the red of the roses, strawberries and the marching band, simply staggering.

Add to this a black level that is absolute, with depth and shadows, and a white scale the brings out highlights, such as moisture on stone, candles, fire, sheen and you have a superb image that is far superior than the sum of its parts.

There are no digital issues, and the original source is clean and maintains a decent but light film of grain to remind you of the organic nature of the photographic process. Wonderful!

A musical needs a good soundtrack, and Oliver! has been given a doozy! The Dolby Atmos surround track opens up the surround field like never before, with multi-layering to give depth and scope to the musical numbers. Each of the songs has a clear sense of layering in 3D space, so that while the stereo separation is wide, revealing expanse, the vertical layering gives depth and height; so that instruments, percussion and vocals have their own level. This makes the music sing and gives scale to the track.

Other aspects, such as ambience and dialogue are well maintained, with their own separation and directionality. Bass is, understandably limited, LF effects even more so, but bass drums and the cogs of the workhouse do have some significant heft, as well as scale. Perhaps best exemplified by “Who Will Buy?”, the layering in the track is magnificent with dance moves / footfalls, water, crowds and individual vocal elements, as well as the instruments all existing in 3D space, it is simply blissful.

There are no extras on the UHD, everything is on the included Blu-ray, which we have, unfortunately, not seen, the list below is from published sources.

The Locations of Oliver!

Hardback Book – Housing all discs with writings, essays and restoration note on all films.

While the 1968 film Oliver! might have more in common with the stage play of the same name than the source novel, Oliver Twist, it remains a charming, and toe-tappingly good musical extravaganza, that boasts top Academy Award performances, and a wit and charm that modern films can seldom muster. The songs are so well known that they sit alongside the film itself in popularity, a simply glorious feast for the eyes and ears.

Oliver! is currently only available as part of the Columbia Classics Collection Volume II.

The native 4K image is stunning: breath-taking detail with rich, vivid colouring and deep blacks with even whiter highlights, makes for one of the pictures of the year, while the Dolby Atmos surround track gives a hitherto unknown depth and height to the musical numbers which are all encompassing. There is even room for some new extras to boot. Wonderful!