Of Gods and Men Movie Review 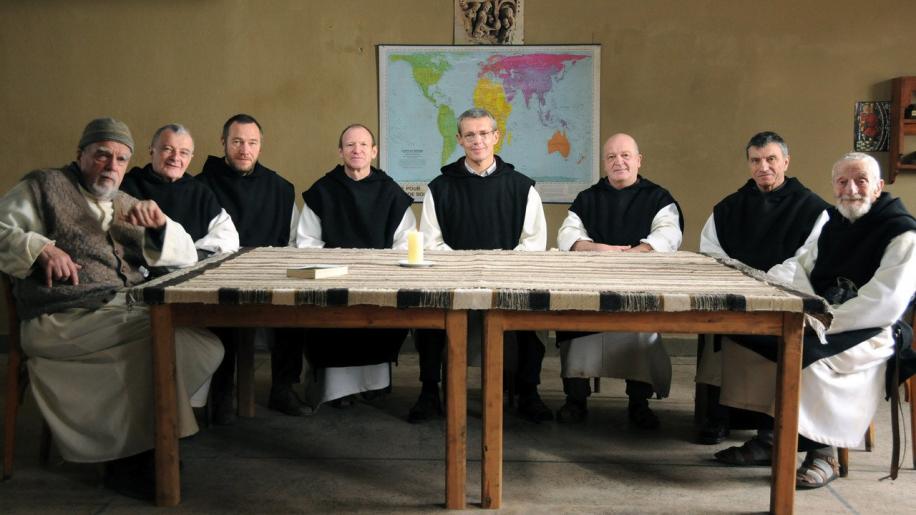 Normally I consider trailers slapped in front of a movie on a Blu-ray disc to be an obstruction that needs to be overcome before I can get to watch the main feature, so I happily skip past them. Of late however, I’ve started to pay attention to the trailers on Sony Pictures Classics releases from the good ole U.S. of A as they’ve yielded quite a few enjoyable movies that I might otherwise never have seen. Within the last few months there’s been ‘The Illusionist’, ‘Tamara Drewe’, ‘Barney’s Version’ and ‘Made in Dagenham’ – all generally smaller films, some with an international flavour and some more parochial UK product. Most recently, I was fortunate enough to have my interest piqued by the French film ‘Of Gods and Men’ which was the winner of the Grand Prix at the 2010 Cannes Film Festival. However, the fact that it won at Cannes was almost a barrier to my viewing of it as was the fact that it was not an English language film because I doubted if my schoolboy French would be up to the task. I’m not a great fan of watching subtitled movies, but the trailer had raised my hopes that it would be a good film so I was willing to give it a go – fully expecting to lose interest after 20 minutes. I’m now really glad that I overcame my prejudices and barriers as ‘Of Gods and Men’ is a very well told story and, in my opinion, totally worthy of its win at Cannes or in any other competition.

Inspired by a true story, it’s loosely based on the life of the Trappist monks of Tibehirine in Algeria who lived in harmony with their Muslim neighbours for many years. Algeria had become a French colony back in the 1800’s and, in order to show the locals something of French culture and religion, the monks were invited to set up a monastery in the Atlas mountain region. The monks became accepted into the community, helping where they could and in return receiving help – a symbiotic relationship, to use a big word. During the Algerian Civil war, around 1996, tension mounted when a group of foreign workers were massacred by an Islamic fundamentalist group – causing fear to sweep through the region. The army offered the monks protection, but they refused. The dilemma they had to face was whether they should leave, effectively deserting the people of the local community. Despite the growing menace in their midst, they slowly realised that they had no choice but to stay – come what may.

Clearly, this is a much more cerebral film than much of the product putting bums on seats in cinemas so those seeking explosive action should look elsewhere. There are no big Hollywood stars involved but most of us will recognize Lambert Wilson (‘The Matrix Reloaded’) and classical actor Michael Lonsdale (who played Bond villain Hugo Drax in ‘Moonraker’) as two of the main characters. The film is very gently unspooled with excellent acting from the whole cast.

We’re introduced to the monks as they go about their daily toil and as they take part in worship. We get to know them and we see their involvement with their neighbours in the small village surrounding the monastery. Brother Luc (Michael Lonsdale) runs a health ‘clinic’ within the monastery, dispensing medication and treating up to 150 impoverished villagers each day. He also dispenses some sage advice to those who seek it in a very low key manner. Although the monks are of the Christian faith they are also welcomed at Islamic ceremonies, such is the trust and friendship that is shared with them. As jobs within Algeria become scarce, there is resentment towards the French and indeed anyone from another country who does a job that could easily be done by an Algerian. This feeling grows and news reaches the monks that a group of foreign workers has been killed by an Islamic extremist group. This causes them great concern and the subject of what they should do is raised, causing much thought and discussion. These are men of peace who feel part of the local community but they cannot ignore the fact that they too are foreigners and may become targets for the militant fundamentalists.

Everyday life continues for a while until the monks’ celebration of Christmas is rudely interrupted when the monastery is visited late at night by gun wielding ‘terrorists’. The leader demands money and wants Brother Luc to go with them to treat an injured man some distance away. The elected leader of the group of monks, Christian (Lambert Wilson), stands his ground and refuses to allow weapons in the monastery so takes the conversation outside the gates, much to the surprise of Ali Fayattia (Farid Larbi) the leader of the armed men. With Kalashnikovs pointed at him, he tells them they can’t have any money as the monastery has none and Brother Luc cannot travel with them as he is an asthmatic. This guy had guts! He does say that the Doc will treat anyone who visits him at the monastery. Somewhat astonished, the fundamentalist group leave, but not before Brother Christian has received an apology from their leader for interrupting their celebration of the birth of Christ. An understanding is seen in the eyes of the terrorist leader and the monks have earned their respect. From then on they unknowingly benefit from the protection of Fayattia who ensures that they are left alone.

In one scene, Brother Luc has fallen asleep wearing his spectacles. Brother Christian, very gently removes them taking great care not to awake his tired friend and very carefully puts them into his spectacle case then lays them on top of the book he was reading in a safe place. This is a very touching scene, played with a delicate kindness.

As life goes on, Christian is taken one day by the Algerian army to identify the body of Fayattia who has been captured and killed. From then on the monks know they are in deadly danger and the argument over whether they should leave or not arises again. This time, at a meeting, each of the monks presents their own feelings on the matter and each in turn opts to stay with no protection from either the army or the terrorists. They stage their own version of ‘The Last Supper’ as they sit around a table with a glass of wine listening to a recording of ‘Swan Lake’. As the camera slowly pans from face to face, we see their shared love. Some have joy in their eyes, some have tears. Then, one day they are visited by another group of militant extremists ...

To say more would be to deny an audience the impact of the film. It is a very moving piece that focuses on fraternity or brotherly love, not only among the monks but between the villagers and the monastery. The film avoids becoming a rousing tale of heroism in the traditional style. It uses a prayer written by Brother Christian over the final shots whose words hit home more powerfully than any action scene. It is underplayed so beautifully that there is a ‘matter of fact’ feel to it. It does not attempt to tug at the heartstrings, nor is it sentimental. It presents the facts and leaves it up to the intelligence of the audience to handle their own feelings.

The cinematography of Caroline Champetier brings out the beauty of the countryside and the delicately lit interiors of the monastery communicate the feeling of inner peace found in places of worship. Written and directed by Xavier Beauvois, the whole film is handled with a great deal of sensitivity and it ends with an audience in total reverential silence.