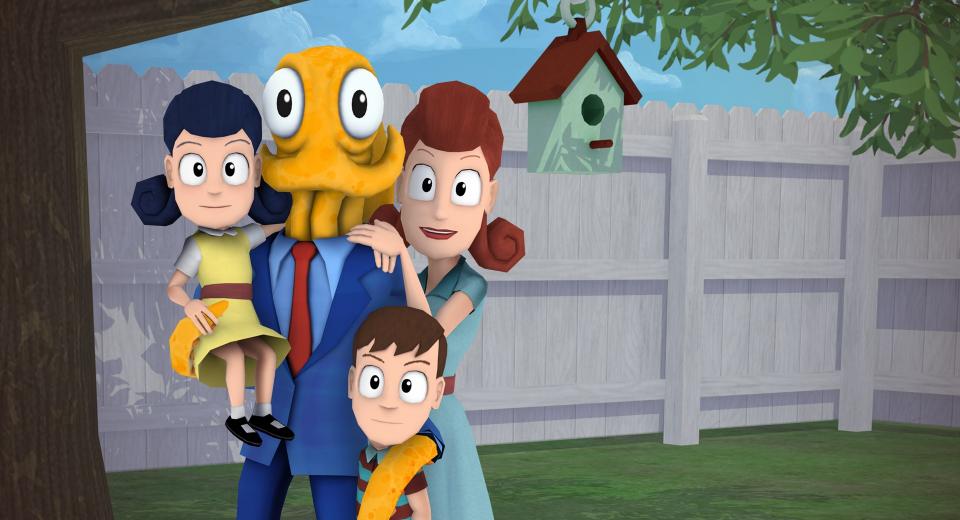 Comedy comes in many forms. From the ever topical Jon Stewart to the quintessentially British Morecambe and Wise. From the foulmouthed South Park through to the broader appeal of six chums in a coffee shop and Friends. Myself, I’m partial to a good pun, but if you’re after something that will get every generation laughing together then look no further than good old slapstick.

A physical joke appeals to everyone. That’s why a politician falling off a stage or slipping on an icy pavement is guaranteed to make it onto the news; there’s something intrinsically funny about someone falling over. Especially if they’re in a position of power. Doubly so if it involved a man carrying a ladder. The students of Chicago’s DePaul University appreciated this when they created Octodad. They realised that at their core every human being will find a bumbling idiot funny, especially if that idiot is actually a sea creature in disguise. As a setup, an octopus donning a suit and pretending to be Average Joe may sound as though it relies on its absurdity for laughs, but given that Octodad is as uncoordinated as a new born giraffe then we just have to sit back and wait for the fun to begin.

Indeed, your first few minutes at the helm of our cephalopod parent will prove highly erratic. Through a combination of mashing buttons and twirling sticks you activate your many legs, each flying around in 3D space, despite better judgement desperately hinting that there aren’t enough inputs on the joypad to achieve such a feat. You totter around, limbs wildly spinning, lurching in all directions, bidding to seize even a semblance of control. Oddly, throughout, your body floats serenely along at the centre of this blur of movement as though a balloon being tugged along by a mischievous toddler. This serves only to make your actions seem even more chaotic.
I can only guess this is how JCB drivers must feel on their first day of the job.
What tops this opening scene off is that it takes place in a church. On your wedding day. Hunting for a morning suit, tables of gifts go flying and flower arrangements are scattered to the floor, complete with appropriate stock Foley effects and slip whistles.

Soon enough the controls are wrestled into submission. Left and right triggers activate different limbs whilst the sticks move them in horizontal and vertical planes respectively. A strange dislocation of the brain and a willingness to ignore any usual comprehension of spatial awareness is needed to achieve even simple feats. Steering an octopus isn’t too tricky but once his destination has been reached each motion is met with either a pause, figuring out where you are and where you want to be in the third-dimension, or a quick flail as caution is thrown to the wind. I can only guess this is how JCB drivers must feel on their first day of the job. Where this works best is when Octodad finds himself in everyday, normal situations. The trip to the supermarket being particularly notable, seeing him stagger down the aisles destroying displays as he picks out his weekly shop. Equally seeing him potter around the house getting his kids – don’t ask – their breakfast before attempting some gardening was great. It puts a touch of the bizarre in a familiar situation and lets the humour and the challenge come from carrying out ordinary tasks with an extraordinary “person”.

Though the controls are by no means intended for a novice, they are at least forgiving. There’s a generous snap to picking up and placing objects, offering a healthy leeway that nips potential frustration in the bud. Similarly, although too much clumsy behaviour will supposedly see our fish out of water unmasked as a fraud and send you back to the previous checkpoint, it is enforced to only a token degree and won’t hinder the blundering.

A fish out of water

Unfortunately this laid back philosophy doesn’t last too long. Whisked off to ever increasingly contrived situations the game begins to lose its way. Back stories are added where there needn’t be any and in doing so they introduce contrived mechanics that feel completely at odds with the spirit of the game. From simply bumbling across rooms suddenly focus turns to scaling an infuriating climbing frame with collapsing bridges and a camera that apparently holds a grudge. With a better paced difficulty curve this could have been the crowning glory, the nod that your numerous arms have been tamed. Instead it rears up and demands you climb a rope ladder that is permanently obscured from view.

Stealth sections, that are neither fun nor rewarding given the imprecise controls, also crop up with unwelcome frequency in the latter half of the adventure. None are excessively long but overly generous lines of sight and extremely narrow corridors of safety make them seem to last an age. Be prepared to see the same checkpoint over and over again as you try and force your way through fishing vessels and restaurants in sections that, even after completing them, I feel I squeezed through more by luck than judgement.

It’s possibly a sign that the developers felt the comedic handling and its self-imposed difficulty could not sustain Dadliest Catch until the credits, despite being only a couple of hours long. The shame is that there are portions where just offering more to do would suffice. Around the midpoint you’ll be tasked with winning prizes for your wife from a sideshow by lobbing basketballs, operating claw machines, and playing a host of other silly distractions. These provided the perfect excuse, testing how well you’ve learned to coordinate Octodad’s limbs. In any other game throwing a ball through a hoop would be a single button but here it’s a herculean feat that seems to have been dismissed too lightly.

I guess with being a sequel the former-students were wanting to create a more adventurous outing, stretching the safe confines of the experimental original. Sadly in doing so they moved away from a humorous romp into genres that are barely tolerated even with precision controls let alone those where your lead character slides around as though on ice. It doesn’t sit well.

Just as the key to comedy is timing, the key to a sequel is not only playing to the original’s strengths but building on them. In this case, more would have been perfectly fine. More objects in the world to play the fool with, more curious situations to pretend to be normal in, and generally just more bumbling around like Norman Wisdom in his heyday. The deeper into Dadliest Catch the further it strays from this principle and after a good start Octodad stumbles in its second act.