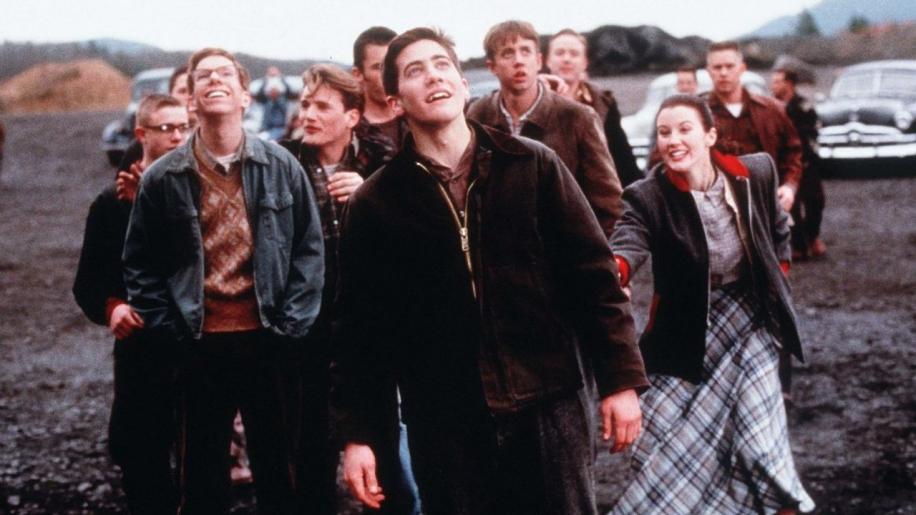 
The year is 1957 and Russia have launched their Sputnik satellite, beginning the space race in earnest. This is a world away from the mining town of Coalwood, West Virginia, where coal mining is a way of life - and death - for most of the town's menfolk. But high school student Homer Hickham (Jake Gyllenhaal) is inspired by Sputnik flying through that October sky to create his own rocket program and break away from the pull of the mine. Homer and his friends find support and resentment in equal measure; while their teacher Miss Riley (Laura Dern) is wholly supportive, the school principal is not, and neither is Homer's father John (Chris Cooper), head engineer of the mine.

October Sky (adapted from Homer Hickham's book 'Rocket Boys') has so much potential for cheesiness I was cringing before I'd even spun it. But right from the opening credits - weary miners intercut with townsfolk listening in to the radio about Sputnik - it's clear that Joe Johnston's film wants to avoid cliché and sentimentality. The characters, especially Hickham and his friends, are acutely aware of the future that awaits the town's young men down the mine, which gives their struggle (and other events in the film) a poignancy that doesn't need to be bolstered by tacky 'cry now' music and fluttering American flags.

The actors all do a good job, with Gyllenhaal giving an earnest performance that's a world away from his annoyingly dopey turn in Donnie Darko. Chris Cooper delivers his stock 'angry bloke' persona, although thanks to the writing there's still depth and believability to the character. Laura Dern is good as Miss Riley, holding the histrionics in check even when the character learns she has a debilitating disease. Homer's friends are also a likeable bunch, played by recognisable faces like Chris Owen (American Pie), Chad Lindberg (Fast and the Furious) and William Lee Scott (Pearl Harbor).

The most annoying thing about the film is probably Mark Isham's music score, which is a little too quirky for my tastes (lots of jaunty strings) although the scattering of period rock and roll songs helps to soothe this minor complaint. That aside, the film is very good because everyone involved seemingly decided to let this real-life story tell itself, with only a few tweaks for dramatic license. Every time I thought the music would swell up and everyone would say 'God Bless America', the filmmakers restrained themselves and I thanked the movie gods that Disney didn't get their hands on October Sky.