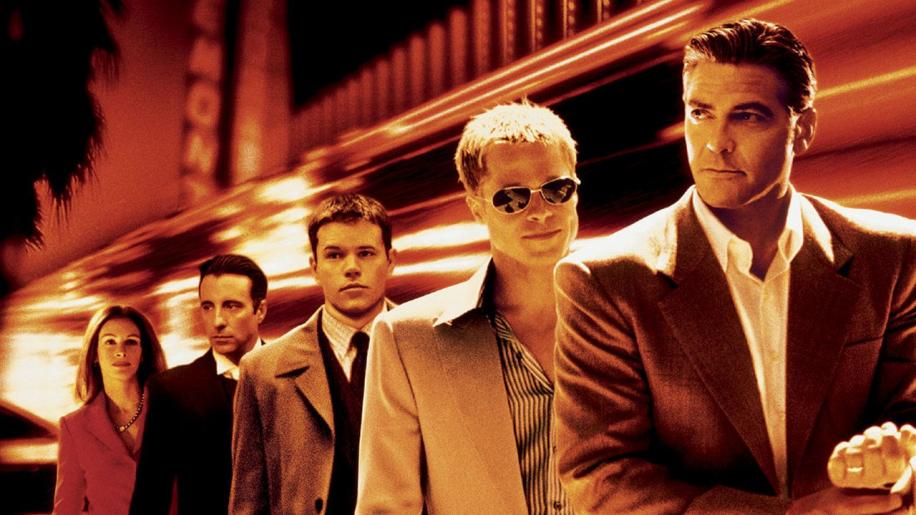 Having just reviewed one of the most redundant remakes of all time, it was a pleasure to return to what I regard as one of the minority of remakes that is actually superior to the original - Ocean's Eleven. Don't get me wrong, I have the utmost respect for the 60s Rat Pack - Frank Sinatra, Dean Martin et al. - but the first Ocean's Eleven movie was extremely lightweight. In 2001, eclectic Director Steven Soderbergh collaborated with his favourite actor, George Clooney, and a bunch of Clooney's pals, to make one of the coolest movies of all time.

Danny Ocean has just been released from prison on parole. A career thief, he has to watch his every move, and is not even allowed to leave the state, but what is the first thing that he does? Put together a crew and go down to Vegas, with a view to taking down not one, but three of the biggest casinos, simultaneously. The plan is preposterous, but with the pay-off being upwards of $150 Million, it seems worth the risk. And for Danny, the job is personal - all three casinos are run by vicious mob manager Terry Benedict, who also happens to be dating Danny's ex-wife. And that's just where the fun begins.

Now I still haven't seen the third instalment, but I think that the general consensus is that neither sequel quite lives up to the standard set by the first part. And I can see why this is such a task, right from the credits sequence running across the water to the Vegas city lights, up until the final scene, this movie simply oozes style. We are not talking 300 here either, this is not a movie about style over substance, it's an ergonomic story, coupled with a razor-sharp script and brought to life by some of the coolest actors alive.

Clooney's the leader of the pack, and he has always been totally at home in this role. I like the way in which they downplay his leadership, make it seem like he's only the boss by default, and this only elevates his part as Danny Ocean. Of late, he has taken some meaty, choice roles, whether it be in the decent remake of Solaris (another Soderbergh collaboration) or in the haunting Syriana, or the compelling Michael Clayton, and they are all diverse parts to play that show some real range to this master of cool. As Danny (the part played by King of Cool Frank Sinatra in the original), Clooney just has to be Clooney, and for all his more striking roles, it is still good to see him return to this every now and again. It's almost ditto for Brad Pitt (playing the equivalent to Dean Martin's role) who is his typical stylish, slightly wacky but ludicrously cool self. Sure he pulls no punches in Fight Club, play crazy mon-key in Twelve Monkeys or brood masterfully as the complex Jesse James, but he too just appears to be playing himself in Ocean's Eleven, and it is also nice to see.

The other nine include Jason Bourne himself - Matt Damon, Transformers' Bernie Mac, Jesse James' Casey Affleck, Boiler Room's Scott Caan, Crash's Don Cheadle and The Long Goodbye's Elliot Gould. Andy Garcia plays it one-note as tough-suit Terry Benedict and Julia Roberts smirks and smiles her way through as the women being fought over, Tess, but the only really noteworthy characters are the comedic duo played by Affleck and Caan, whose rivalry and banter is thoroughly engaging. Also, for future reference, Don Cheadle should not get franchised into a role that requires him to be cockney, it just does not work. Still, despite the fact that none of the other roles are particularly memorable, they all come together to make a great team, and a great movie.

It is actually quite difficult to get just the right mix when it comes to making a cool movie. The script has to be smart, but not cocky, the characters suave but not pretentious, the scenes stylish but not over-glamorised. Soderbergh manages to make the perfect cocktail here (something which he, apparently, was unable to repeat) and the end result is a fun, sharp and stylish production, with a decent enough story to hold it all together and a cast of real-life friends having a great time bringing it all to life. It's an exercise in cool and something of a landmark production. It's also a blast and comes highly recommended.