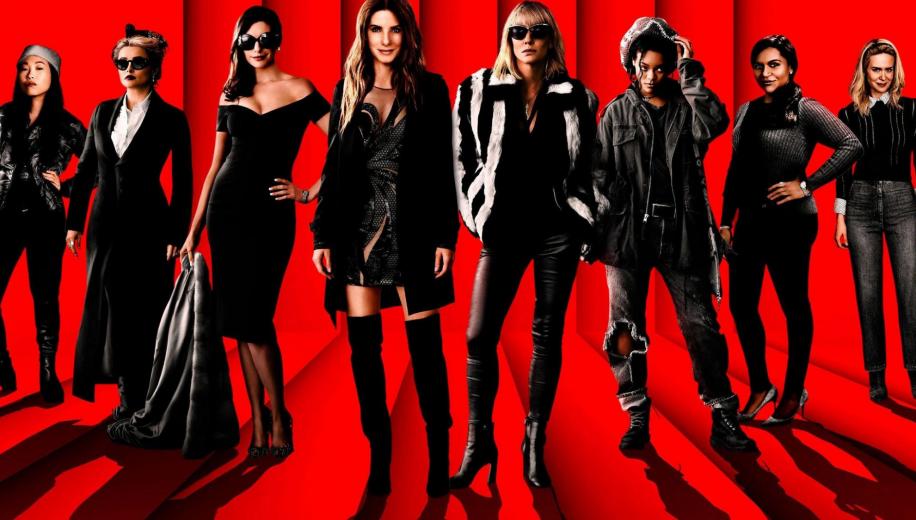 It may not have worked for Ghostbusters, but the all-female Ocean's spin-off proves every bit as enjoyable as the last Ocean's sequel, and easily trumps 12.

Whilst a great concept, and a tremendous remake of what was a fairly light and fluffy original movie more fondly remembered for its cast than anything else, it's only really Soderbergh's Ocean's 11 that can be regarded as something of a gem. Its first sequel Ocean's 12 was a mess, bloated and unfocused, and more than a little bit self-indulgent, often at the expense of the audience's enjoyment of the film. Thankfully the second sequel, Ocean's 13, made up for that somewhat, but it still overextended an already flimsy concept, adding little new and, in fact, arguably just retreading old ground - to admittedly solid effect.

The ever-increasing number of characters didn't do the film(s) any favours either, which is an area in which this new remake/reboot/sequel/spin-off benefits greatly, focusing on a crew of 8 for an elaborate job involving an art gallery and, more importantly, a personal grudge against its owner. Making it an all-female cast is arguably something of a contrivance; infinitely less realistic than the all-male cast of career thieves in the original trilogy, but nonetheless - in practice - it actually works quite well, proving a fresh new take on a formula that was more than familiar even before Soderbergh stylishly reinvented it.


A fresh new take on a formula that was more than familiar even before Soderbergh stylishly reinvented it.

Casting is key, and they chose well with Sandra Bullock, who plays the sister of George Clooney's character - Danny Ocean. Recently released from prison, it takes her seconds to return to crime, with her eye on a grand job, requiring her to put together a crew consisting of both old friends (Cate Blanchett, Sarah Paulson and Mindy Kaling) and new talents (Rihanna, Awkwafina and Helena Bonham Carter). Add to the cast the likes of Anne Hathaway, Richard Armitage and (unfortunately) James Corden, and you've got quite the ensemble. Chemistry is paramount of course, and Bullock riffs well with almost everybody; there's a little coldness between her and Blanchett that doesn't quite go with their characters, but only at the outset, and, as a whole they make for a colourful bunch, with Bullock taking the reins as the leader with ease.

Ocean's 8 doesn't seek to reinvent the wheel, with The Hunger Games director Gary Ross content to remotely see if it still turns, but thankfully his spin-off maintains a fluid efficiency which arguably was nowhere to be found with Ocean's 12, for example, a fresh energy from its new cast, and some reasonably get-to-the-point storytelling. It may not necessarily give the franchise a brand new lease of life, but it's a long way from the disaster everybody thought it might be.

Ocean's 8 dazzles on Ultra HD Blu-ray courtesy of Warner's UK disc, with what is likely to be an upscaled 4K presentation from a 2K Digital Intermediate. Thankfully, it is a very impressive polished modern presentation nonetheless, with the cherry on top being the added enhancement of Dolby Vision.

Detail is excellent throughout, realising skin textures and background flourishes, enjoying the detailing on the dresses and the prison garb, the various settings and every single hair out of place on the near-perfectly-coiffured heads. There's little unintentional softness, and it's a glossy, crystal clear modern image with minimal grain.

The colour scheme is vibrant in this entry, perhaps even more so than the others, dazzling with vivid tones that make the most of the added HDR and WCG components, bringing primary pop to the screen, and rendering deep, rich black levels which boast excellent shadow detail and reign supreme largely thanks to that added Dolby Vision component.

The accompanying Dolby Atmos track is founded upon an already excellent Dolby TrueHD 7.1 core which delivers a stylish score - in-line with the previous scores, but also updated - keen use of surrounds for atmosphere, and clear dialogue reproduction.

Dialogue is, of course, the most important element in this kind of feature and whilst it's not quite as razor-sharp as what has come before, the interactions are flawlessly rendered here, taking precedence across the frontal array. Score comes second place, affording the film some evident style, commensurate to the Soderbergh spin-off in much the same way as the director apes the visual style too. Effects remain largely designed to craft an authentic atmosphere, with bustling galleries, shops, restaurants and streets enveloping you, whilst only a few alarm sounds and more energetic moments really show some in-your-face presence. The LFE input is reliably supportive to all elements, and it's overall - despite not having anything you'd call 'demo' about it - a great little track.

Hardly packed: a trio of short Featurettes a couple of Deleted Scenes and some Trailers.

After Ghostbusters, it's likely many were justifiably concerned about the concept of an all-female reboot/spin-off/sequel/remake of the Soderbergh gem, but this latest addition, whilst not as good as the first remake, is hardly any more objectionable than the existing sequels, and largely quite a lot of stylish fun indeed.


It may not necessarily give the franchise a brand new lease of life, but it's a long way from the disaster everybody thought it might be.

This 4K Ultra HD Blu-ray release affords the film excellent video, very good audio, and a few nice extras, making it a solid package for fans to lap up.