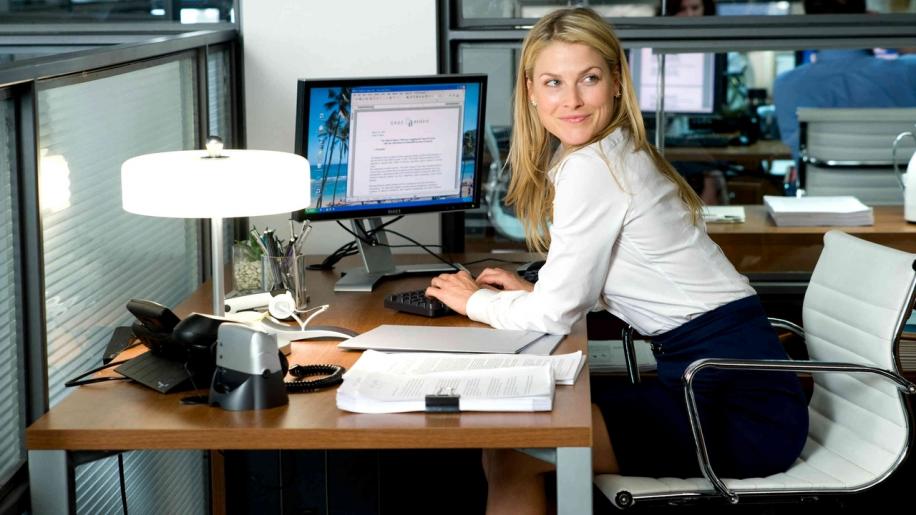 You ever come across that certain someone who takes a particular shine to you, practically worshipping you, pandering to your every whim, laughing at your every joke, desperately trying to get your attention? I'm sure it is a situation that many of us have experienced, whether as the person who has the crush or the person who is the subject of it. Normally it ends in tears, or a sudden realisation that the person you think you're crazy about isn't actually real - just a persona that you have created in your mind and superimposed upon a very real, very human individual, with flaws and everything. Sometimes, however, in slightly more unhealthy circumstances, it can develop into something of an obsession. And this is the subject matter of this glossy new drama, which is possibly one of the, admittedly prettiest, but truly dullest films that I have ever seen.
Derek Charles is a charming, professional exec working high up in an investment firm. He's admired by all around him, commands some amount of respect, and brings in more than enough money to take care of his beautiful wife and son in their newly bought mansion. He has the perfect life. But when a temp arrives at his firm and decides to try and seduce him, things start to get... complicated. You see, Derek has a history with secretaries in his firm - suffice to say that he no longer employs female secretaries, and that he actually married his last female secretary. So when this new girl cracks on to him, he does the right thing and turns her down. Repeatedly. So she tries it on with him in a cubicle in the toilets at the Christmas party. Nope, getting nowhere. So she dresses up in Ann Summers' best and crawls around a lot in the passenger seat of his car. Nope, get out. Then she gets serious. She sends him a slightly sexy (but fully clothed) picture of her by email. Wow.


For some inexplicable reason, Derek doesn't talk about any of this to his wife, instead confiding in his terribly unreliable 'player' best friend and consequently getting the worst advice ever. Of course, when his wife finds out, she reacts like a moron - treating him as if he has actually had an affair when the truth is that he has genuinely tried his best to avoid the obsessive nut. Sigh. Eventually the police get involved, Derek's job becomes vaguely threatened by what is going on, the temp girl goes marginally more batty (although never really appears to be much of a threat) and the wife calms down and decides that maybe it could be a good idea to take her husband's side. And the end that caps all this off is utterly ridiculous.


Obsessed is like a PG-13 Fatal Attraction with less of the fatal and little of the attraction. There's no chemistry between the two lead characters and, more importantly, they never actually have an affair here. Surely that's the whole point of these dramas? The tragedy of betraying your wife, the revelation that it was not worth it, the fact that the wife has to get over it in order to rally together with her husband and overcome the increasingly psycho woman that is now tearing up their lives? That's Fatal Attraction. Obsessed is just the diet version. Without caffeine or sugar or much taste at all. Although it does look pretty. It's one of the prettiest damn films I've ever seen. Wow does Derek keep his hubcaps clean and shiny - I've never seen a Director spend quite so long focussed on them. The gorgeous shimmering streets, the posh events, the perfect mansion home, the shiny cars and clean-cut suits. Hell, Derek looks better after a monumental hangover and being drugged to boot than most people would probably look after getting an early night's sleep!


I'm not sure what the point to it all really is. The temp girl is annoying, but really could have surely been dealt with just by getting her agency to write her off, or contacting the police early-on. The lengths she eventually goes to are relatively insignificant - in terms of obsessive psychos - and if you're expecting her to be more like Misery's Kathy Bates or Glenn Close from Fatal Attraction, well you're in for a surprise. She's just Ali Larter, the girl from Heroes and - ironically - she plays a much more effective 'psycho' in Heroes. Here she looks quite pretty (although they appear to have powdered her skin to accentuate the contrast with Derek's wife) and occasionally broaches on sexy, but is really not very threatening, menacing or anything much more than annoying. She can't even dance in a sexy way. And I'm sure Larter knows how to dance.


Beyonce Knowles. You can't act. You can play the token ex-secretary wife of some rich executive, sure, but the emphasis has surely got to be on the token element. The biggest contribution this singer makes to this movie is the score singing that she does over the course of the movie and its end credits. Her performance is awful. Totally unconvincing as the wife who wants to return to work because she's secretly quite smart, and even worse when she gets on her high horse about Derek breaking their vows (honey, it could have been a whole lot worse - open your damn eyes), the pinnacle of her disastrous performance comes in the denouement, the expected confrontation between her character and the invasive temp. Silly does not cover it. It's almost into the realms of that Showgirls so-bad-its-good style of ridiculousness.


The person I'm most disappointed in, however, is Idris Elba. Having seen him in early Brit TV shows like Ultraviolet, then followed him over several seasons of The Wire, I have come to respect his man as a pretty decent character actor. Sure, he hasn't got a huge film history, but he is always compelling, and has some presence - some gravitas - that he brings with him to every role. Here he seems totally out of place as a suited exec, still swaggering around with attitude (in spite of the fact that he appears to have none) yet often behaving like a scared little child, never taking the increasingly worrying matter into his own hands and letting things get way out of control. I expected more from Elba, who appears to have sold out on the face of this, the most mainstream of his lead roles.


The biggest trouble with Obsessed is that basically nothing much really happens at all in it. In much the same way that Lakeview Terrace was a lacklustre, diet version of Unlawful Entry, Obsessed is Fatal Attraction Lite - zero sugar, zero caffeine and simply no buzz. It appears to be part of the new wave of insipid reworkings of classic ideas, only with their potency removed, stripped bare of poignancy and even entertaining controversy, and left running as something that barely even passes the time. If you want a movie to constantly keep you waiting for something - anything - significant to happen, and to leave you disappointed at every turn for its entire duration, then Obsessed may just be for you. Everybody else should consider themselves warned.