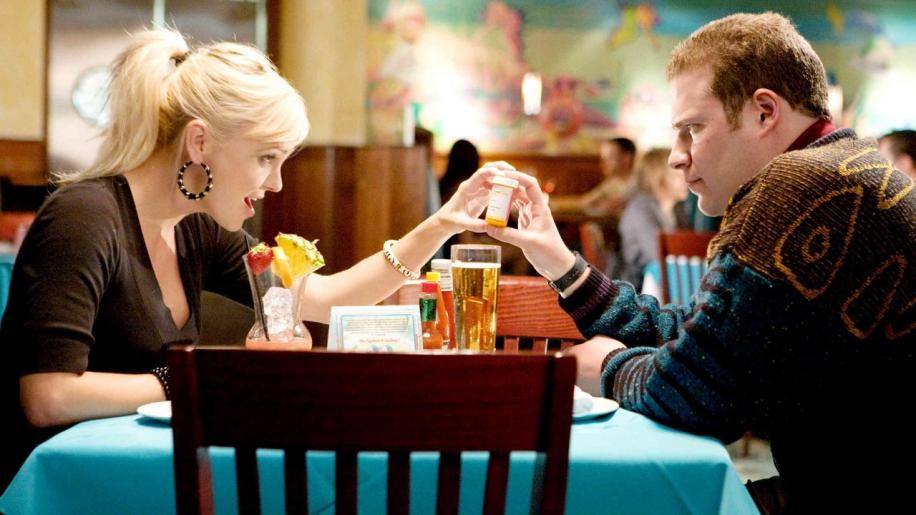 Seth Rogen is fast becoming a valuable commodity in the world of comedy movies. After a couple of significant cameos in superior 'new breed' comedies like Anchorman and 40 Year Old Virgin, he took the lead in the excellent Knocked Up and wrote and starred in the brilliant Superbad, cementing his place on the Hollywood radar. Pineapple Express did not quite hit the mark for me, and Kevin Smith's disjointed Zack and Miri Make a Porno may have employed too many unnecessary shock tactics (even if Rogen was still good in it) but what I was really waiting for was Funny People, the latest film from Judd Apatow (the man behind both Superbad and Knocked Up), which co-starred another comedy favourite of mine, Adam Sandler. Still reeling from the marginal disappointment I felt upon seeing this on the Big Screen, I thankfully now have the opportunity to check out one of Rogen's starring flicks that I missed during its brief run at the cinemas - Observe and Report. Having heard mixed reviews, and after seeing Funny People, I was prepared for the worst but hoped for the best, and was far from disappointed.


Ronnie Barnhardt takes his job very seriously. On paper he may just be another mall security guard, but for him it is much more than that: he is there to ensure the safety of all the staff and customers at the mall, whatever the cost. Still living at home with his single mum and dealing with an ongoing bi-polar disorder, his life gets complicated by two major new threats at his workplace - a serial flasher plaguing the females at the mall and a thief who is evading the security cameras and stealing goods at night - as well as the disgruntled police detective who is assigned to the case. Determined to protect the girl of his dreams - one of the flasher's victims, a vacuous make-up vendor - and prove his worth as a security guard, he even embarks upon a recruitment programme to become a full-blown policeman, but will Ronnie become a victim of his own blinkered views and aspirations, or will plough through cops and criminals alike to save the day?


I find it quite strange how some fairly specific films like this always come in twos. Whether it be Deep Impact and Armageddon; Wyatt Earp and Tombstone; The Prestige and The Illusionist; Volcano and Dante's Peak; or Mission to Mars and Red Planet, Hollywood has fairly regularly churned out blockbusters with almost identical subject-matters often within weeks of each other. From a consumer perspective this offers choice, but often leads to the one that is released first having more of a chance at success - and that one may not necessarily be the better of the two. It also leads to the drawing of direct comparisons and probably less success for either of the two were just one of them released at a time. Of course, the reality is that this is most likely a direct result of studio competition - some execs hear rumours that somebody's doing a movie about Mars, or about magicians, and knock together a clone production in record time, perhaps even beating the original film's release date. Although not direct plagiarism, it is far too specific to be a coincidence. Two months' prior to the release of Observe and Report, Kevin James' Paul Blart: Mall Cop was released - covering almost exactly the same comedy material about a disgruntled mall security worker who lives with his mum, and it must have had a significant impact on the success of the latter-released production.


One test version of Observe and Report was significantly toned down for a wider potential audience, but the final cut was definitely an adult comedy, much darker in tone than the family-orientated Paul Blart, and all the better for it. It was, after all, originally pitched as a comedic take on the classic Scorsese/DeNiro drama Taxi Driver, so there was plenty of potential for dark overtones. But did the repeat audience tests result in the delay in its release? Because the Paul Blart's coming out first surely must have significantly dented the Box Office pull of the latter, better production - which almost went totally under the radar in the UK. Suffering purely through association, Seth Rogen's superior comedy should have done much better than it did, and it is just a shame to see this effect.


Observe and Report is definitely not for young audiences, not family material, joining the likes of Pineapple Express and Zack and Miri in terms of darker comedies that are still within that same 'new breed' genre as modern classics like Superbad and Knocked Up. Whilst this makes for plenty more swearing, some quite brutal violence, and even a dubious date-rape scene (although played for effective laughs, the scene - somewhat misleadingly - passively ratifies the concept of getting someone very drunk so that you can sleep with them, which ignores the fact that - legally - consent cannot be given when you are intoxicated beyond reason), it does mostly yield hilarious results. I don't think I've ever seen such a funny argument - entirely based around just saying 'f***' you in different ways to one another, and the epic battle between the mall guard and a bunch of cops - scored by the Queen song from Flash Gordon - are both truly inspired moments.


However Observe and Report is still largely a movie about moments. Rather than having a consistently funny script - as fans of Rogen were probably spoiled by from his earlier efforts - it has a regularly amusing one, with plenty of stylish, comic moments populating its runtime. Whilst there is nothing overly memorable, the movie stands up as being one of his better recent works because it remains fairly funny throughout, with few exchanges going without at least a couple of funny lines, generating anything from a smirk to a moderate bout of laughter.


It also goes for a slightly more surreal approach - a la Anchorman - and gives Rogen the chance to embrace a true character, rather than just a composite of true-to-life personalities. Rogen's bipolar mall cop Ronnie offers up almost the same opportunity Sandler's anti-terrorist operative-turned hairdresser Zohan did in the fantastic You Don't Mess with the Zohan. He gets to play crazy, borderline psychotic-in-a-uniform, a really exaggerated take on anything potentially real, and it works supremely well for him.


Surrounded by plenty of colourful characters - mostly intentionally funny clichéd ones as well - Observe and Report may be led by one strong character, but it comes together thanks to a whole bunch of interesting ones. Ray 'Narc' Liotta plays it totally straight as Ronnie's cop nemesis, Detective Harrison, whilst Anna 'Scary Movie' Faris goes for over-the-top pouting and slutty behaviour to represent his dream girl, the vapid Brandi. Crash's Michael Pena plays Ronnie's slick, lisping mall cop partner - although I was expecting a few more laughs from his inclusion here - and we get cameos for a bunch of familiar comedy faces including Pineapple Express' Danny McBride and Funny People's Aziz Ansari.


This is really all Rogen's show, however, and he certainly makes the most of his opportunity to be a comedic Travis Bickle, playing it straight as he mimes blowing the head off the police psychiatrist with an imaginary shotgun, or takes on a bevy of angry cops with just his trusty flashlight. He takes himself so seriously it's almost scary, and his delivery of some of the lines is absolutely spot-on. It's worth noting that much of his dialogue was improvised, as can be picked up upon in the excellent outtakes, where it is clearly shown that Rogen is a freaking genius when it comes to getting into this character, taking some of his comedic rants in totally unprecedented directions.


Observe and Report most certainly won't be to everybody's tastes, it is far too surreal, non-pc and boundary-pushing to be accepted by the majority, but generally I prefer comedies that are prepared to take a few risks over those that play it totally safe and end up being pretty insipid in the process. Some try so hard to be harmless that they end up being totally unexceptional, just another generic please-everybody comedy, a la Paul Blart: Mall Cop. Observe and Report may make you scratch your head occasionally, wonder whether you really should be laughing at some of the jokes - they can lapse into bad taste - and grimace at a few of the shock-value gags, but it at least provokes a reaction, and is extremely stylish (in a non-pretentious, self-mocking way) and pretty damn funny to boot. I much preferred it to the recent, lacklustre Paul Rudd vehicle I Love You, Man, and, although it is not as good as You Don't Mess with the Zohan, it definitely has that kind of feel to it. Enjoyable, surreal fun.