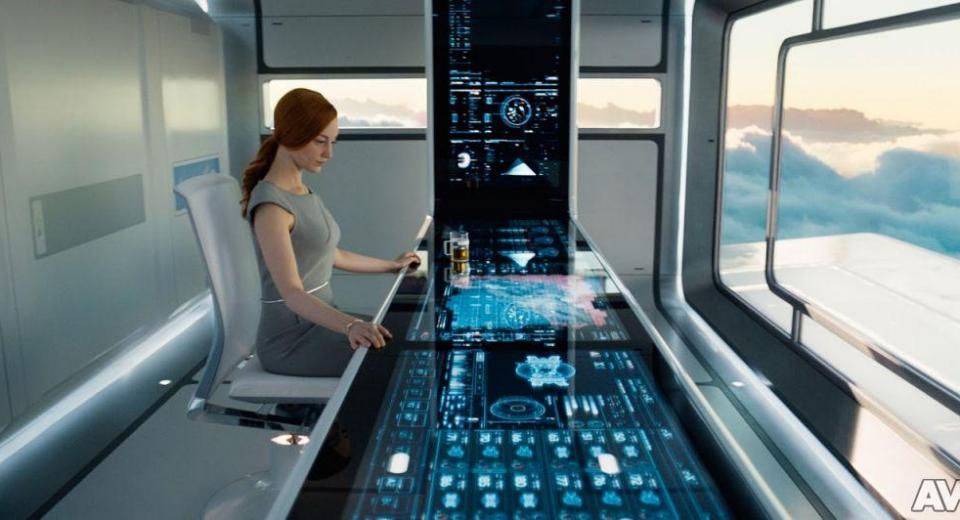 Well you've probably already heard the reports by now. In fact, for those where impatience overrides cost, Universal's Region Free US Blu-ray - released two weeks earlier - would have probably already blown you away. Demo disc of the year? Almost certainly. Perfect? To the extent that our current technology can judge it, yes. And thankfully the identical UK package offers up the same stellar AV presentation, so good that I was tempted to ask The Powers That Be whether they'd let me score this 11 out of 10.

Edge enhancement? Invasive DNR? Forget about it, this is flawless, as close to perfection as the format allows, with no signs of digital manipulation or defects. Actually, I tell a lie, there's a few frames when Morgan Freeman's character gets introduced from the shadows, where the image struggles with the light levels. That's about 10 seconds of questionable integrity and about 7550 seconds of perfection. Barely worth mentioning.

The colour scheme may be somewhat restricted, bright whites dominating the palette, with even the vibrant green landscapes toned down to reflect the dystopian setting, which, itself, brims with browns and greys. Black levels are (99.9% of the time) resoundingly strong and allow for rich night scenes and excellent shadow detail, and all this with no sign of crush whatsoever.

In many ways the daytime photo-negative of Kozinski's previous visual masterpiece, Tron: Legacy, Oblivion revels in its visuals, and even those that don't get on with the film itself would be hard-pushed to complain about the AV experience.

Equally outstanding is the accompanying DTS-HD Master Audio 7.1 track, which also takes the aurally-magnificent material and promotes it accordingly. Dialogue comes across clearly and coherently throughout although it is, by far, the least important element.

Indeed the offering of an isolated score alternative gives nod towards the strongest part of the proceedings - M83's impressive offering standing out as comparable to, though not quite as impressive as, Daft Punk's equivalent on Kozinski's Tron: Legacy - and the ever-driving beats helps maintain pace and accentuate both flight (literally) and fury, reflecting both the visionary scale and the exciting thrills within.

The effects coverage is not far behind in terms of being deserving of praise, crafting a strong and immersive environment within which the greatest set pieces erupt. Bullets and blasts promote fierce directionality and acute precision, and both the drones and the bubble-ship spring to life within your very living room. The LFE channel is more than active throughout, going some way towards lending weight towards the various crafts, weapons and battles, as well as giving the score further depth and dominance. All in all one of the greatest aural accompaniments I've come across of late - if ever - this is, without a doubt, yet another perfect-10 reference offering.

In terms of extras, we get a hefty package that boasts all of the same offerings as the US release, including the biggest bone of contention – the Isolated Score. You see, whilst the US release sports a lossless Isolated Music Score, for some reason we get an inferior lossy alternative. Still, on the plus side, at least we get the damn track.

Feature Commentary with Writer/Director Joseph Kosinski and Star Tom Cruise
A very interesting and informative offering, this full-length audio commentary has these two talk about what they did to put together this film, and what is revealing is just how much Cruise was involve in the production from the ground-up. They discuss the elaborate future sets and vehicles; how amazing Iceland was as a suitable backdrop for the post-apocalyptic landscapes; the sci-fi references across the piece, and the subtle little touches along the way which have a far bigger effect second time around. If you enjoyed the film, and want to learn a little more about everything from the story background to the production shoot; from the effects to the anecdotes; from the cast to the characters – then this is well worth your time.

Promise of a New World: The Making of Oblivion
This comprehensive Documentary is split into five distinct parts – Destiny, Voyage, Combat, Illusion and Harmony – which allow us insight into the pre-production, location and practical sets; the Bubbleship (both real and effects work); the fight sequences (both close-combat and gun-based); the visual effects; and the stunning score, respectively. Running at well over three-quarters-of-an-hour in length, between this and the Commentary, they’ve really covered all that you could possibly want to know about the feature. Excellent.

M83 Isolated Score
Despite the lossy restrictions, this DTS 5.1 presentation of M83’s terrific Isolated Score is a welcome addition, and one which offers up a very different experience, should you so wish it. Dropping out the dialogue and watching the entire movie with just M83’s score is, at times, sublime. Try it.

Deleted Scenes
Four short Deleted Scenes round off the disc, totalling just 4 minutes of extra footage, and showcasing a couple of tiny touches that you might have liked left back in. Bubbleship Flyby is interesting because it shows a brief look at the Tower being rotated; Stadium: Original Opening is slightly more serious in tone, but is far less interesting than the scripted plan for the drone to kill the dog; Medkit shows you a little bit about how the futuristic devices work to heal; and The Archives is a short bit on the library and old materials that the Scavs have managed to collect.

Oblivion is a visually stunning experience, with strong performances driven by another dedicated offering from Tom Cruise; interesting, atypical characters; a suitably twisty old-school sci-fi story that pays loving tribute to all the great sci-fi classics; gorgeous cinematography and impressive, well-integrated visual effects; a fabulously evocative score from French electronic band M83 and epic blockbuster action helmed by the same guy who delivered the tremendous audiovisual experience that was Tron: Legacy and who also wrote the story.

Whilst it probably plays things that little bit too safe to forge its own path as a modern classic, oftentimes erring on the side of style over substance, even if the one is far from drowned out by the other, it’s still one of the best sci-fi blockbusters we’ve seen in years.
On Region Free UK Blu-ray, you get the choice between the Standard Release and the lavish Limited Edition Steelbook, both of which offer up some of the best video and audio that I have ever seen on the format – demo, reference and 11/10 quality all the way. The extras are also thoroughly comprehensive and, even if we only get the lossy alternative to the US disc’s lossless presentation of the Isolated Music Score, this comes easily recommended as a blind buy.

If you missed it at the cinema, which I certainly wasn’t prepared to do after missing out on seeing Tron: Legacy on the Big Screen, then you should definitely pick it up and check it out now. Recommended.