Rock solid in its presentation and thoroughly entertaining 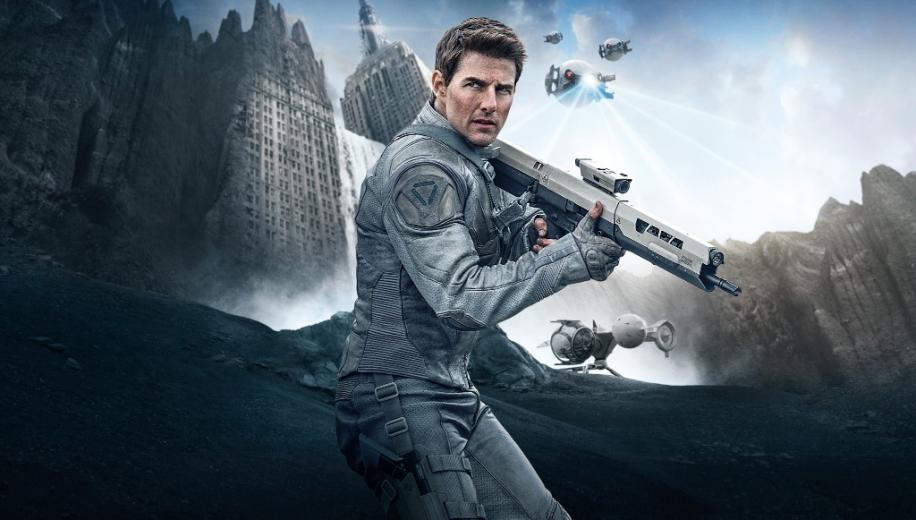 How can man die better than facing fearful odds, for the ashes of his fathers and the temples of his Gods

He may only have two films and one game under his belt, but director Joseph Kosinski has certainly made a name for himself in terms of audio-visual cinema. In his second film, Oblivion, Tom Cruise plays a drone repair man and possibly the last man on Earth after an alien invasion devastated the plant, yet he is plagued by dreams of a person he has never met. With only two weeks left of his mission, things start to go awry, and Jack begins to question who he is, his mission and his entire place in the world. And when the truth is revealed it not only turns his world upside down, but might possible save it as well.
In Kosinski’s hands, what is actually quite a nifty little sci-fi yarn about memory loss, belonging and discovery becomes a grand opera and a visual delight. Epic vistas, sweeping landscapes and lofty transitions are backed up by a truly magnificent score (by M83) that adds a majesty seldom realised in cinema. Add to that a solid design for the world, high class and dedicated acting from all those involved (including Olga Kurylenko, Andrea Riseborough and Morgan Freeman) and action set pieces that are genuine edge of the seat viewing and you are left with a feast of entertainment for both your senses and your intellect. There have been complaints amongst some quarters that the UHD Blu-ray isn't as detailed as the regular Blu-ray and to a certain extent this is true. The Full HD Blu-ray, which was superb to begin with, does look more detailed in some scenes but it can also look slightly 'digital'. The UHD Blu-ray has a more film-like quality and there is plenty of detail, from skin texture (pores, hair, imbedded grime etc.) to distant mountain ranges. Thanks to the HDR there is a definition to the edges that holds sway, from desert sands, rocky screes or grass blades in the oasis are all clear and distinct and feel as if you can run your fingers over them.

The colour palate of the film stylistically favours greys and blues; the drones, bubbleship, living quarters, uniforms and even the scorched Earth, in places, have a very similar hue, thus the advantage of the WCG and HDR have little, at first glance, to add. But overall the picture is far brighter, and with its reliance on deeper blacks adds even more punch and depth to the frame. Whilst the majority of the colours are very similar in make up to that of the standard Full HD Blu-ray, sky lines, the greener valleys and the fruit bowl in the cabin of the oasis benefit greatly by being bolder and more vivid. Indeed the distant mountains shots all look spectacular with brighter highlights giving rise to a more defined edge.

Explosions, fire and candlelight are far hotter than previously and burn off the screen, while the search beams of the drones are piercingly bright. There is no denying that the addition of WCG and HDR brings the image to the fore, and although it might not quite the huge step up some might be expecting, in its own right it is excellent. Digitally there are no compression issues or edge enhancement, though there was still the occasional bout of banding (mainly in torch light and smoke) and even then, only slight. The digital source is obviously in pristine condition and remains a terrific picture throughout. Simon Crust reviewed the audio on a standard 5.1 surround set up – Another awesome surround mix that places you firmly in the centre of the action. There is plenty going on in this mix, from the flight of the bubbleship (and drones) to their gun fire, weather, explosions, the ‘beep-beep’ distress call of the drones are all layered very well and given plenty of pinpoint steerage around the room. The surrounds are used for both ambiance and effects (the storm raging while the bubbleship flies through it is very well realised). The epic score from M83 sweeps majestically around the room, while the bass roots the whole thing in reality. Bass itself is deep, tight and engaging with LF effects aplenty adding a great deal of oomph down below. Dialogue is clear and precise, dominated by the frontal array and never lost in the mix, the slight echo in the sink holes or base is wonderfully realised. In all a terrific surround track.

Steve Withers reviewed the audio on a 7.2.4-channel Dolby Atmos setup – The soundtrack alone would be a good reason to buy the Ultra HD Blu-ray release of Oblivion, providing viewers the chance to experience the film in Dolby Atmos. The multi-channel audio on the original Blu-ray release was already reference and this new object-based mix simply adds another layer to the sound design. The result is a surround sound experience that combines a pleasing amount of subtle ambience with some aggressive effects when required. So the scenes in the sterile environment of the tower are portrayed through sounds reflected off metallic surfaces, whilst the underground world of the 'Scavs' is revealed through more organic echoes. The scenes where the bubble ship fly through huge storms are delivered with excellent immersion, taking full advantage of the overhead speakers. The designers also use this extra height for flyovers and the scene where the drones chase the bubble ship. However dialogue remains clear throughout and M83's marvellous score is effectively disseminated throughout the sound field, with obvious emphasis on the front channels. The LFE channel is also used to deliver greater impact, especially during a huge explosion and when the drones fire their weapons. Overall this is a great Atmos soundtrack that nicely compliments the visuals. There's one feature on the 4K Ultra HD Blu-ray:

Audio Commentary – This is the same track as found on the previously released Full HD Blu-ray with director Joseph Kosinski and star Tom Cruise, who chat about the production of the film from its inception to it casting to its technical merits to its design in a frank and enthusiastic manner making it a one-stop feature to find plenty of technical and anecdotal details.

The remainder of the features are on the Full HD Blu-ray:

Promise of a New World: The Making of Oblivion – A near fifty minute making-of feature, split into 5 parts (Destiny, Voyage, Combat, Illusion and Harmony) that discuss pre-production, location and practical sets, the Bubbleship (real and effects), the fight sequences, the visual effects and the score respectively.
Deleted Scenes – Four in total entitled Bubbleship Flyby, Stadium: Original Opening, Medkit and The Archives for a runtime of about 4 minutes.
Isolated M83 Score – Watch the film with just the majestic score. Oblivion sees Tom Cruise as Jack Harper, a drone repair man and possible the last man on Earth after an alien invasion devastated the plant, yet he is plagued by dreams of a person he has never met; and when he is captured by the Scavs he learns a truth that will turn his world upside down but might just save it as well. Director Joseph Kosinski directs an audio-visual feast (in terms of design, layout and a magnificent score), a sci-fi tale that is grand in its ideas, even if it is a tad predictable once the truth becomes known, but is nevertheless rock solid in its presentation and thoroughly entertaining to boot.


Oblivion on Ultra HD Blu-ray is an audio-visual feast

The 4K Ultra HD Blu-ray is also an audio-visual feast; whilst the picture may not be quite the step up in quality you would expect, the standard Blu-ray is hard to top, it does however benefit from the wider colour gamut and higher dynamic range to deliver a more film-like quality. This is matched by an awesome Dolby Atmos soundtrack that never puts a foot wrong –it is engaging, absorbing and gorgeous. The extras, mostly on the regular Blu-ray included in the set, are a holdover from that previous release but remain highly informative and entertaining in their own right.