Praise the Lord, it's time to rediscover a classic 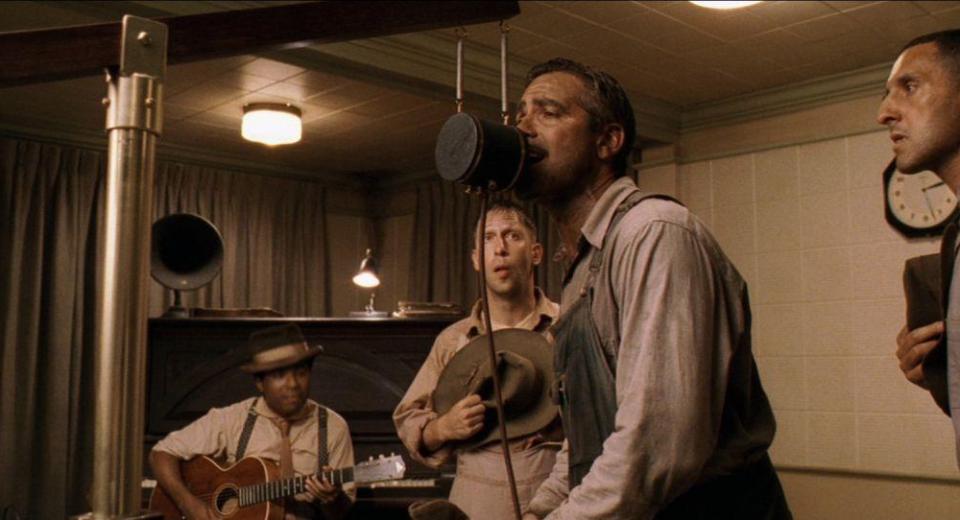 I do like movies with a short gestation period. They always seem sharper and more satisfying than the lumbering, crisis ridden train wrecks that some movie projects become. Witness John Carter, a movie in planning for so long, yet the end result just did not work.
O Brother, Where Art Thou? was conceived as a re-telling of Homer’s Odyssey – the Greek epic poem telling the story of Odysseus as he struggles to return home after the Trojan War. Here, we exchange Ancient Greece for the plains of Mississippi and Odysseus for Ulysses Everett McGill, but many of the adventures he and his traveling companions experience can be related back to the 2000 year old original. But why the name O Brother, Where Art Thou? This comes from a 1940’s film – Sullivan’s Travels, where the plot revolves around a director attempting to make a fictional film about the Great Depression.

Ulysses Everett McGill is played by George Clooney. He accepted the role on the strength of the producers – the Cohen Brothers, without even seeing the script. Although Joel is credited as director and Ethan as producer, it is universally accepted that they both had an equal hand in the whole of production, with dual credits as screenwriters. Set in the Great Depression, we find Ulysses Everett McGill escaping from a prison chain gang with two other felons – Pete Hogwallop (John Turturro) and Delmar O’Donnell (Tim Blake Nelson). It is fair to say that McGill is the brains of the operation and would have escaped on his own, all things being equal. He has persuaded his fellow gangers to make the escape on the promise of a share of $1.2 Million dollars, stolen from an armoured car heist and buried on his property in a valley, soon to be flooded for a hydroelectric project. The real beauty of this film is not the storyline or expansive Mississippi vistas, but the contemporary bluegrass music from the era. From the prison chain gang spirituals to the delta blues, this movie really is built on traditional music from the Deep South. Almost every scrape and mishap the trio have is reflected in the music, most with brilliant comedic overtones. Indeed, the very first attempt to get away from the prison farm involves the three of them climbing on board a moving railroad car. The first two manage it, only to be dragged back off when the third trips before he makes it aboard. Truly laugh out loud funny.

Everett is more concerned about his hair than anything else, not resting until a tin of his favourite Pomade (hair grease) is acquired. His accomplices are not so bothered about their vanity, thinking only about their share of the loot. As they stand by the railroad track, watching the train trundle away, a blind prophet squeaks into view on a gandy dancer – a hand propelled rail truck and offers them a ride. As they travel slowly along, he reveals that although they seek a great fortune, it will not be the one they are expecting.
They find temporary respite and the means to remove their chains at Hogwallop’s cousin’s run down farm. He frees them from their chains and finds them a change of clothes, only to then turn them in to the authorities for the reward. Sheriff Cooley attempts to burn them out of the barn they are hiding in, only to be thwarted when they escape with the help of Hogwalllop’s nephew. Sheriff Cooley is generally considered to be the devil incarnate, his eyes permanently concealed behind dark glasses, his face impassive hatred.

The spiritual theme is continued, as Dumb and Dumber – as Everett refers to his partners, stumble upon a river baptism and decide to have their past sins washed away. The sight of the white clad brethren moving almost silently through the wetlands, as the haunting melody of the Negro spiritual, sung acapella by Alison Krause floats over is a memorable scene within the movie and contrasts with the more comedic and in some cases, violent scenes that are also there to enjoy. We get an almost instant juxtaposition as the gang pick up it itinerant musician Tommy Johnson, who has just sold his sold to the devil in return for his gift of blues guitar. This character is modelled upon the real blues guitarist Tommy Johnson, who famously claimed he had done exactly that, and entered into a pact with the devil in return for his extraordinary musical talents. Tommy tells them of a blind radio station owner, who pays good money for new signing talent and as times are hard, “The Soggy Bottom Boys” cut a track. Unbeknownst to them, it becomes a hit across the state and they are now stars in absentia.

As Everett makes his way back home, he unexpectedly meets some of his young daughters, who explain that as far his ex-wife is concerned, he is dead and she is soon to re-marry a respectable man and carry on her life without him. She is a hard woman, who will not be argued with, so God help Everett if he cannot accede to her wishes.

So between the sirens in the river looking to seduce the trio, John Goodman as the evil bible salesman, bank robber “Baby Face” George Nelson, Sheriff Cooley and the Klu Klux Klan, it looks like it is going to be a rough ride to the prize the trio seek, let alone redemption and the restoration of Everett’s marriage. This really is a funny, well written film and even if bluegrass music is not your thing, I think you will appreciate the quality of the sound track all the same. Clooney puts in a great performance, but his co-stars’ portrayal of the slow witted, hick town raised unwilling partners in crime are just brilliant, their language and mannerisms leave you in no doubt about their characters.

A thoroughly enjoyable film, with the added advantage of being easy to follow and quite laid back, but not without a few moments of violence and surprise. If you are a student of the Greek Classics, you can have extra fun relating the various adventures back to the original tale as well.