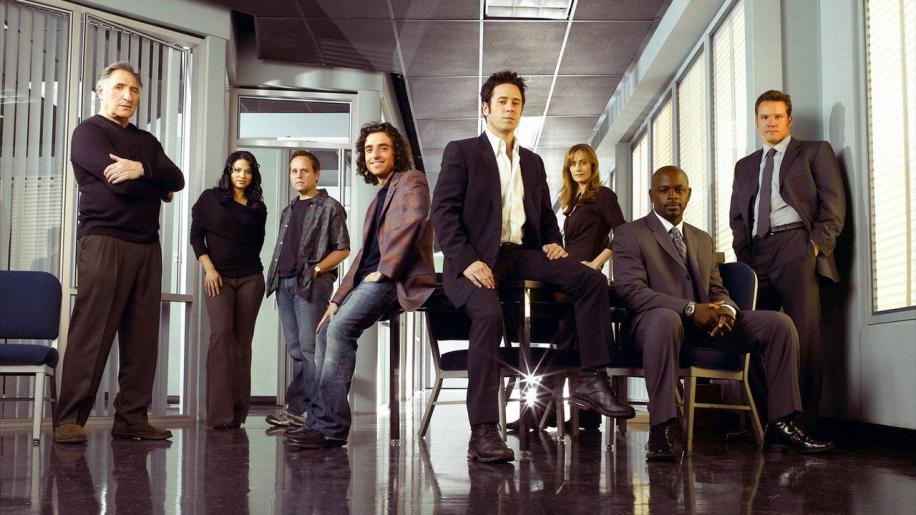 Presented in an anamorphically enhanced 1.85:1 ratio, Numb3rs boasts a reasonably fine transfer, with a few minor faults which prevent it from being truly Grade-A product. As benefiting a series produced by the overtly stylised Scott brothers, Numb3rs is a very well constructed show. There is a very subtle but effective use of colours to highlight the vastly different worlds the two brothers inhabit, and this is well represented in the DVD, with the inhospitable blues and greys of the crime fighters contrasted well with the warm and welcoming autumnal colours of Charlie's university and home life. Skin colours are consistently natural and blacks are solid and robust.

Where the image loses marks is in overall picture fidelity. There's little amiss here and nothing noticeably poor, but the more discerning of viewers may notice the image has a tendency to be a touch soft and grainy at times, which is a tad disappointing for such a recent release. There is occasional evidence of some dirt on the print, but again this is very minimal. Overall a solid result here, with no major complaints. Presented in a Dolby Digital 5.1 track the audio is, like the picture, good without ever becoming remarkable. As should be expected in such a recent release, dialogue and effects are crisp, sharp and audible, and there is a nice level to the mix. Rears are called into play when the action hots up, although primarily for soundtrack purposes. LFE channel is noticeable but subdued for the most part, and there is a decent attempt to provide some special direction throughout. This first season arrives on DVD bundled with a relatively comprehensive selection of supplemental material.

First up we have no less the five audio commentaries included, which cover the episodes 'Pilot', 'Uncertainty Principle', 'Counterfeit Reality', 'Sniper Zero' and 'Dirty Bomb'. Commentaries are from a range of cast and crew from the show, and feature producers Cheryl Heuton & Nicolas Falacci, co-executive producer David W. Zucker, supervising producer/writer Andrew Dettman, show directors Alexander Zakrzewsk and Paris Barclay, and actors David Krumholtz, Rob Morrow, Judd Hirsh, and Lou Diamond Phillips. Although such a wealth of commentaries can be daunting, these are surprisingly fun. The number of contributing voices means that the tracks have quite a varied mix up of participants ensuring that they never really become too repetitive. In terms of content, it's a nice mix between informative talk and light hearted humour, which make these a reasonably entertaining listen.

Disc four contains the remaining additional features. Opening up is a twenty minute featurette entitled “Crunching Numb3rs: Season One”. This is a tradition cast and crew look at how the series came into being, with interviews with quite an extensive list of contributors including Ridley and Tony Scott. As is the case with many featurettes of this type, there isn't really a great deal to get your teeth into aside from standard PR fluff, but this goes by quite amicably.

“Point of Origin: Inside the Unaired Pilot” (12:55) is probably the most worthwhile inclusion here in terms of interest. An original pilot for the series was initially produced in early 2004, but was rejected by the network (whom at least saw enough potential to commission a second pilot to address their concerns). Featuring a different cast (Krumholtz remained) including Michael Rooker, this featurette shows a number of clips from the unaired material and provides an insight from the creative team into the changes made to the original show. It's a fascinating watch, but it would have been nice if the pilot had been reinstated in its entirety as an extra (with commentary), so we could draw our own conclusions on its worth in more detail.

“Do the Math: The Caltech Analysis” is a ten minute excerpt from a talk presented by Caltech Professor Gary Lourdan (who was math consultant for the series). Lourdan discusses some of his favourite clips involving mathematics from the show.

“Charlievision: FX Sequences 1.0” (16:18) is a section which focuses on the shows moments of visual experimentation, which show mathematical equations in an attempt to visualise the workings of Charlie's mind. Visual effects supervisor Brad Powell guides us through the scenes, but to be honest I found these sequences a touch gimmicky and clichéd when screened in the actual episodes themselves, so this did little for me. They seemed like an example of Tony Scott excess in an otherwise well balanced show, but I'm sure many will like them and if so, this is the place to come.

Rounding off is around fifteen minutes of filler in the shape of audition reels and bloopers, neither of which really entertains unless these supplements are your bag.

All in all a reasonably generous selection of solid material, and certainly more generous a helping than is customary for TV show releases on DVD. A very well judged blend of mathematical wizardry, action and procedural drama, Numb3rs is well acted, and an engagingly innovative take on the cow show. Well worth seeking out.