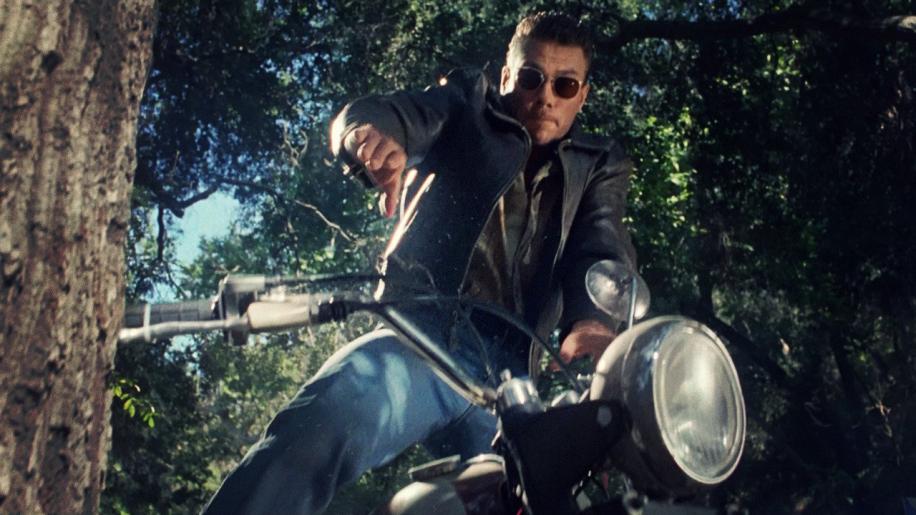 Jean Claude Van Damme can act. I have said it before and I will say it again – and if you feel like arguing the point, please check out his semi-biographical drama JCVD where he proves such, in his native French language no less! I completely understand why he has been pigeon-holed by moviegoers as being little more than a monosyllabic thick-accented high-kicking brawler; an action star whose commercial viability expired long ago with both age and the death of the 80s/90s action icon. I agree that many of his films are fairly poor, cheesy, repetitive productions – designed purely for fans of fisticuffs, and often with little else to offer as a result. He is basically on par with Steven Seagal in terms of action stardom, and has, similarly, seen something of a resurgence in popularity recently – both taking bit parts in bigger movies (Seagal in Machete, Van Damme’s in the upcoming Expendables 2), as well as promoting their own reality TV shows. All the while he has been tinkering with his long-gestating labour of love, The Eagle Path, which is finally due for release in a couple of months’ time – unfortunately, still straight-to-DVD, as most of his recent titles have been. It’s a shame he’s spent three decades in the movie industry and found himself consistently typecast due to his martial arts skills; because he really can act. And, even looking back over his long litany of action-orientated movies, it’s been well over ten years now that he has been showing glimpses of his talents beyond sheer brutality in myriad films from the surprisingly oppressive Universal Soldier: Regeneration to the remarkably effective revenge actioner Wake of Death. Oddly, too – and supporting his assertion that he always did try and seek out more unusual scripts (the productions of which did not always go according to plan) – several of his older titles have had some pretty weighty heritage: Hard Target is a loose adaptation of The Most Dangerous Game, and a little-known 1999 film from him called Inferno (aka Desert Heat) is actually a remake of the Kurosawa classic Yojimbo (which had already inspired A Fistful of Dollars and Last Man Standing; and whose source novel, Red Harvest, had been adapted for Miller’s Crossing). And his 1993 action drama Nowhere to Run, despite not acknowledging the fact in any way, is actually a fairly faithful modern-day update/remake of the classic Western Shane.

Sam is a convict, on the run after busting out of a prison convoy. Hiding out in a small Midwestern town, he befriends a single mother, Clydie, and her young son, soon finding out that they are being oppressed be a nasty land developer who is intent upon ousting all of the local citizens in order to pave the way for his latest project. To this end he dispatches men to intimidate – and perhaps do worse to – the locals. But when they come to harass Clydie and her son, Sam feels compelled to intervene, even if it may threaten his own life and liberty.

The early nineties were arguably the peak of Van Damme’s career; he had just left the early-stage no-brainers and graduated to Hollywood – making many of his most successful and, arguably, most well-received productions during that period – Univeral Soldier, Hard Target, Timecop and Sudden Death amidst them. Nowhere to Run, however, was clearly a (somewhat feeble) attempt to do something slightly different. On the plus side, this means that we get to see another side to Van Damme, in what is much more of a slow-paced romance-drama-action-thriller, rather than just another one of his trademark outright actioners; and as a result the story is better developed, and the characters marginally more well-rounded. On the downside, the end result does not particularly excel as either a rom-dram-action-thriller, nor does it stand up as an outright actioner – the requisite elements for both types are simply not strong enough to make it noteworthy in any respect.

Van Damme is clearly trying his best to please everybody in this particular project, but that does not always work either. Loosely strumming at his frequently hidden acting strings, he manages to bring a reasonable amount of substance to his pivotal role; making for a more interesting character when compared to the usual one-dimensional brutes he plays. The trouble is that he still has some distinctly out-of-place one-liners, as if it was in his contract to deliver these Arnie-style lines in every single film he does. They may be vaguely amusing – cool even, back in the day – and therefore may add to the pure entertainment value, but only at the expense of the movie's dramatic credibility. A slightly more refined script may have pulled this bit back – but unfortunately we’re dealing with the prose of none other than Joe Eszterhaus, whose best work was Basic Instinct, but whose credits also include Showgirls, Sliver and Jade, all really bad movies. So what could have been a clever update on Shane; a more dramatic turning point in Van Damme’s career; and a semi-competent action-thriller to boot, ends up playing out only a little bit better than the Seagal equivalent film (stranger helps a vulnerable young woman and the local townsfolk fight off some villains who are attempting to rape the land), Fire Down Below. In other words – it’s engaging entertainment for the duration, perhaps slightly better thought-out than much of what Van Damme had been up to up until that point – but it’s simply nothing truly memorable at the end of the day. Saturday matinee kind of fun.

In an attempt to further bolster the dramatic nature of the proceedings, we get several memorable faces padding out – and often chewing – the scenery: from go-to uber-villain Joss Acklund (on Lethal Weapon 2 form) as the nasty land developer; to Silence of the Lambs serial killer Ted Levine as his lead henchman. Acklund goes through the motions – but is always utterly convincing as a greedy fat-cat businessman; and Levine makes for quite an effective smarter-than-average lieutenant. Then there’s the ever-cute Rosanna Arquette, who plays the romantic lead, the feisty but still eminently vulnerable single mum who Sam has to protect – and the chemistry that Van Damme has with both her and the child actor who plays her son (Kieran Culkin, Macaulay’s younger brother) certainly marks a plus point for the feature; with some genuinely touching stand-in father/son moments and even a few reasonably authentic romantic moments (certainly the best on-screen romance Van Damme’s ever pulled off) as well.

The Director, Robert Harmon – whose film career has had little to note, other than the classic Rutger Hauer horror-thriller The Hitcher – does his best with Eszterhaus’s cliché-ridden script, and works around Van Damme’s language limitations (he’s far better in his native tongue, but the second best thing is always to have him say less and visibly emote more – which Harmon attempts, sometimes effectively, to do here) to provide some reasonably professional action sequences, a few genuinely dramatic, more dialogue-driven moments, and a fairly strong core to the whole undeniably simple, low-key, small-scale narrative. There’s no doubt that the old adage of ‘a script that just strings together a series of action scenes’ applies to many of Van Damme’s action flicks, but Nowhere to Run – along with a few of the other movies during this period of his career – actually manages to rise above that, even if only a little bit. It’s good, solid entertainment from the action hero’s camp, providing elements of romance and drama, as well as action and thrills; even if it never quite excels in any single field (in some respects, the action sometimes actually gets in the way of the semi-decent drama). And whilst it wasn’t exactly a Box Office hit with critical acclaim to boot, it's still just nice to see Van Damme try and explore something different at this stage in his career. Don’t expect Erin Brokovich, or Shane; but also don’t expect another brain-dead actioner with Van Damme playing twin brothers; this one’s a different kind of dish, one which is really quite palatable in its own right.