Now You See Me Movie Review

The Closer you look, the less you see... 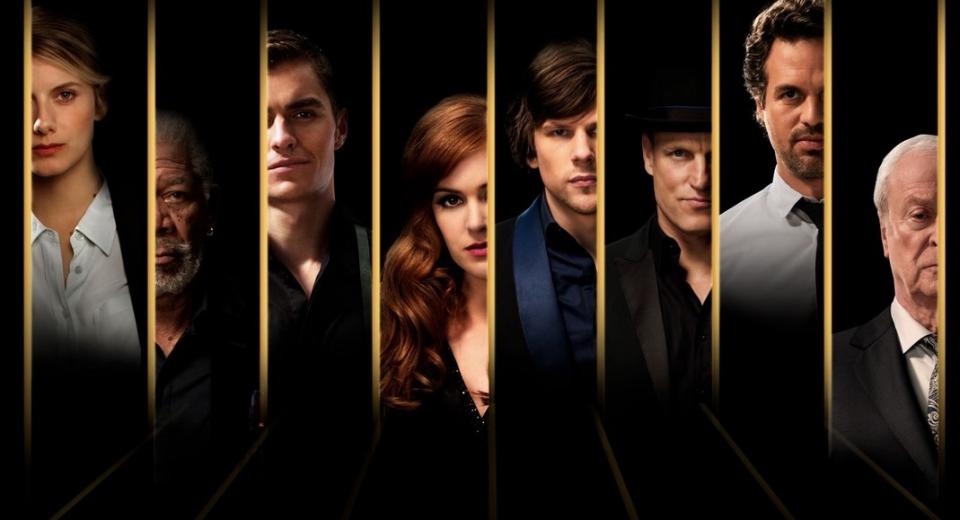 Everyone loves a magic trick and in recent years magicians and illusionists have enjoyed a level of popularity that hasn’t been seen since magic’s heyday of the late nineteenth century. That particular period in the history of the illusionist’s art was covered in The Prestige, Christopher Nolan’s brilliant film about the bitter rivalry between two turn of the century magicians. Now You See Me is also about magicians and as such will no doubt draw comparisons to Nolan’s earlier film, even though they’re very different creations. Now You See Me is set in the present, or possibly the very near future given some of the technology on display, and concerns the kind of flashy Vegas style magic acts that have become so popular in the last decade. Whilst Nolan’s film was actually structured like a magic trick, misdirecting you until the very end, Now You See Me is more about the entertainment side of magic and as such it succeeds admirably.

The film revolves around four magicians (Jesse Eisenberg, Woody Harrelson, Dave Franco and Isla Fisher), who are all summoned by a mysterious individual to an obscure address where a series of illusions are laid out. A year later, they have reinvented themselves as the Four Horseman, big time stage illusionists who climax their sold out Las Vegas show with a bank apparently robbed for real. As a result agents Dylan Rhodes (Mark Ruffalo) of the FBI and Alma Dray (Melanie Laurent) of Interpol are assigned to the case and tasked with finding out how they did it. However, the mystery proves difficult to solve even with the insights of the professional illusion exposer, Thaddeus Bradley (Morgan Freeman). What follows is a highly entertaining investigation into an increasingly bizarre set of stunts where nothing is what it seems. There are illusions, dark secrets and hidden agendas galore, as all involved are reminded of the great truth of the magician’s stagecraft: the closer you look, the less you see.

Now You See Me sets the stage from the very first scene, when Jesse Eisenberg’s Daniel Atlas performs a card trick for the camera, immediately establishing his character and grabbing the audience’s attention. After that the other three Horsemen are introduced, with each displaying their particular specialist illusions and skills. The appearance of the always reliable Harrelson is particularly funny, especially when he practices the art of mentalism - think Derren Brown and you’re on the right track. The film’s charming leads are one of its strong points, all the actors are likable in their roles and help deliver the film’s various illusions with a degree of believability. Jesse Eisenberg appears to have made the difficult transition from uber-geek to charismatic lead, playing the cocky Daniel Atlas to the hilt and delivering some of the film’s best lines. Whilst the majority of the cast are relatively young, skewing the film’s appeal towards its target audience, the presence of Morgan Freeman and, in a smaller role, Michael Caine as the Horseman’s financial backer, adds a degree of gravitas. Although given they both appeared in Chistopher Nolan’s Dark Knight trilogy and Caine was also in The Prestige, they’re an obvious reminder of that director’s vastly superior film.

Whilst comparisons are inevitable given the shared subject matter, the two films are very different and anyone going to see Now You See Me expecting an intellectual deconstruction of the magician’s art will be disappointed. Now You See Me is designed primarily to entertain and whilst there are genuine illusions in the film and even some explanations into how they were achieved, there is also a greater reliance on computer generated effects for some sequences. That’s a shame because having started the film with a genuine trick, there is a certain expectation for more of the same. The cast actually did learn certain tricks for the film, although some of the more difficult up close card work was performed by hand doubles. Instead the film changes tack halfway through, becoming less about the illusions and more about action scenes and chase sequences. Whilst these scenes are handled extremely well and there is often an element of trickery involved, the second half of the film might disappoint those expecting a bit more magic.

Of course given that Now You See Me is directed by Louis Letterier, the helmer responsible for Transporter 2, The Incredible Hulk and the remake of Clash of the Titans, the high action quotient shouldn’t come as a surprise. Needless to say Letterier handles those action scenes with great aplomb, in fact he could probably knock them off in his sleep these days, but he also orchestrates the magic shows with the same sense of kinetic energy. The constantly moving camera becomes a participant in the stage illusions, injecting every scene with a wonderful sense of excitement and energy. All this helps the film move at an almost breathless pace, jumping from one set piece to the next before a touching conclusion at a Parisian landmark that most people (outside of Paris) probably won’t be familiar with. The screenplay is by Ed Solomon, who wrote the original Bill and Ted movie, along with Boaz Yakin and Edward Ricourt, who recently wrote The Prince of Persia. The story, whilst fun and ingenious in places, isn’t quite as clever as it likes to think it is and the ultimate reveal of the mysterious instigator is rather obvious thanks to a simple process of elimination. Still there’s some great dialogue and a few cunning twists along the way, although it’s highly likely the plot won’t stand up to scrutiny on a second viewing.

However all that is largely irrelevant as the film barely gives the viewer time to question any possible plot holes before moving on to the next set piece. Now You See Me sets out to be a funny, exciting and entertaining piece of multiplex popcorn fare and you have to admire its complete lack of pretension in that respect. It’s to film’s credit that it succeeds in this primary goal and, in a year that has proved something of a cinematic disappointment, that is the film’s real ace up its sleeve.

The Closer you look, the less you'll see...

Now You See Me is an exciting and entertaining thriller that revolves around four magicians and a complex revenge scheme instigated by a mysterious protagonist. Jesse Eisenberg, Woody Harrelson, Isla Fisher and Dave Franco star as the magicians, who are collectively known as the Four Horseman. Michael Caine pops up as the Horseman's financial backer, whilst Mark Ruffalo and Melanie Laurent are the FBI agent and Interpol operative assigned to uncover their secrets. Morgan Freeman provides solid support as a magic debunker and director Louis Letterier stages the entire film like a slick Vegas show. His constantly moving camera injects the film with genuine energy and the likable cast keep the laughs and surprises coming until the film's somewhat inevitable denouement. Now You See Me sets out to be an enjoyable two hours at the cinema and in that sense it succeeds admirably, pulling an entertainment rabbit from its cinematic hat.