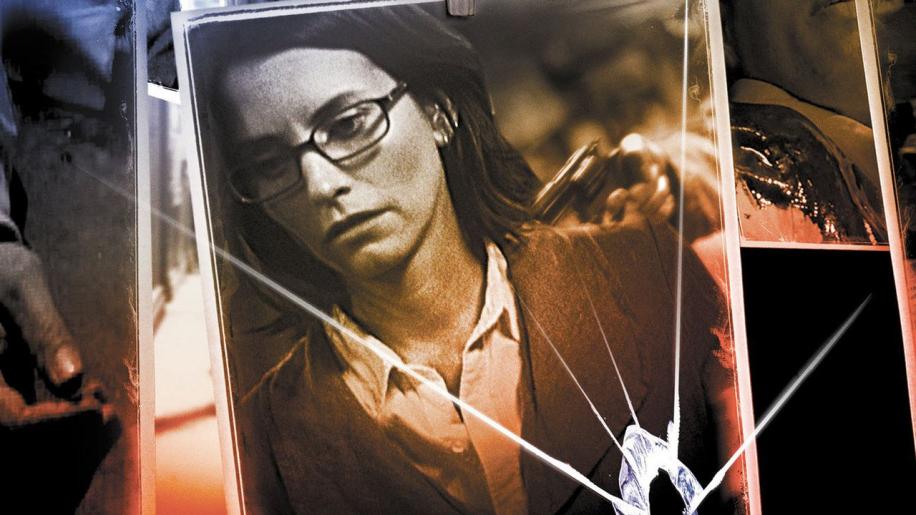 November is presented with a 1.85:1 aspect ratio anamorphically enhanced widescreen transfer that is quite a strange affair. Largely due to the 'reality' way in which it has been filmed (shot on mini-DVD camcorder), there are a great deal of problems associated with the picture quality, most of which were probably intended (or rather a natural side-effect of the chosen method of photography). The detail is reasonable at best, with softness almost throughout and a strange blurring effect that happens whenever objects move too fast on the screen (I have only seen this once before, in a similarly-filmed 'mystery' thriller). There is a little noticeable edge enhancement and a heavy smattering of grain running almost throughout. The colour palette is restricted also by the medium and plenty of the colours bleed. Irrespective of this, some of the colours are well represented and the dominating blacks look quite solid. November is presented with quite a slightly lacklustre Dolby Digital 5.1 mix, the dialogue coming reasonably clear from the frontal array, but often being muffled out either because they are mumbling or because other elements are swamping the voices. The effects are generally few and far between, the odd feeble gunshot - ring tones, creaking doors and the like being much more commonplace. The most distinct sound is the 'headache' high-pitched noise, also reminiscent of the like in Pi. The soundtrack often penetrates through to the rears, but overall the track is still quite underwhelming, only exhibiting mere moments that deserve the label 'six-speaker surround sound'. First up we get an Audio Commentary with the Director (and Editor) Greg Harrison and the Screenwriter Benjamin Brand, who talk about the narrative of the drama, the changes that were made after it was shown at the Sundance Film Festival and the amount of effort that it took in post-production to put the movie together properly. The Director takes the main stage for the duration, with the Screenwriter quite happy to just interject the odd comment here and there, normally relating the action to what he originally penned (which, by the sounds of it, was not all that detailed or comprehensive).

There is also a second Audio Commentary, again with the Director, this time paired with the Director of Photography, Nancy Schreiber. They provide a slightly more dry, technical affair, explaining little details like the colour scheme and the effect that was achieved by filming using mini-DVD camcorders. They discuss the low budget and limited resources, patting themselves on the back more often than not with their accomplishment. If you want to know all of the technical details of how this movie was shot, this is the commentary for you.

The Alternate Opening Sequence has a forced audio commentary by the Director and the Screenwriter, talking over the start of three minutes' worth of footage that provide a look at the original opening sequence that they designed and screened at the Sundance Film Festival. There is little difference apart from the background images and it is nothing particularly memorable - it certainly would not have significantly improved the movie, although the clichéd Seven-style flash-image approach that they adopted for the final cut was not much of an improvement.

A Conversation with Lew Baldwin is a nine minute chat between the Director Greg Harrison and his Composer and Visual Effects Supervisor, Lew Baldwin. Playing as more like a Making-Of, they provide a commentary to the behind the scenes footage, clips from the final movie and stills from the production. Fans of the movie will want to give it a whirl but I could not really see the benefit to it as it came across as more like just an extension to the original commentary - perhaps these two should have recorded a third track?

There are three Photo Galleries - Sophie's Portfolio, Jesse's Portfolio and Behind the Scenes, all pretty self-explanatory (The Portfolios are collections of the shots that you can see on the walls in the movie). All of the Galleries play as Slideshows only and easily the most interesting collection is the Sophie offering.

There are also Previews on disc startup, including the Cannes Festival drama Junebug and Thumbsucker, which are also available from the menu, where they are paired with Trailers for Heights, 2046, Yes, Beautiful Country, Oliver Twist and The Gospel. November is billed as an 'edgy, psycho thriller' when the full quote is probably that it 'could have been an edgy, psycho thriller'. It has some great ideas behind it, some fabulous concepts, but it is so poorly played out in terms of visual style, acting and direction, that the end result is just a trauma to endure. The transfer and soundtrack are just as lacklustre and disappointing, but there are a surprising amount of extras on the disc that will keep those who do like the movie entertained for hours. If you are one of them then you will probably find this a worthy purchase.