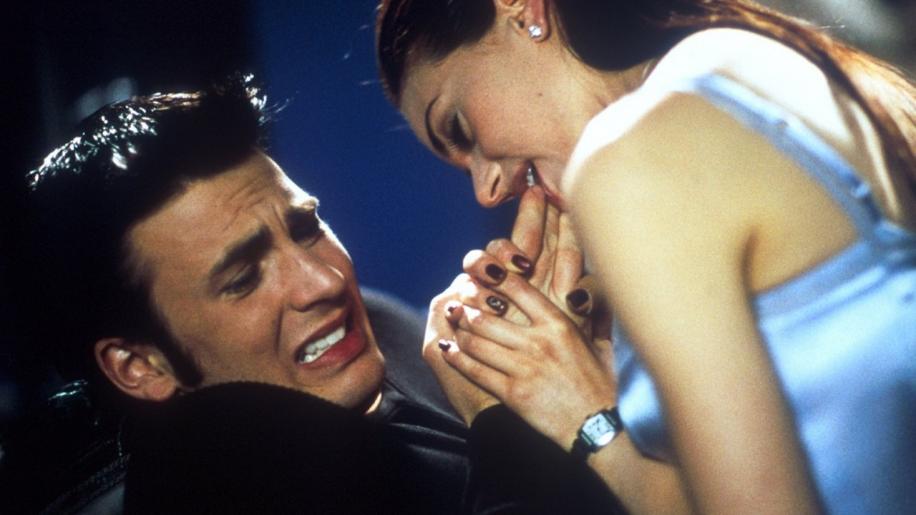 Presented in an anamorphic widescreen format, this is a bit hit and miss. On the positive side, colours are bold and vibrant, with no noticeable bleed being seen, black levels were fine, although not the best I've seen and I also didn't notice any edge enhancement. Finally, I didn't note any artefacts either, which is always nice. On the negative side however, it does suffer from grain and several scenes have dot-crawl evident quite clearly. I understand this isn't the highest budget movie and so on, but it could have had a better treatment. Still, overall it's average and certainly better than the last movie I viewed. Comedy movies don't really need a surround stage, unless it's an action comedy, which this clearly isn't. Rears are rarely and underutilised for the most part, only chirping up for ambience, or when needed for certain gags but at least they are more prominent than most comedy soundtracks I've heard recently. However the front side of things is fine, with dialogue being pleasant, natural and clear and never being drowned out, even during the musical number. LFE, well it's pretty much non existent, but then, were you really expecting it to be booming at all? As is the norm with any comedy, it's not going to be reference material, but kudos however for more that usual rear speaker usage. Sadly, it would appear that the only change to this disk from it's predecessor, other than the menus, is the movie. The extras, with the exception of the commentary and deleted scenes found on the original disk, are identical. So, having said that, let's get on with what's there anyway.

First we have “Schools In Session”, which is split into 3 sections, having said that it's a making of featurette. The first part is from script, script re-writes, casting and shooting and it runs for about 13 minutes. It's actually quite interesting, as I didn't realise that the director was the guy behind the Mission Impossible Cruise/Stiller parody. The second part of this trio revolves around the sets and costumes, which is ok, but nothing special, unless you've really got an interest in these two things. It runs for 10 minutes, which is fine as it doesn't overstay its welcome. Our final part of this section runs for 10 minutes and revolves around the gags and the dance numbers/choreography and again if it's your thing, you'll enjoy these, but if not, you may still enjoy it as you get to see how much work (on a tight budget) they got to work with!

Next up we have the making of the Marilyn Manson video for “Tainted Love” as well as the uncensored version. The making of runs for 5 minutes and elaborates on the movie briefly, as the stars/characters feature from the movie in the video itself. I think to surmise the video and making of, I'll let Mr. Manson say it in his own way “I just wanted to play around with stuff that we see everyday on MTV and turn that into my own thing. And also have naked girls and exploit them”. 'Nuff said.

The auditions montage is just that, clips of the actors/actresses auditions, which is ........interesting. It's short at 3 ½ minutes, thankfully. The Yearbook is a 6 minute featurette which is basically a photo gallery, but here's the twist, not all the photos relate to the movie, hence the title. Once is more than enough to be fair. Meet The Cast Promos, are clearly “adverts” for the movie, probably for MTV as they are that sort of style, where you can meet the “Pretty Ugly Girl” or the “Bitchy Cheerleader”. Actually some are quite funny, so definitely worth a look.The Test Your Teen Movie IQ section is basically a simple Q&A to see if you know your teen movies or not, it's simple to play and harmless enough. Joel Gallen's “Car Ride” is his first movie and lasts for 4 minutes, features Jenny McCarthy, a serial killer and in a supporting role, her cleavage. It's clearly an MTV short, but it did raise a smile at least. Lastly we have trailers for the movies D.E.B.S, Guess Who, 50 First Dates, Kung Fu Hustle, Layer Cake, Hitch, Urban Legends:Bloody Mary, Boogeyman and The Cave. Again, I reiterate this is not the greatest movie, nor does it have great actors or even great cinematography, but when all is said and done, you should enjoy this movie, more so if you like the “Teen” genre. Besides, seeing the Cruel Intentions “Kiss” scene with someone old enough to be your granny has a car-accident-esque feel to it. You don't want to look, but you have to for gross out humour sakes. If you've got the original version, nothing here is going to necessarily swing you to double dip, but if you've not seen it and like movies such as American Pie or Ferris Beuller, it's worth grabbing or viewing at the very least. Fun stuff.