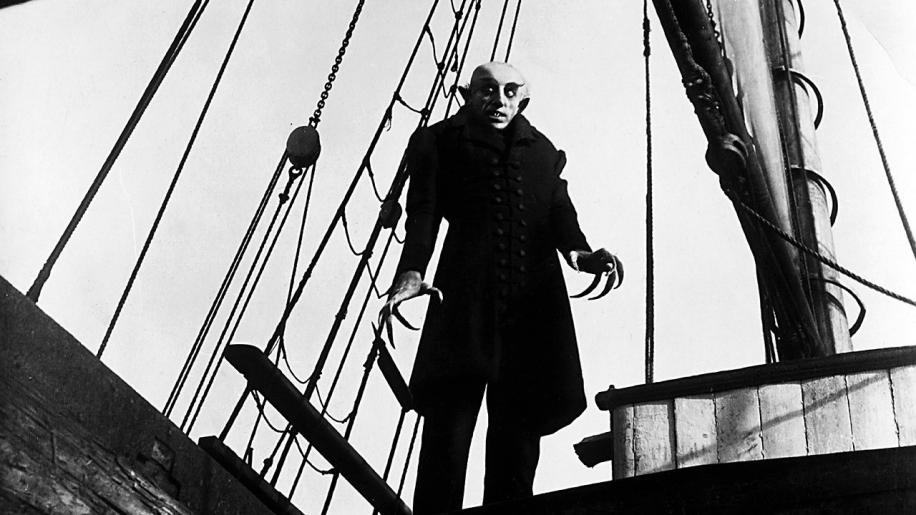 Kino has provided a full screen 4:3 aspect picture with an average bitrate of 7.40 Mbps. Let us remember that this film is over eighty years old and was destined for destruction, it is a miracle that any prints have survived at all. With that in mind, the picture is littered with print damage and film grain. However, the picture is remarkably sharp and the colour tints bold and striking. Brightness and contrast are for the most part well set, darks are dark, but sometimes rather to dark. It has been remarked upon that the degradation of the film mirrors the corruption theme of the film, a reasonable hypothesis, but one I don't agree with. Yes, the film stock is in a poor state, but was never intended to be, even so it is in remarkable quality considering its age and history. Of the various copies in existence I believe the Kino print to have one of the best pictures, it is certainly sharper than my Eureka copy, if a bit darker, though I don't mind this because, after all, Nosferatu is a creature of the night. Digitally there are no compression problems, neither is there any edge enhancement, of the clean up's of the film this one is one of the better, and I don't think it will look any better than presented here. There are two musical Dolby digital 2.0 stereo tracks, the default one is by Donald Sosin and uses synthesizer, pan pipes and a woman's voice amongst other things. I found it rarther tedious and though the lighter moments fit with the lighter parts of the film, during the darker moments it is very out of place. The other, by Gérard Hourbette and Thierry Zaboitzeff, is far more atmospheric using wind effects, occasional industrial noises and strings has a far deeper sound, conversely sounding excellent for the darker moments but not terrible subtle for the light, plus is isn't really 'musical'. Both, however, contain some decent stereo effects given that the film itself has none. Both fit reasonable well with the visuals, of the two I prefer the second, but overall would have preferred a full orchestral score, can't have everything I suppose. First up there are short snippets of other films by Murnau, the wear and tear on some showing there age somewhat. The films are; Journey Into the Night (1920), The Haunted Castle (1921), Phantom (1922), The Last Laugh (1924), Faust (1926) and Tabu (1931). Tabu was Murnau's last film. Of particular interest is Phantom showcasing some spectacular visual flare and camera trickery and Faust with its many miniatures. There is a scene comparison of the meeting with Hutter and Orlok with Stokers' original novel, Henrik Galeen's screenplay, the film except and a Mercury Theatre radio dramatization of Dracula from July 1938 performed by Orson Welles, though it is in a perilous state, barely audible and thick with little treble. Stokers novel is particularly hard reading too, just a sign of how books are written nowadays.

There is a photo gallery of production and advertising material as well as film shots. These offer a tantalising glimpse into how the film would have looked in its day.

Finally there are two easter eggs found on the scene comparison page, highlight Stokers novel or Galeen's screenplay and push right on the remote to play trailers for Dracula (1931) and Mask of Dracula (1935) respectively. Without Nosferatu it is safe to say the horror genre as we know today might not exist; its influence can be traced through time to every horror film after it. Thanks to the Bologna restoration modern audiences can now appreciate the full scope of this horror masterpiece. It is one of my favourite films of all time, not only for itself, but also what it stands for. A landmark film deserving of its place in the hall of the giants.

As a DVD Kino have produced the best quality picture as is feasibly possible, between the three discs out there, this one seems to be the best, even if the sound tracks are somewhat less than desirable. Extras wise there is little to get too excited about, but with a film this good, who needs extras? Any self respecting horror fan owes it to him or herself to seek out Nosferatu and see where it all began, horror at its most horrible.