Probably the best phone to bear the Nokia logo. Ever. 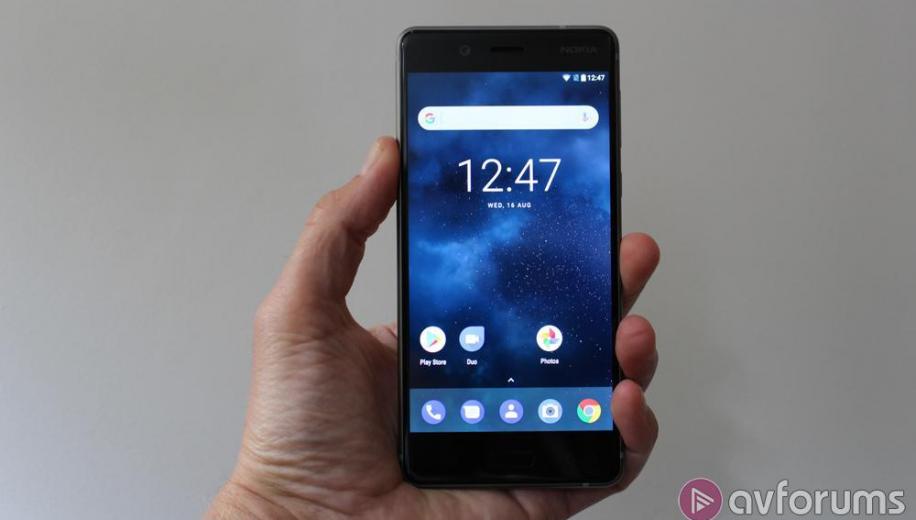 What is the Nokia 8?

The year 2017 is the year of Nokia’s renaissance. In February, HMD Global, the Finnish company with the naming rights to put Nokia on its smartphones, announced five new phones. One is a reworking of the classic feature phone the Nokia 3310, the others are Nokia’s first Android smartphones, named the 3, 5, 6 and 8. We're taking a look at the Nokia 8, which is the first flagship from the newly revivified company and it’s a well-priced, high-specced Android phone. The design is a big part of this phone’s success, and is striking enough to quickly capture the attention. Most phones are black oblong screens with flat aluminium or glass backs. The difference here is a curved back with smooth, slimmer edges which mean you can roll the phone easily through your fingers like a worry stone. It’s exceptionally comfortable in the hand. The screen has gently curved edges, too, as is the fashion now in mobiles, and this adds to the comfort.

The narrow bezels on the long sides of the phone also help, as the 5.2-inch display is tightly enough packed to make for a slim handset. But, and this is the least successful part of the phone, the bezels on the short sides, the forehead and chin of the phone, are big. Way bigger than on other company’s flagships, and this may come to make the phone look dated quickly. I asked Nokia about this and was told that the company wanted the fingerprint sensor on the phone’s front – which I’d agree is the best place for it – so that required space at the base of the phone. And I was told that the priority up top was to put a cutting-edge selfie camera in. Fair enough. And crunch time will come, I’d say, when the next slew of iPhones is released. The bezels are no bigger than on the iPhone 7 Plus, and the Nokia is a lot cheaper. If the next iPhones include a successor to the 7 Plus with similar bezels, that is the handset with which to compare this one. It’s likely to be noticeably cheaper, too.

Beyond that, the phone’s colour is worth discussing, too. It comes in four shades: matte silver, polished blue, matte blue and polished copper. The copper is the real standout, though that glossy polished blue is highly attractive. Both the polished surfaces attract fingerprints, although not to the level I’ve found on some other glossy phones. Nokia has always had a great skill when it comes to choosing colours – only Apple and HTC come close. And it’s pretty brave to produce a flagship and leave out the obvious shade: any colour so long as it’s not black. The display on the Nokia 8 is 2560 x 1440 resolution – that’s 554 pixels per inch – which is a much higher resolution than Nokia’s previous screens. It looks amazing as well, with rich, detailed and brightly coloured images – even though it’s an LCD screen, not the OLED display favoured by Samsung’s S8 and rumoured to be on at least one version of the next iPhone. What’s the camera like? That seems to be the number one question regarding phones these days. So, no wonder Nokia has gone all-out here. Its recently announced continuation of a collaboration with lens-masters Zeiss sees its first manifestation on the Nokia 8. The Zeiss input seems to go much further than just the glass, though. Zeiss has told me that its involvement includes the software and more. And certainly, the excellent camera interface is just about the only part of the OS that isn’t stock Android.

There are two rear cameras, both 13-megapixel resolution. Currently, there are several ways to implement a two-camera set-up on a smartphone. All are primarily designed to get around the fact that an optical zoom is impractical on a phone – it makes it unattractively thick. On some phones, like the Galaxy Note8 and iPhone 7 Plus, a wide-angle and telephoto lens are paired to give, effectively, 2x optical zoom.

The other popular system, favoured by Huawei and now Nokia, is to match a monochrome sensor with a colour one. Both are 13-megapixel sensors. The idea is that the monochrome sensor, able to pull in more light more quickly, can fix the shot with pristine sharpness, while the colour sensor works to provide accurate colour reproduction. The colour module has optical image stabilisation to help compensate for not matching the speed of the monochrome sensor.

You can choose to shoot with both sensors together, which is the default option, or to shoot black-and-white images with the monochrome sensor only, or on the colour sensor alone, though I don’t see any benefit to that over the combined mode. All very well, but what are the photos like? In a word, they’re fantastic. The camera shoots with very little shutter lag, delivering sharp, rich, contrasty images in average lighting. The software is extremely easy to use and has enough sophistication to suit most shots (HDR, Flash and timer controls are all easily accessible) without bamboozling the users. The camera launches quickly from standby with a double-press on the power button to help you catch the moment.

And I haven’t even told you about the 'bothie'. This, to be honest, is a gimmick, but it’s a good one. The 'bothie', or Dual Sight to give the technology its formal name, is the result which occurs when you choose to shoot with front and back cameras at the same time. Nokia is not the first to feature this, but this is easily the most slick and intuitive execution of the system. The software seems to know how to frame both shots pretty well, and it means you can achieve fun results, like seeing your favourite band on stage and your reaction, or the moment you propose and your intended’s response.

It works both with still images and video. It works seamlessly and well, but there are disappointments. According to the mode of shooting you’re in, the button to activate bothie or front or back camera only moves around, so it’s easy to press the wrong button. And sometimes you want the self-facing camera to be on the right, not the left, of the shot, or vice versa. There doesn’t seem to be a way to make this happen.

The cameras, all three of them, can shoot video at up to 4K resolution – oh, at last, 4K video selfies!
Video and stills playback look particularly good on the phone’s screen, though obviously it’s not a 4K display. There’s also a bokeh effect, a feature that seems de rigueur on smartphones now and it’s not bad.

There’s a powerful chip in the Nokia 8, the Qualcomm Snapdragon 835, a good graphic chip and 4GB of RAM. It all adds up to a nippy performer that’s never slow or sluggish. Part of that is down to the fact that this phone has a version of Android which, camera software apart, is so close to Google’s plainest, purest version that it can run in a pretty much optimised fashion. It also means that now that Android Oreo has been released, it should be one of the first phones to receive it apart from the Google Pixel. Even so, that could be any time between September and the end of the year. Incidentally, the Nokia 8 uses a conventional headphone jack, unlike some of the latest phones from HTC and Apple.

Battery life on the Nokia is more than passable. As always, the best advice is to charge nightly, but it will see you through a full day with ease. Nokia has made much of a bespoke cooling system, though I did sometimes find the phone warmed up quite a bit. To be fair, this was only when I was in a remote village in Italy when, quite possibly, searching for a signal tower was a constant challenge.

This is Nokia’s first phone to include a USB-C connector instead of microUSB, something that was noticeable in its absence on earlier Nokia phones this year. That means two things: all your old charging cables are redundant now and that charging, with the right USB-C charger, is very quick. In other words, if you plug it into your PC to charge it’ll do so slowly but with a decently powered charging plug, it goes like the wind, reaching 50 per cent charge in under half an hour.
The Nokia 8 is an impressive phone that is sure to confound those who have written off the brand

This is a very strong entry from Nokia, confounding those who had written off the brand. The design is very strong, not least because the design team includes guys who have been with Nokia for over 10 years and have guided the brand’s hardware identity through the Microsoft years and the Nokia years before that.

The curved back and edges make it fit the hand beautifully. It looks good and feels great, and even the large top and bottom bezels around the screen can be forgiven. For now, at least. The camera is terrific, with the 'bothie' feature proving a fun gimmick. Beyond that, it’s a fast, effective snapper that benefits from Zeiss's glass and knowhow. And this is a phone that holds its own among other flagships with fast, responsive performance, decent battery life and an attention to detail that will please.

This autumn sees big releases from companies like Samsung, Google, Sony and, above all, Apple. With most of these, apart from the Note8, still to come, it’s hard to know exactly how well the Nokia 8 will perform, but it’s one of the best phones around right now and, I would guess, will hold its own against most comers, new top-of-the-range iPhone perhaps excepted, for some time to come.