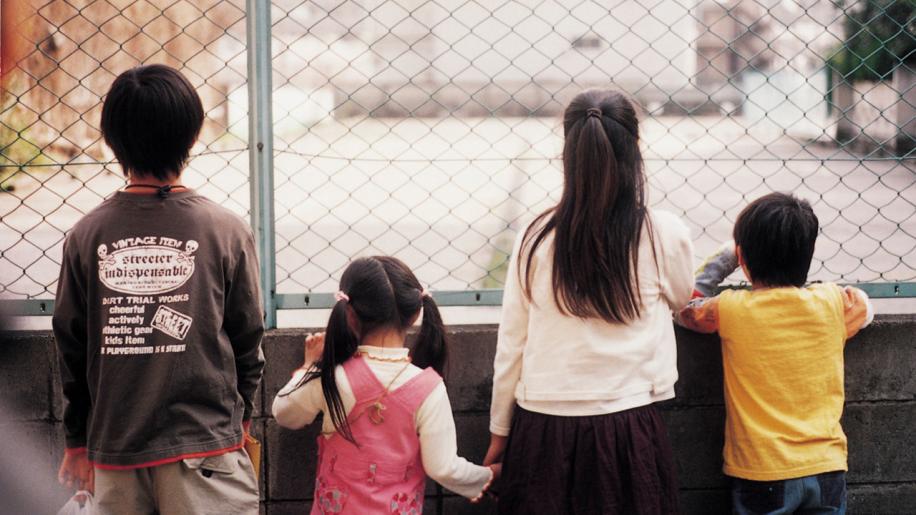 Four children live with their single mother in a small Tokyo apartment. To rent the flat, she didn't let on about the size of her brood. Her landlord only knows of the existence of the eldest, 12 year old Akira. The others are hidden from view by their mother and spend their days at home studying and playing quietly. Akira looks after the children most of the time, as the wayward mother often goes off drinking with men. One day she simply leaves a note with money and fails to return. The children are left to survive on their own. A fight for survival that nobody knows.

Based on a true story, Writer and Director Hirokazu Kore-eda has made a compassionate film that feels very intimate. His stripped, simplistic style of filming makes the children's plight all too real and it genuinely tugs at the old heart strings. None of the performances disappoint. The young cast are quite splendid. Fourteen year old Yuya Yagira is the lead actor and is in practically every scene. His wise-beyond-his-years character Akira has the weight of the world on his shoulders. Shot over the course of a year, primarily in the same small apartment with a non professional cast, the director creates an unusually 'natural' atmosphere where at times you feel as if you are an observer in the flat. indoors, he often keeps the camera still and low as if at child height and keeps showing close ups of the children's limbs and sprawled feet, yet the world outside is shown busy and boisterous. While you are still aware you are watching a feature film, Kore-eda's directing does achieve the immediate and spontaneous feel of a documentary. The degenerating circumstances and the relationships of the siblings are scripted and portrayed without melodrama. The mother is not shown as a monster but as a big child herself. You will stare open-mouthed at her audacity and immaturity when, having left her children alone in a flat for weeks and just about to leave again, she exclaims to her disappointed son, "May I not be happy?", chastising him for being selfish.

Some things are skipped over by Kore-eda, as over the course of several months I feel four young children, one a toddler, would have far more bad scrapes and illnesses than they are shown to have. They all seem unusually well developed, both physically and mentally. Also, the fact that the three children were essentially imprisoned indoors by the mother, being held back from school, before she abandoned them, is only briefly mentioned. The three children left to pass their days in the flat, one girl almost the same age as Akira, don't get enough screen time. You don't really get to know them as individuals. Their struggle is barely focused on compared to Akira's, and the three youngsters would be far more noisy and inquisitive about the world outside. It's in their nature. Surely, there would be far more need for Akira to seek outside help. Akira is the 'adult' figure yet he is still pre-pubescent! Having said that, the fear of the four of them being split up by the authorities is shown to be never far fom his mind. The image of a friendless Akira wandering the streets, scruffy and starving, without anyone to talk to is one that lingers.

Nobody Knows is a long film. Its main fault is that it's pacing is too leisurely. The director is obviously showing you the tedium of the kids' everyday lives, but it takes too long getting to the substantial events that shape the story. However, you are always compelled to keep watching, wondering where it's going to take you; and yes, you do feel a constant sense of anxiety, anger even, about what is happening to the children. It might be a Japanese society's indifference that is portrayed here, but it could well be any countries. Tragic and sad, this is a film that you would have to be very hard hearted not to be affected by.