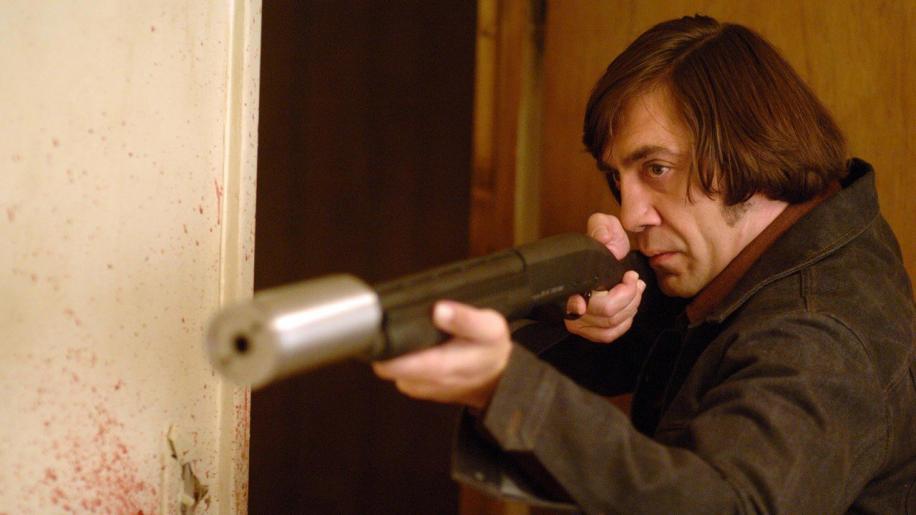 Every once in a while a film comes along that grabs the movie fraternity's attention and gets them all to sit up and listen. When it's directed by the Coen Brothers with both Joel and Ethan behind it, you will know all the more it's simply going to be an intelligent, well thought out and stimulating affair.

No Country for Old Men is based on the novel by Cormac McCarthy and his unflinching style has been portrayed through to the film in quite stark and literal style from it. Even the title succinctly describes what the movie revolves around. This film won four Oscars at the Academy awards including Best Picture as well as Best supporting actor for Javier Bardem, so surely it's got something special about it right?

The movie is set in the 1980's in West Texas in the Lone Star State and filmed in a 2.35:1 ratio which captures the parched bleak backdrops perfectly. Near to the Mexican border where drug trafficking is becoming more and more rife the times are clearly changing and what of the old is definitely not of the new.

Ed Tom Bell played by Tommy Lee Jones is an ageing sheriff who is trying to police against this new wave of crime and all the associated problems that it brings. The story is in essence about his gradual detachment from what the times have become as well as his incomprehension of the progression of mindless crime. Let's face it we all experience cases of romantic nostalgia, you know, when things used to be so much better and oh so much easier than what they are today? Of course they never were as good as what the memory recollects. Youth also has with it a sense of irreverent conditioning that age and experience find increasingly difficult to disregard. Tommy Lee Jones portrays the inner conflict of Ed Tom Bell quite superbly and the character oozes compassion as a result.

Now the movie has three simple draws to it. Think of The Good, The Bad and The Ugly. Yes, just like the original spaghetti western you've got three visceral characters on offer here all on a simple round-robin chase. It's fascinating to watch and you'll be mesmerised for sure. However, a word of warning to the wise, this movie is a bit of a smouldering fuse so kerb your expectations and your patience will be handsomely rewarded. It's also filmed in quite an anaemic style where colours appear washed out, parched landscapes and backdrops in what would appear to be of a western vain. The film is quite grainy in parts, soft in focus and the black levels are surprisingly not that good. The soundtrack is also nowhere as engaging as it really should have been. Technical frailties aside, it's actually the content of this film as to where it's at.

Llewellyn Moss (Josh Brolin) plays a hard, gritty Vietnam veteran. He's worldly wise and he takes no shorts or thrifts from anyone. Out hunting for deer in the deserted land, he stumbles across a number of bullet ridden jeeps, heaps of dead Mexican bodies in what clearly appears to be a drug related gun fest from a deal gone badly wrong. The Mexicans appear to have been the suppliers of the drugs and the Americans the buyers. Sifting through the carnage he finds a half dead Mexican dying of thirst and a pallet load of Heroin. Not interested by the narcotics or the dying man he's astute enough to realise where there was a serious deal happening there had to have been some serious cash involved. More so if the deal had gone wrong, there was also probably a last man standing who would have been left holding the stash. It turns out in this case that it's $2m in a pilot brief case which he finds not too far from the scene. Lucky day Mr Moss, you went out hunting for deer and you came back with enough to buy some serious beer. No witnesses, no evidence, no questions to ask, no nothing but a bag full of loot to take away.

Finders' keepers I'd say and it would be fair to say that at that point Moss could and should have simply closed the chapter. He'd got the money, he was back at home and common sense would dictate that anyone would simply check it over and stash it away somewhere safe. However, there would be no story if that was to happen eh? His conscience eventually gets the better of him and he feels he simply has to go back to the scene to attend to the half dead Mexican. The story starts proper.....

On his return to the desert, he's got company. I imagine a missing $2m and a load of Heroin attracts bad company in anyone's book and Moss really should have known better. Well he clearly didn't and so the rabbit chase begins. Initially it's all the Mexicans that are after him but the trouble seriously compounds when they hire a man by the name of Anton Chigurh (Javier Bardem) who then enters the fray. You know it's serious when you see his haircut. Anyone who's having a bad hair day like that is going to be looking to take it out on someone for sure. Whatever you do, just don't get in his hair.

Anton Chigurh (pronounced Shergar not Sugar) is an assassin with serious mental issues. It would be fine to end it at that but this guy is actually nothing short of being a complete nutter. Completely devoid of any emotion or compassion, he's an animal. The guy is out to kill, is going to kill and nothing is going to stop him. An incessant and relentless killing machine rather similar to the model T-1000 terminator but with a chaotic mental disorder alongside. Add to that the fact his weapon of choice is a compressed air cylinder and an air gun, you have to seriously wonder which asylum this guy escaped from. He certainly wasn't let out on a day pass that's for sure!

“What business is it of yours where I'm from Friendo?”

Now one of my favourite scenes of this movie is early on when Chigurh is at a Gasoline station and he has a conversation with the pump attendant. It's fascinating and it's truly superb. It's also the only real insight you'll get into his character. We've all had those moments in our lives where we've said something quite innocently to someone and it's been taken out of context and the conversation picks up a degree of un-comfort as a consequence, right? Recall Goodfella's where Joe Pesci lays into Ray Liotta for calling him funny, instigated by a simple, jovial innocent comment? Well, this scene is on a par with that. It's an absolute classic.

Now from hereon the movie picks up pace and the round robin rabbit chase becomes mesmerising. It's edge of the seat stuff. Not in explosive action form, no not by any stretch of the imagination. You always know what's coming, so there's never any surprises in that respect. What is astonishing is achieved through the level of attention to detail that the Coen's have mustered. The inevitable events fall into place so fluently and naturally that the whole thing hangs together with immense cohesiveness. The other fascinating thing about this movie is that the three principle characters never meet each other. Ed Tom Bell never catches up with neither Chigurh nor Moss. The Sheriff's intuition of what is going on between the other two remains spot on but for the main part of the film his character bears little direct involvement.

“Decided to make you a special project of mine, you ain't gonna have to come look for me at all”

Chigurh and Moss on the other hand is an encounter that brews with absolute delight. Moss realises Chigurh is good but is confounded how he consistently manages to keep tracking him down. It takes him a fair while to actually realise that someone had left a tracking transponder in the brief case amongst the money. Twists and turns, close shave encounters, a slow build of a film of sweat all over your body is guaranteed. You think it's as straightforward a chase as that? Then all of a sudden it takes on a completely different tone when Moss decides that rather than be the one being chased, he's actually going to start doing the chasing.

Now the movie is not without its criticisms. It does have two major flaws.

Firstly there are a number of characters that enter the story and leave as abruptly. Whilst their inclusion doesn't detract from the story, they also add very little. Take Carson Wells (Woody Harrelson) who plays a bounty hunter hired to track down Llewellyn Moss and the missing money. He's obviously au fait with Chigurh and his tactics but is confident enough to be able to handle the both of them. The fact is not only is he able to track down Moss within 3hours of being on the case he also locates the money from a rather obscure location? It's a little bit far fetched and his character is disposed of in as hasty fashion.

Secondly and more disappointingly is the ending of the film. I can only imagine either Joel or Ethan Coen nodded off at this stage and induced deep sleep into each other. The last 20 minutes of this film are utterly pointless. It's a 122mins feature but it really should have ended at 100mins. At that point the story is done and dusted with precious little to add beyond that. In actual fact I would go as far as to say that the last stretch actually detracts quite substantially from the movie.

Nevertheless, all in all it's a fantastic film and the three lead roles are played superbly. Josh Brolin was brilliant and Javier Bardem played Anton's character immeasurably well. Tommy Lee Jones delivered one of his finer and intellectually aware depictions of a character. No Country for Old Men is destined to become a cult classic and comes as recommended viewing.