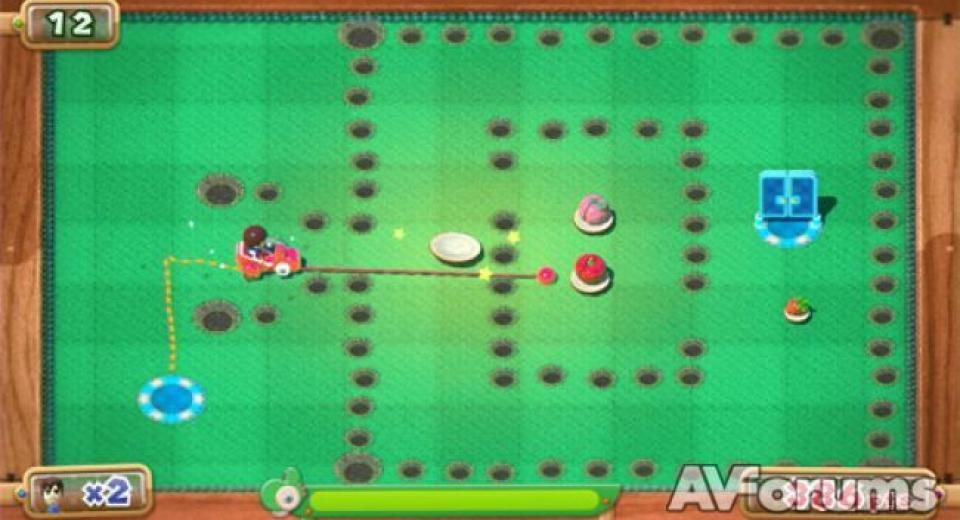 In a move akin to the bundling of Wii Sports with their previous home console, Nintendo have released the Wii U with a first party game that looks almost solely intended to show off the new control method everything is built around - that swish box of tricks that is the GamePad.  The joys of motion control were perfectly suited to a sports title, due to the accessible appeal of athletic events, but Nintendo Land has a tricky task ahead; how do you highlight all the nifty features of a tech heavy Swiss army knife of a controller and keep things simple?

Well the answer is to scale every task down until it’s a mini-game and build your title around that - hence Nintendo land, a fairground of twelve attractions, each with a subtle twist that should help you get to grips with the GamePad a little better and each with a uniquely Nintendo-branded theme.  On paper it’s the perfect dip-in and dip-out “look what my new console can do” disc, which begs the question why it wasn’t bundled with all SKUs. The mini-games are split into three groups: Solo attractions (1 player), team attractions (1-5 players) and competitive attractions (2-5 players).  The five solo attractions may look like the meat of the game but due to the very simplistic nature of them, you’ll soon realise they are merely the pickle in this Nintendo burger.  Still, they’re a good place to start.

Yoshi’s Fruit Cart is a good advertisement for getting the kind of dual screen gaming that made the manufacturer’s handhelds such a success translated onto the home console scene.  It’s a stylus event whereby you must navigate the cuddly dino towards fruit and away from obstacles, with the hitch being that, although the maps are visible on both screens, the line of his path must be drawn on the GamePad, whilst the important details of the map can only be seen on your TV.  Different patterns give you a marker to get your bearings, but moving objects and progressively trickier courses make things more interesting.

Balloon Trip Breeze is solely designed to remind you of the mic in the GamePad and that it can be put to inventive use.  Blow on it and you’ll create a gust of wind to carry your on-screen character past obstacles and enemies.  It’s a pretty side-scrolling affair but screams novelty factor. Similarly, Captain Falcon’s Twister Race is a gyro-inspired blast of F-Zero, whereby you hold the pad lengthways and vertical, tilting it to steer.  It’s useful to be told when to look at which screen, but the use of the controller in an upright position, when holding it normally would feel more like a wheel, seems odd.  You’re also reminded that there’s a camera to be utilised, as your gurning face beams out from the screen, deep in concentration whilst you veer around the tight corners.

Donkey Kong’s Crash Course is a series of 2D vertical courses for you to navigate a small - and fragile - three wheeled vehicle of sorts to the bottom of.  Once again you tilt the pad, but beyond the basic aesthetics having a DK aura, there’s nothing here that hasn’t arguably been done better by LittleBigPlanet, and the faux hand-drawn kitschness of it all doesn’t help the comparison.

It’s not all classic Nintendo themed offerings though, Octopus Dance is your basic rhythm repetition game with a dancing skin.  Hold the GamePad upright, flick the analogue sticks and shake the pad to get your avatar to recreate the actions of your instructor.  If that’s not your bag then the final solo attraction - Takemaru’s Ninja Castle - may well be.  As showcased on numerous TV ads, this shuriken throwing shooting gallery is a good indicator of how well the GamePad tracks fast swipes of the finger.  It gets hectic fast and the screen is too busy for there to be any real method in the madness but it’s at least a perfect quick blast of bowling alley arcade fun. Team attractions are the first sign that multiplayer is the heart of Nintendo Land, but there’s a caveat, a big “what the?” lurking here.  The Wii U boasts network features, but the console manufacturer is still dragging its feet somewhat as the multiplayer games here are all local based.  You can see your friends playing it whilst you are, but unless they’re driving to your house then you’re on your Tod I’m afraid.  Nintendo - with all their Wii profits - are still partying like it’s 1999, pre-broadband and all.

The Legend of Zelda: Battle Quest is the standout team attraction, capturing the essence of the source material nicely, thanks in no small part to the music and audio cues.  You can take on enemies by choosing either sword or bow, and using the GamePad’s gyro to look around the environment, aiming the controller beyond the periphery of the TV screen, quickly becomes intuitive.  The swordplay mimics the Wii’s use of the Wiimote, being both simplistic and strangely satisfying.  If the main area-based slash/shootathon fail to create sufficient pressure, being that the on-rails nature of it all can be halted and enemies picked off more leisurely, then the Time Attack mode injects a bit of urgency.

Pikmin Adventure and Metroid Blast can also manage up to five players, but as with Zelda the more is not necessarily the merrier as things are weighted towards the holder of the GamePad to get the most out of the experience, as the Wii remote activities will be instantly familiar to most and in all honesty a bit old hat.  The mixing of two control schemes to partake in different activities is what adds the spice, particularly in Metroid Blast where the splitting of land and aerial combat offers some great variety and hectic battles. But frenetic action, with numerous modes to choose from, against some very basic AI - designed to simulate the linearity of a fairground attraction’s movements - is fine, but it’s the competitive multiplayer where Nintendo Land really comes alive.

Gather four friends, as many Wii remotes, and launch Luigi’s Ghost Mansion to see what this Wii U tech demo-cum-launch title has to hint at regarding the console’s future.  The GamePad wielder acts as a ghost in the mansion, whilst those with remotes are the torch-shining scaredy cats trying to survive the spooky goings on.  The twist being that this is an asynchronous multiplayer experience where only the player viewing the GamePad screen, acting as the ghost, can see the ghost’s whereabouts.  It’s a great slice of cat-and-mouse where a flash of lightning may reveal the ghost’s location and the hunter then becomes the hunted, hounded by flashlights that can sap his otherworldly life-force.

Mario Chase is exactly what you’d expect given the title: the GamePad holder acts as Mario and must evade capture.  The arena’s are colourful but not wholly instantly identifiable as being from the little plumber’s universe.  It’s sparse with a couple of players, though the patrolling Yoshis help out, but with four it’s closer to the madhouse it’s intended to be. The final game is Animal Crossing: Sweet Day which is basically another variant on the chase theme, this time with the saccharine social game as its aesthetic inspiration.  There are a couple of twists, such as the GamePad user being able to control a couple of guards and the chasee needing to deposit items, but it ultimately plays out in a similar, although less exciting, manner.

Taken as a whole Nintendo Land appears to be the perfect example of a variety filled party game, but with the single player elements failing to offer enough longevity - even with an in game currency that can be used to purchase/win items for your park - and the competitive multiplayer having too few attractions, it feels slightly disjointed.  The highs, most notably Luigi’s Mansion, feel positively timeless, however they rely on other players’ input, and without online play it makes the lows of filler material such as Octopus Dance all the more noticeable.

Pleasure at the fair ground

Nintendo Land isn’t quite the Wii U’s answer to Wii Sports as motion control was far more accessible and saleable a feature.  As far as launch titles that showcase the technology they utilise go, it arguably sits far closer to the DS’s WarioWare: Touched; a fast frenetic bundle of mini-games, perfect novelty value but ultimately an experience that can’t last as it’s too shallow for the solo gamer.  The activities lack the appeal of sports that are recognisable, as such it relies on Nintendo skins and actions that - once the console is in full flow with decent titles from developers that have gotten to grips with it - should be commonplace and ultimately bettered.

If designed solely as a multiplayer game, with the abundant attractions all of the same standard as Zelda: Battle Quest or Luigi’s Ghost Mansion this would have been nigh on perfect, but as it stands Nintendo Land seems to be an extremely good technology seller first, following the everything-including the-kitchen-sink approach, and aims at being a focussed must-have launch title second.  The result is furious fun with friends weighted against the initially interesting but in the end unengaging solo attractions.