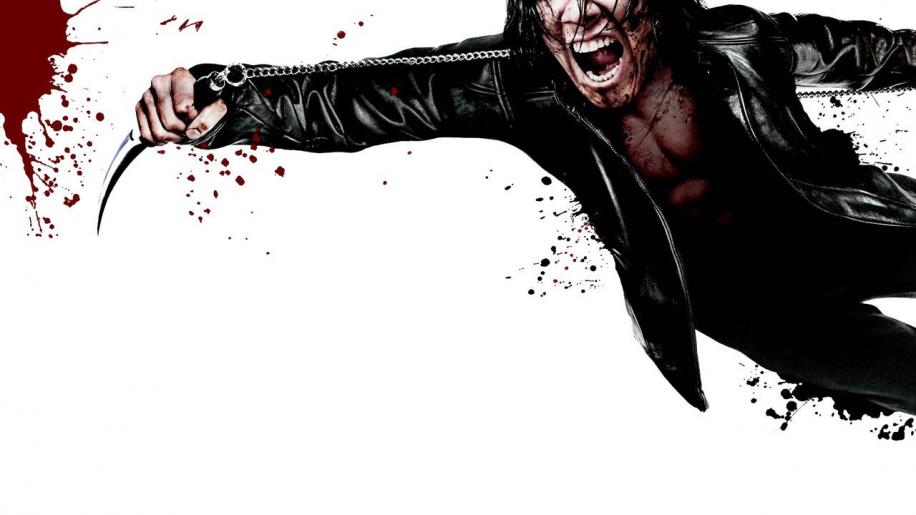 Guilty pleasures - we all have them and so few of us seem to readily admit to their existence. In filmic terms, audiences will frequently proclaim a love for Bergman and Truffaut, yet no one seems to have ever seen, let alone enjoyed the literal deadpan lowbrow comedy of Weekend at Bernie's II or the camp horror of Leprechaun 4: In Space. Occasionally we are allowed to disassociate cinema from art though and dive headlong into the depths of thoughtless imagery and two dimensional scripting. The Wachowski brothers managed such a coup in the eyes of many when they brought the classic Japanese manga and anime Mahha Go Go Go to the screen in 2008 as Speed Racer. A live action flurry of retina scorching colours and cartoonish characterisation, it showed just how a guilty pleasure should be constructed. Given my appreciation of the aforementioned title, my interest was piqued by the production tag team of the siblings' latest offering - Ninja Assassin. Could it be another pleasingly deniable entry into many a Blu-ray collection, dismissed sheepishly with the rehearsed line “ahem, that was given to me by someone....I haven't watched it yet”?

It is worth noting that this isn't solely a Wachowski brothers production, with both Joel Silver and Grant Hill being onboard, but it is hard to shake the feeling that they are the driving force, especially considering the director, James McTeigue's only previous effort was the Wachowski produced V For Vendetta (2005). The very title conjures up just about everything you need to know about the film, being that it is equally comprised of the themes of ninjas and assassins. Unsurprisingly, little in the way of genuine history gets in the way of either component though, as a simplistic plot is put into motion and then carried forward by little more than mindless violence for the duration of the piece. Central to proceedings is Raizo (played by South Korean signing/acting superstar Rain). He is an orphaned child, raised by a clan of brutal ninja assassins, destined to be trained in the ways of killing and then sent forth to do his master's bidding. It turns out that young Raizo wasn't the most willing of pawns and, rather than commit himself to a life of unscrupulous slaughter, finds within himself a softer centre and decides to turn his back on such ways. Now this wouldn't be much of a film if he were greeted by his peers with a slap on the back and a bunch of flowers, and true to form they instead try to kill him. So far, so generic.

If all this starts to sound a little familiar, it hasn't gone unnoticed that there is a touch of similarity to the 1995 live action adaptation of the magna of the same name - Crying Freeman. Then again, the premise of a reluctant assassin hunted down by his former trainers and colleagues is hardly an idea that anyone can claim holds much originality or has a single identifiable genesis in film. No, what we have here is a well worn and simplistic notion that will act as a springboard for the main draw of Ninja Assassin, the action. It is hard not to be reminded of a Dulux advert wherein a man repaints his entire room in crimson hues within a few minutes; such is the level of bloodletting on display here. Limbs are severed and fly around like confetti at a wedding, whilst arterial sprays act like a fountain in front of which it all takes place. With the Wachowskis so often finding inspiration in the realms of comic book fare and Eastern influences, it is hard not to assume that they are perhaps not a little enamoured with the bloodier, splatter, aspects of Eastern cinema, most prevalent in Japanese films such as Tokyo Gore Police and Machine Girl.

Rain cuts a reasonably passable figure as an action hero, having landed the role thanks to his impressive performance in a similar vein during a scene in Speed Racer. Naomie Harris (28 Days Later) gives the film its template prerequisite of a feminine counterpart to balance out the genders, but is rarely called upon to act as more than a catalyst for the plot to move to the next fight sequence or to give a basic scream and panic atypical action film female performance. She goes through the process, as does Ben Miles, in a manner that shouts by-the-numbers and given what they had to work with it's unsurprising that they fail to lift their game for this. Reportedly, with the Wachowskis unhappy with the original script by first timer Matthew Sand, they enlisted their friend, and Babylon 5 creator/writer J Michael Straczynski to rewrite the entire piece; a feat he is pleased to proclaim he managed in a mere 53 hours. His speed is to be applauded (if true), and there are many who see his writing on Babylon 5 as a high point for modern television science fiction, but here it seems the expediency has blown away any originality, leaving behind only cliché and kitsch though often not in a manner that would make them enjoyable.


This is, however, an action film, and must be judged on those merits especially. For the most part the fight sequences do their job, with there being little that won't tickle any keen appreciator of over-the-top screen melee combat. The problems arise when guns enter the fray. With this being set in the present day, the constant “why don't they just shoot them” niggle that lies at the back of an audience's mind during any such escapade will start to itch and this has clearly been seen as an element worthy of tackling. As such, the ninjas in question no longer have to rely on martial arts abilities handed down through generations, but instead seem to have taken on almost superhuman powers. This evens things up to some degree, but also pushes the action into realms that whiff of the kind of B-movie desperation that even Silver and co must have baulked a little at. McTeigue tries to throw in a few interesting shots, but most will remind viewers of similar fare from other, better, films. As the camera pulls back whilst armed men of an unidentifiably generic SWAT style team survey a blacked out room to see the plethora of ninja crawling about unheard above their heads, I defy you not to come up with your own idea as to where you first saw such a device for building tension.

This is the grand problem of Ninja Assassin as well as its greatest asset. It doesn't strive to come up with anything genuinely new, rather instead it throws in an amalgamation of plot devices, scenes and settings that have been covered a thousand times before and asks you to simply sit back and let the bloodshed wash over you as a visual spectacle. Little in terms of plot makes a great deal of sense and there are a few moments that will have you perhaps even laughing, such as a pair on the run, who can apparently be smelled by the pursuing assassins, parking their car, complete with throwing stars lodged in the bonnet, blood splattered paintwork and knife holes through windscreens, right outside their motel in plain view. In this world that is considered passable, as is the healing of wounds by means of meditation and assassins who can throw ninja stars with the speed and accuracy of tracer bullets. Trained combat squads being able to shoot straight is a feat saved for the final showdown, as otherwise it clearly wouldn't be fair, and the manner in which the army of good guys storm the gates for this finale may have your jaw on the floor. Credulity is certainly not the name of the game here.

Harris and Miles pop up to make sure there is a suitable set-up to the conveyor belt of fight sequences and Rain, to his credit, manages to look athletic enough to continually oblige. Limber and athletic he may be, but he falls down as an action hero simply because he lacks the charisma of a Tak Sakaguchi or the like. Cartoonish characterisations must be tackled in a manner that displays either a tongue firmly wedged in the cheek or a knowing look that presupposes the actor knows the level of the material he has found himself contracted to, and unfortunately Rain shows neither. Wet, and looking every inch the floppy fringed front man of a boyband, he admirably works against an image already constructed for him but ultimately fails to divert those wistful stares into something passing for enigmatic soul searching. What we are left with is a film that has one rookie director, two writers (between them coming up with a single script that takes in the sum total of 53 hours work), three production companies (Legendary Pictures, Dark Castle Entertainment and Silver Pictures) four strong minded producers but lacking a singular star presence. There is a maxim that states “a camel is a horse designed by committee”, well I can only assume this is the cinematic equivalent. It isn't without merit, and if you can turn off your brain, suspend disbelief, and accept that there will be some thumb-twiddling downtime between extreme bouts of bloodshed then you may just find the gory payoffs are enough to keep you satisfied - just be ready for some of the worst scripted Mr Miyagi-like pearls of wisdom Western cinema has yet poured across Eastern traditions with a healthy side dish of ham.