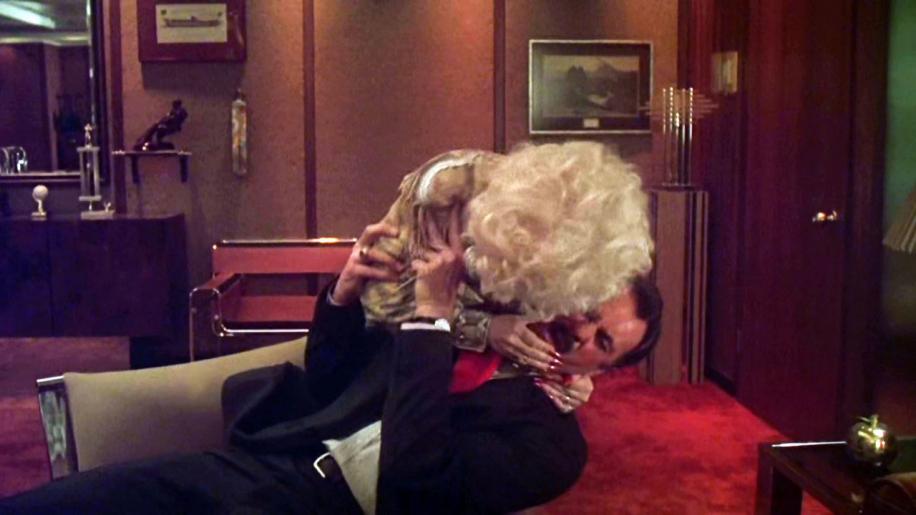 This anniversary DVD presents the film in its original aspect ratio of 1.85:1, with 16:9 anamorphic enhancement, and the first thing that hits you is the grain. It's very coarse, even more so in the optically-processed titles and fantasy sequences and it's these shots that really suffer in terms of detail reproduction. Regular scenes exhibit a decent amount of detail that gives the image a solid, filmic look. What also helps is that the source material is in excellent condition with virtually no marks or specks on display, and only a small amount of printed-in dirt is evident in the optical shots.


Colours have that slightly subdued quality that seems to creep in on films of this age, with reds especially taking on an orangey tint, but flesh tones are surprisingly well captured and hues don't bloom or bleed. The black level isn't exactly deep, but it'll do for a 25-year-old comedy. Edge halos are practically non-existent and compression is excellent given the abundance of grain. The Dolby Digital 2.0 Stereo mix is adequate given the age of the source material. Dialogue can take on a boxy quality at times, although it's usually intelligible enough. Music has a good amount of fidelity, especially that famous opening song, but I detected no real sign of stereo imaging. The film was originally mixed in mono, and this stereo track doesn't try to break out from those confines. It adds a touch more sparkle to the music, but to be perfectly honest it sounds virtually identical to the mono track. I'll start with the audio commentary. For the first half an hour the participants (the three female leads plus producer Bruce Gilbert) repeat what they say in the featurettes, and then basically just sit back and watch the movie with a few comments thrown in. Dolly Parton squeals a lot, and the whole thing is very stilted and awkward and not really worth your time. The 'Nine @ 25' featurette runs for 24 minutes and gives us a few soundbites about the making of the movie. Thankfully Dabney Coleman alleviates the repetition with a few dry quips, and it's a pity he didn't take part in the commentary. The 'Remembering Colin Higgins' featurette, a 4-minute tribute to the deceased director/writer of the film, follows the same 'talking heads' template and is too short to be of any real value.


The selection of 10 deleted scenes run for about 11 minutes; some are mere extensions and others are scenes in their own right, like the knowing sequence where Judy teaches a new employee how to work the photocopier. No context is provided for the removal of these scenes, but the movie feels overlong as it is and needed further trimming down. The gag reel is the usual rough-looking assembly of howlers that's funny to everyone except the viewer, running for just under 6 minutes. The karaoke video is a jumble of scenes from the movie set to Dolly's song, sans vocals with the lyrics at the bottom of the screen. The original theatrical trailer is also included. 9 to 5 isn't as good as I thought it'd be (it's somewhat self-indulgent), but it's got a certain wit and timing that hold it in good stead some 25 years after release. This DVD does what it can with the A/V side of things, featuring a solid transfer and acceptable audio. The extra features suffer from a bit of repetition, and some are just plain boring, but it's an admirable effort. This disc really is for fans only, but if you've been waiting for a decent edition of this movie then you'll be more than happy with this DVD.