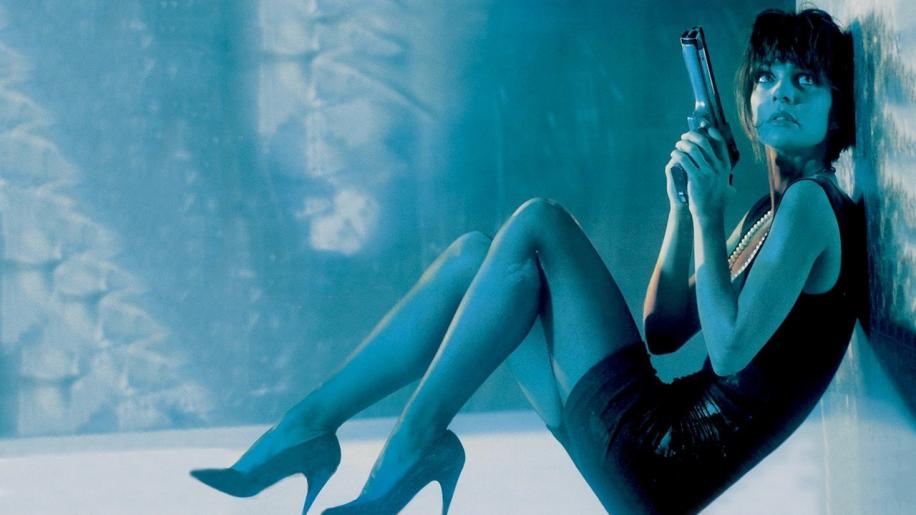 Besson, as I have said far too many times, has always been accused of style over substance, he demonstrated this with Subway and Le Denier Combat and to some degree with the jolly Fifth Element romp. However two of his films from the early nineties surely put paid to that statement. Both La Femme Nikita (from here on in referred to as just Nikita) and Leon had the style we have come to know from this European film-maker however at long last they also had plot and character depth. It was a perfect marriage, style and substance and Besson fans had always suspected that he was more than capable of such heights.

Nikita's (Anne Parillaud) young, afraid, abused and a drug addict. On committing murder during a raid on a pharmacy she is sentenced to life imprisonment and she will have to serve a minimum of 30 years. The powers that be, powers that are never really explained but we understand them to be controlled by the government of the day, decide she is given a second chance at life. Serve her country as an assassin and, after training, she will walk free. Refuse this and she will undoubtedly fall under society's radar; she takes the first choice.

After 3 years of brutal training by the state and (Tcheky Karyo) 'Bob' she is free to go on the understanding that she answers any and all assignments given to her. Until these calls come through she is free to live her life as she sees fit and she does so with a vigour previously unknown to her. She falls in love, rents an apartment which she lovingly restores and goes on holiday to the most romantic of places. Then the calls come in, and she realises that there is a cost to pay for the freedom she bargained for those few years ago.

There are many similarities between Nikita and a number of other artistic works in print and on celluloid. First out of the hat is, funnily enough, My Fair Lady. Nikita is taken from her surroundings and moulded into the shape that her own Professor Henry Higgings, in this case 'Bob', wants her to be. Not only does she emerge butterfly like from the cocoon of her miserable previous existence as a superior assassin, but also a graceful, beautiful young woman. Easy in any setting, comfortable in any surrounding it is as though 'Bob' has taken his own flower girl and produced a woman of nobility.

Second on the list is Kubrick's A Clockwork Orange and the similarities here are most evident. Both Nikita and Alex share similar backgrounds; they revel in the gang lifestyle, they enjoy the freedom it gives them, they abhor structure and society's rules, and of course both get a kick from a good degree of the old ultra violence. Alex and Nikita are imprisoned by the state for the crimes they have committed, both are offered a choice to reduce their sentence and both are ultimately used by the state for the state's own ends. Take for instance the scene in which Nikita fights with one of the instructors during her training, the dance afterwards, the music in the background all evoking memories of Alex and the rape scene or Alex and his droogs confronting another gang in the disused ballroom. Even some of the electronic score by Eric Serra harks back to some of the brooding themes introduced by Wendy Carlos. Some people think the connection is slight, however I would go much further than this. It's far too blatant, A Clockwork Orange must have been at the back of Besson's head when he was writing the script.

Those two connections apart, and I don't for one moment consider them negative points, the resulting feature that Besson wrote, produced and directed is as stylistic a thriller as you will ever long to see. The tone is dark, yet at times somewhat humourous. The journey which Nikita embarks upon is fraught with danger, yet at her core she is a fragile young woman. She is seemingly isolated yet longs for love that she has never experienced before. As we follow her journey we empathise with her more and more. At the start she is a despicable being, and rightly the court decides to throw away the key. Throughout her training that feeling rarely leaves us as she is still rebellious, still unappreciative of what she has been offered. Only when we understand what she has to go through as a trained assassin do we offer her some comfort as we realise that for ever more she will never be free, never have her own life to live. What she had yearned for all of her life she still cannot gain; she has gone from single cell to a larger prison but still a prison nonetheless.

Besson employed the talents of people he knew and trusted. Back comes Thierry Arbogast as director of photography and he superbly lights the scenes which Besson has mapped out for him. The steely blues at the start of the feature, the bleak room Nikita is forced to reside in whilst her training is undertaken, the magnificent, detailed restaurant where she practices her trade for the first time and finally the clean, bright world Nikita is released into to live her life. All of these scenes are set differently to show the differing state of Nikita herself; the steely drug addict as she started out, the bleak nature of her existence whilst trapped in the training area, the realisation that she has matured from caterpillar to butterfly in the restaurant and finally the hope she feels as she embarks on her new life.

Eric Serra would come back to the Besson fold after scoring Le Denier Combat and Le Grand Bleu. Like Arbogast he would continue his relationship with Besson through Leon, The Fifth Element and Joan of Arc. A notable composer in his own right his other works include Goldeneye and Bullet Proof Monk. Like the steely blues in the frame he wanted the emotion to flow from the music and composed a wholly electronic score when other more traditional instruments might have been used by other composers. Like the individual frames though this music perfectly suits the nature of the film and the characters held within.

Last but never by any means least we have Jean Reno. Reno and Besson have been friends for some time, making movies initially for the sheer hell of it. In this feature Besson gave Reno a pretty wide berth not even writing a script for him. Ultimately Reno was given a brief understanding of the scene some 30 minutes before hand then told to get on with it; and get on with it he does so well. His role would be reawakened later in Besson's next feature Leon, and audiences world wide only thanked Besson for this. Reno's character in Nikita is superb, quick, dark, uncompromising and brutal. We wanted more screen time from Victor, The Cleaner, and we finally managed to see him in all his glory in Leon.