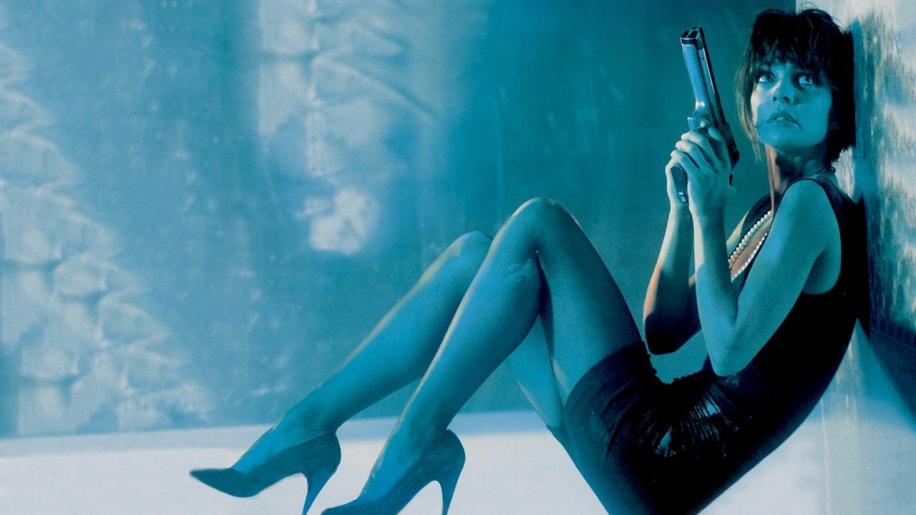 When I look back it really does make me wonder where all the years have gone. Has it really been 18 years since Nikita was made? Wow! The last twenty years have flown by in such a flash for me that it almost makes my life feel surreal at times. I'm sure many of you will reminisce as I do now as to how fast life can pass you by.

Anyhow, enough of the reticence, it was indeed 18 years ago that a certain Monsieur Luc Besson pulled together La Femme Nikita. Having made his mark with The Big Blue and Subway he was someone who had put himself onto the radar very early on as an upcoming cinematic visionary.

While talent and potential are promising attributes to possess they can also flatter to deceive. Monsieur Besson's third major faring does however go someway to prove that he certainly wasn't out to deceive anyone. Instead it was clear with Nikita that he had far more serious intentions and wished to become someone more worthy of note.

Nikita, a young French delinquent girl, mixed up with an impressionably wrong crowd; a product of drug misuse and experimentation gone drastically wrong. Petulance and experimentation in a drug fest environment can lead you along long and convoluted roads but tread them for long enough and they'll eventually lead to the same destination. Drugs not only destroy lives, they destroy societies. Many of you from within the last four decades will relate to that or understand the confused hedonistic promises that the modern world has entrusted upon the young. However, neither the youth of today nor seemingly the youth of yesterday wished to understand or learn from others mistakes. Why is that so? Learned wisdom has been so freely available?

So, here we have a group of young drug addicts desperate for a fix who break into a pharmacy. They've got guns, they know how to use them and the ill-fated robbery goes so terribly wrong so very quickly. When the police arrive on the scene matters get completely out of hand and there's total carnage. Besson paints a beautiful cacophony of bullets, isolates the death of innocence and the wrongs of crime and taints it with an impulsive belief of rightfulness. The opening sequence sets the stall for the film and it pretty much whets the appetite for what is to come.

Although it's not quite total carnage, one does survive. When you're as high as a kite and enjoying a psychotic ride then the world around you however real, will appear very much a cartoon like experience. Nikita lives through it only to wish that she hadn't. A life sentence of at least 30 years for someone for so young means a lifetime is about to go to waste.

However, where a great despair collides with a greater need then there's scope for a compromise. Besson has taken a wasteful 19 year old, encaged her within a futile set of circumstances and then directed the film towards serving a purpose.

The French police stage Nikita's death and write her off of the living register. Dead to the known outside world she is left alive only at the behest of a highly secretive government agency and left alive only to serve their purpose. Her debt to society remains immense but her terms of repayment now become indelible as a fait accompli.

She's a ruthless murderer, she's naively detached enough to be used for her talent and they of course have a need for her. Kept locked away for three years she's trained to become an assassin for the government. Birthdays come and birthdays go but her entrapment is a predicament that keeps her from ever being a normal person. Nikita's liberty is no longer of her choosing but the script adds much for you to capture a sense of growing maturity about her.

Anne Parillaud's performance is mesmerising. She is Nikita and Nikita is her. She plays the rake figured drug addict to perfection and no one could have played the role better. Nikita learns to grow from being an uneducated misinformed teenager into a beautiful young woman and Anne blossoms within the role. The product of the environment though, is much determined by the conditioning. Nikita is as ruthless as her nature, she was born with a twist of sadism, she has the ability to be able to kill without remorse and she was born to be an assassin. She knows it and everybody around her knows it. Anne Parillaud conveys it so chillingly and convincingly that you will also know it before the movie is out.

Bob (Tcheky Karyo) is the ultra cool I've seen and done it all, chewed it and spat it out hard man mentor. It's a good play off between the two characters; a sadistic mentor, mentoring a sadistic psychotic. Besson slowly opens up Nikita's naivety as she grows into a woman but Bob's character is kept cold enough and distant enough for no real warmth to glow between the two. There is in fact barely enough to radiate but there develops a womanly desire within Nikita for him as she enters womanhood.

When her time finally comes and on her 23rd birthday she's taken out into the metropolis for dinner. Amazed by the gesture from Bob, she foolishly believes it is a genuinely romantic one. Besson's script lulls you into a false sense of security of believing something will spark between the two. She finds out rudely and brutally enough that she means nothing to her boss and she means even less to the agency that have nurtured her. She is a disposable weapon, trained and invested in to serve a single cold hearted purpose. She is brought out to kill, to fend for herself or simply to die.

Besson re-enforces the fact no matter your social position or self perceived importance, you are in fact all alone in the cold, cold world. In order to survive as an assassin you have to be a chameleon. Given a new name by way of 'Marie' is merely an alias, the code name of 'Josephine' is the trigger to prepare her to serve. It's not easy. She's a beautiful young woman now and she has many other terms to reconcile with, one of those being love. Hooking up with Marco (Jean-Hughes Anglade) teaches her about her inner most affections and unlocks deeper wants and desires but it also starts to tear this young woman apart. Her love, her life is no longer for her to give or to share and it also lends this movie a surprising sense of heart.

The movie also has an intriguing flow to it and the injection of characters best serve the fervour no end. When a challenging mission goes wrong the agency decide to send in Victor Nettoyeur (Jean Reno) to help her out. He's a mop up man but he's far more sadistic than what you could imagine. Wearing his now infamous dark rounded sunglasses he enters the fray in an epitome of understated cool. His codename is 'The Cleaner' and with ruthless efficiency he does exactly that. When a mission goes off line he simply goes in and mops it up with such deadly precision it's bewildering. No he's not a bull let loose in china shop, he's a red hot razor blade slicing through butter; slicing through before you've even known it was coming, been or gone.

What I really like about Besson's script is that he keeps you within touching distance of what should be considered good and what should be considered bad. Murder is murder. Whether it occurs amidst wrongful criminal activity or whether it is for a more 'official' purpose, there is never any right in doing wrong. The script though, is far from perfect and has about as many potholes as you would expect from a Besson film but it does still nevertheless keep itself beautifully concise and hard hitting.

To its credit the movie keeps it real enough for even the most cerebrally challenged to realise that if you keep robbing people of their lives, then no matter what, it will eat at your own humanity. It not only stains the blood, it stains the soul.....and so, it eventually dawns on Nikita as she pleads with Victor not to kill so incessantly and without remorse, that there is a clear parallel between both him and her. The way in which Victor operates is exactly where she is headed and it's a place she doesn't want to be. It's a road to perdition.

If you've never seen this movie before, fans of Luc Besson would probably have you shot. It's one of, if not indicative of his better works. There is such a rawness and edge to this movie that even after 18 years it's not lost any of its magic. It's not as polished as Leon but that came a little while afterward and while Nikita's not perfect in comparison, it doesn't need to be. It just needs to be watched.