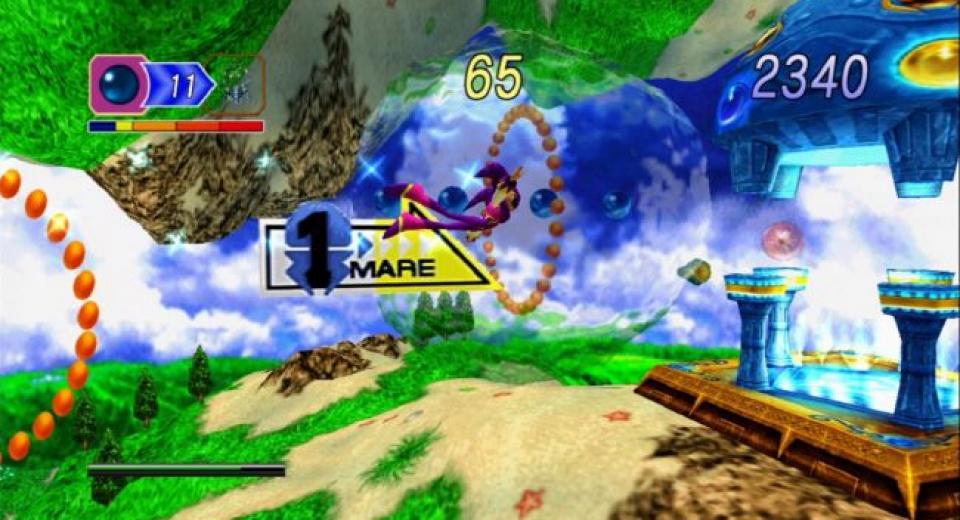 We’ve had a fair amount of HD makeover titles recently, but few can be as genuinely craved for as a spit-and-polish update on current consoles for the Sega Saturn gem NiGHTS into Dreams.  Developed in conjunction with a nifty new pad, it represented the dawning of the analogue control era.  Like all titles spoken of with misty-eyed nostalgic reverence, its legacy has been compounded by the fact that it was to fall into the “misunderstood classic” category.  A Sonic Team game that - shock horror - wasn’t to feature the spiky haired ring-collecter, it failed to truly resonate with a wide audience.

Not only was it not Sonic, it wasn’t quite like anything you could easily explain at the time either, and its short length meant a full-priced release in a pre-Rez world - ignorant of the wonders of letting rhythmic flow and aesthetically pleasing visuals wash over you - was a hard sell.  In the intervening years its cult status has been cemented by a PlayStation 2 redux and a pretty good Wii sequel.  Here though, available for download at a reasonable price and viewable on our now-standard big living-room screens, NiGHTS surely has found its home. Visually you have the choice to either play the new spruced up version (seemingly based on the PS2 iteration) or the Saturn original.  Gameplay-wise they are identical, but the HD make-over is tempered, and that’s a positive.  The smoother texture mapping, subtler lighting effects and reining in of aliasing retain just the right amount of the game’s charm without air-brushing away cherished memories with a heavy handed overhaul.

The striking imagery the game conjured up, which led the player through a myriad of fast-paced and luridly coloured magical worlds, was not the only potentially confusing aspect.  The gameplay itself was something of a mystery - in essence it’s a combo of time attack and score attack, executed by way of linear two-dimensional flight.

You primarily control NiGHTS, an androgynous figure rocking a figure-hugging purple leotard and jester’s hat, but in this world that passes for normal.  We’re in the realm of dreams, and two youngsters - Elliot and Claris - both have some charmingly innocent problems (Elliot is mildly bullied playing basketball by some older boys sporting polygonal flat-tops, the rotters!) that mark them out as sympathetic characters.  Their fates will cross with that of the dual kingdoms of Nightopia and Nightmare - no points for guessing which is good or evil there. The narrative means little, but somehow without the mighty tools of modern videogame story-telling, such as voice-overs and FMV so slick it’ll make your gran question reality, the duo of large-footed and cartoonishly cherub-cheeked youngsters help set the mood of innocence well.  If you don’t care, well the only thing you need to know about the plot in terms of how it affects the gameplay is the concept of dream energy called Ideya, represented by glowing orbs.

These come in five colours, and the maniacal Wizeman the Wicked plots to steal them and conquer the verdant landscape of Nightopia and eventually the world.  At the beginning of each level, you enter as one of the children, only for Wizeman’s minions - the Nightmaren - to pinch them and pop each in a mini-prison.  Your first task is to reach NiGHTS (he’s always about four feet away, making the task relatively meaningless), free him from his own bonds and let him recapture the Ideya.

Though NiGHTS moves only through flight, and this is not a platform game, there are some similarities to the Sonic titles, if only in essence.  Both Sonic Team creations relied on emboldening the gamer with a sense of freedom via speed, rhythm and simple controls, and NiGHTS performs as many loop-the-loops at high velocity as the fleet-of-foot hedgehog ever did.

Each level has you completing four laps against a timer, one for each Ideya captured.  You free the Ideya by collecting blue orbs and taking them to the floating prison; with the cage destroyed you take them back to the beginning of the level and that constitutes one lap, with the following three steering you on different routes.  The point is not simply to complete the levels, as that is easy to do, but to aim to get high scores as well.  So, once your objective is complete, you should use every second to zoom through rings, get acrobatic bonuses and thus gain a good grade. It’s a left-to-right affair, though you can choose to head back on your tracks, and clever level design masks the fact that for all the layering of foreground and background elements this is a two-dimensional course.  Yet, the way in which this visual sleight-of-hand is performed, combined with a few choices of route based on axis of entry into an area, make it feel far more expansive than the sum of its parts.

If you run out of time you’ll become one of the children and have to complete the level on foot, by either finding NiGHTS or taking any retrieved Ideya back to the base.  The use of pedestrian sections could be seen as a master-stroke, intended to enliven the feeling of flight in comparison, but that would be wishful thinking.  That may be a happy by-product, but those clunky sections are filler that could have been excised, walking around the environments only serves to highlight the limitations of the worlds and just how much smoke-and-mirrors have been utilised to give the impression of a bustling dreamscape.

The other concession to traditional game design is the use of boss fights, some of which offer you the chance to fly in a proper three-dimensional space.  Although they should be applauded for their atmosphere and lack of glaringly obvious weak points - no set number of telegraphed attacks to avoid followed by a giant red target to hit - they are easy to best and inhabit a sparse mini-level.  Good variety, but very much the relish rather than the meat in the sandwich. With only a handful of levels to attempt, longevity may be an issue for some.  The inclusion of the Christmas spin-off is a real treat for those of us who made playing it at yuletide a tradition. There are the requisite achievements and little bonuses like artwork and scores to pore over, but it’s NiGHTS replayability and infectious just-one-more-go aura that are the main draws.

The repetition of actions is pure old-school gameplay, the onus being on this early analogue controlled title's challenge to you, the gamer, to perfect every loop, make the dream-weaving aerial manoeuvring smooth and score big while you’re at it.  Like a racer, it’s not just about the opposition but how skilfully you can conquer the course itself.

It won’t be for everyone, and there’s no point pretending the game is perfect, but NiGHTS into Dreams HD is an absolute must for fans who’ve long since consigned their Saturns to that console graveyard of a box in the loft.  The joy of analogue control, taking flight across an imaginative multi-layered dioramic landscape whilst a cracking score rings out - even when slightly counterbalanced by the clunky on-foot sections - is, remarkably, still as enjoyable as it was back in 1996.