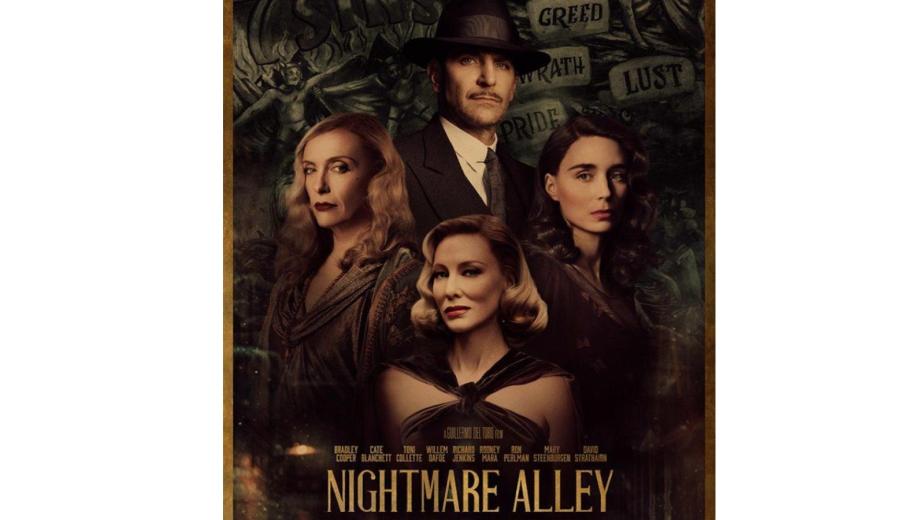 The long-awaited return of Guillermo del Toro brings a star-studded cast coming and playing in his none-more-black noir remake. But what exactly can del Toro bring to the classic genre?

“All my life I have been obsessed with two genres: horror and crime…..” - GDT.

While we all know what GDT knows and can do in the horror genre, his love of the crime picture, often much darker than even the most outlandish horror films thanks to those visits into the souls of desperate men, has so far gone unshared. Until now.

Coming across the William Lindsay Gresham novel this is based on whilst making Cronos, he has long-harboured a desire to make this film – not so much a remake of the 1947 Tyrone Power picture of the same name, but a more faithful adaptation of the book. And if you can’t have the pick of your films after winning a best director Oscar, then, frankly when can you?

During the early 1940s, Stanton Carlisle (Bradley Cooper – Guardians of the Galaxy, A Star is Born) is a man with nowhere to go. He stumbles into a travelling carnival and begins to do odd jobs for the carnival’s owner (Willem Defoe – Spider-Man, The Lighthouse) whilst beginning illicit affairs with both the fair’s ‘mentalist’ (Toni Collette – Hereditary, The Sixth Sense) and a naive young girl Molly, (Rooney Mara – Girl with the Dragon Tattoo, Carol). The discovery of their relationship forces Carlisle and Molly to leave and, together with the smarts picked up from quietly watching and learning everything from everyone and a sense of ruthless determination to succeed, set up their own act of mental agility, becoming a household name in the process. Yet several years later, Carlisle happens upon Dr. Lilith Ritter (a magnificent Cate Blanchett – Elizabeth, The Lord of the Rings), a borderline sociopath with a similar sense of ruthless ambition and together, the pair hatch a plan to remove large sums of money from the local wealthy establishment via acts of communing with the dead. But as the act leads Carlisle deeper and deeper into both his and the souls of his victims, his desperation to remain in control starts to cause irreparable damage to those around him. Including himself…

By any stretch of the imagination, that is an awful lot of plot. It’s a story with breadth and scope (often not seen like this within the genre) and it’s an often deliciously powerful look at a society that enables such acts of deception to be rewarded both in empty fields and in the most powerful hallways. Yet for a film that aims to be an adaptation of the book, rather than a remake of the original film, it steers awfully close to Edmund Goulding’s semi-classic noir, making many of the same mistakes it did along the way. All that plot demands space and even at 150 minutes, the simple mechanics of such a broad narrative simply takes up a vast amount of the air in the room. With a huge roster of characters (including the likes of Holt McCallany, Mary Steenburgen, Richard Jenkins, David Strathairn and of course, GDTs good luck charm Ron Perlman) to manage as well, the film feels all surface – the briefest of flashbacks to Carlisle’s past simply don’t amount to an awful lot of depth for a character who is onscreen for such a large amount of the film’s run time and, like with Tyrone Power before him, Cooper, with all his charisma and personality, can’t help but come across as a blank slate. And, as a result, it’s difficult for us to become emotionally attached to him and Carlisle in any way.

It’s a shame because the best noirs, the ones that have really stood the test of time as classics of the genre such as Out of the Past or In a Lonely Place with the likes of Robert Mitchum and Humphrey Bogart sharing a similar amount of screen time to Cooper, root their films firmly in character rather than plot, creating characters we know are deeply flawed but who we empathise with, our attachment growing as their predicaments increase. In place of this here, there are broader themes at play – the power and danger of belief (in yourself, in others, in the afterlife, in money, in power itself) courses through the entire film, as is the almost cruel nature of fate and destiny and Carlisle’s role in manifesting it. Yet as enticing and devilishly fun as they all are, it’s all built from the plot beats rather than character, not really adding to the depth of the film at all, as rather than being shown it, we’re simply being told it.

However, if this causes the film to be all surface, then what surface…

... Blanchett is absolutely mesmeric as a classic femme fatale for the ages and burns everything else off the screen

The rest of the cast are wonderful – most little more than extended cameos, but Blanchett is in a different league. And del Toro knows it. Shooting her as if she was Barbara Stanwyck in Double Indemnity or Rita Hayworth in The Lady from Shanghai, Blanchett is absolutely mesmeric as a classic femme fatale for the ages and burns everything else off the screen. And GDT continues that theme with a sumptuous production design, from the wide-open spaces of the carnival, itself feeling like a living, breathing character, to the ever-constricting Art Deco buildings of the city that seeks to confine Carlisle, the titular set of alleys down which he is continually being forced. As expected from someone with GDT's pedigree, it's baroque and sinister, dreamlike yet realistic; a rich, sinister, cruel look that darkens as the film plunges deeper into Carlisle’s soul. Which makes it even more of a shame then that Nathan Johnson produces such an unmemorable score to match these beautiful visuals.

Ultimately, GDT has produced a faithful remake of the original film, even if that’s not what he intended to do. The extra 40 minutes of run time adds little character depth to the original film, one which suffered the exact same issues, but at least it's a whole lot darker this time around. And all the better for it.

GDT demonstrates that he knows crime and noir almost as much as he knows horror. For a film with so much plot, it’s still somewhat of a slow burn and some may feel an awful lot of those 150 minutes come its conclusion. But it's rare to see a faithful and resolutely old-school noir picture in the modern multiplex and I for one hope we see many more.